Bitcoin SV is now a top 5 cryptocurrency in terms of market cap and has reached a new all-time high in terms of price ($446.19 according to Robinhood and $436.66 according to CoinMarketCap).

From January 10 to January 14, BSV climbed from #9 on the list of top 10 cryptocurrencies by market cap, to the #4 spot. BSV passed Binance Coin (BNB), EOS, Litecoin (LTC), Tether (USDT), and Bitcoin Cash’s (BCH) market cap in the process, and BSV became more valuable than Ethereum and BCH while doing it.  Let’s take a look at the events related to BSV that took place in the cryptocurrency market over the last five days.

On January 14, BSV hit a new all-time high of $446.19, passed Tether (USDT) as well as Bitcoin Cash (BCH) in terms of market cap and became more valuable than BCH for the very first time in its history. 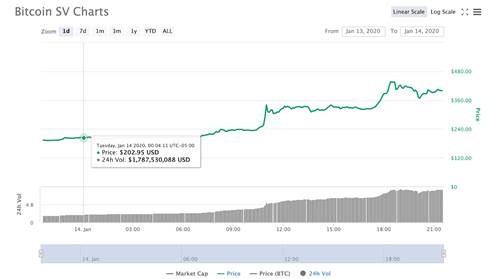 What led to BSV’s rapid rise?

Several events took place on January 14 that can be considered contributing factors related to BSV’s market movements on January 14.

For starters, a new development regarding Dr. Craig Wright’s legal battle with Ira Kleiman was published by the court. Dr. Craig Wright has “notified the Court that a third party has provided the necessary information and key slice to unlock the encrypted file [for the tulip trust].” Many people see this event as a positive development for the BSV ecosystem.

However, that event happened later in the evening. So what caused BSV to climb in the morning and throughout the day?

It is important to remember that BSV is the most scalable blockchain out of any of the existing crypto networks. This allows companies to build market-disrupting businesses that add tens of thousands of transactions to the blockchain per day when they use BSV in their stack. From an enterprise and investor standpoint, many observers see the value in the utility BSV has, and many who were on the sidelines–especially in Asian countries–put some skin into the game on January 14.

And finally, there are several positive events on the horizon for the BSV network. The Genesis Protocol upgrade takes place on February 4 and will remove the BSV block size limit. The CoinGeek London Conference will be taking place on February 20-21, and more information regarding Dr. Wright’s legal battle with Ira Kleiman will be released over time. All are events that individuals and investors in the BSV ecosystem are looking forward to.

Be on the lookout for Bitcoin SV to pass Ripple’s (XRP) market cap in the near future, because as the only blockchain that is being used by both consumers and enterprises every day to create and store value, BSV is bound to make the leap to #3 on the top ten list of cryptocurrencies by market cap sooner than later.

Early ‘crypto’ backer Roger Ver has been fingered as the individual whose alleged financial shortcomings caused a recent halt in withdrawals at an exchange in which he is an investor.

Sopnendu Mohanty also said that the MAS would enforce a "painfully slow" and "extremely draconian due diligence process" for digital assets firms to gain licenses to operate in Singapore.