Home » Interviews » Brendan Lee: How to use a digital signature to show control of a Bitcoin address

Do you know how public and private keys are generated? Would you be able to verify a digital signature? If your answer to either of those questions is no, there’s no need to feel embarrassed as you are not alone! For all the articles and opinion pieces on the internet about Bitcoin, there is still a distinct lack of understanding around how the technology actually works.

On this week’s CoinGeek Conversations, Charles Miller has re-enlisted the help of Brendan Lee, Training and Development Manager of the BSV Blockchain Association, to help him get to the bottom of a few key concepts.

When the two last spoke back in February 2021, Brendan covered what really happens when a transaction is made on the Bitcoin network and how exactly coins move from one wallet to another. This time Charles wants to find out what a digital signature is and how it can be used to verify ownership of a Bitcoin address.

First, they discuss public and private keys, with Brendan explaining that the two keys exist as a pair, with the private key generated first and the public key produced cryptographically from the private key.

The conversation then moves on to Bitcoin wallets, where an individual’s private keys are stored. Brendan says that Electrum, a wallet software that has some additional features, is a good way to allow users to demonstrate their ownership of keys by using those keys to sign messages and create digital signatures. Brendan explains that a user needs to first pick an address and type in a custom message to generate a signature. Once this signature has been created, any other user can decode and verify the signed message provided they have the custom message, signature, and public key. 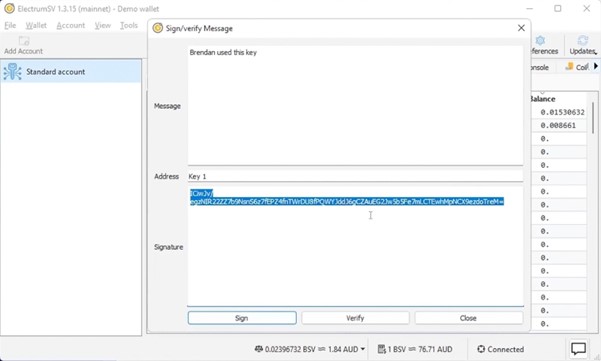 While the technology might seem complicated, Brendan says that the mathematics used to generate signatures and verify keys were not anything new when Satoshi utilised them in Bitcoin software.

“He wasn’t doing anything significantly new; he was just taking something that existed already, was well-tested, very proven, highly trusted as a technique and then applying it as a digital cash system,” he says.

Charles and Brendan also do a practical demonstration on Electrum, showing how it can be used to prove control over a specific set of private keys. This is particularly interesting given the fact that this was how Dr. Craig Wright demonstrated his control of the Satoshi keys to Gavin Andresen in 2016.

For more about Bitcoin technology, see this previous CoinGeek Conversation: Brendan Lee: What really happens when you make a Bitcoin payment

Hear the whole of Brendan Lee’s interview in this week’s CoinGeek Conversations podcast or catch up with other recent episodes:

You can also watch the podcast video on YouTube.

Please subscribe to CoinGeek Conversations – this is part of the podcast’s ninth season. If you’re new to it, there are plenty of previous episodes to catch up with.

Here’s how to find them:

– Search for “CoinGeek Conversations” wherever you get your podcasts

Africa has lagged behind other regions in the development of legacy systems, but with its rapid blockchain adoption, it can leapfrog its peers, Kashifu Inuwa says.

Nate Lindley has been working hard at iterating on his NFT card game 1000 Blades for an even more fun experience with Season 2, to start early next year.