Blockware Solutions LLC, a BTC block reward mining equipment and hosting provider, has been sued by one of its clients for negligence, fraud, and breach of contract. The client, Faes & Company (NASDAQ: FAESOX), claims that Blockware lied about owning hosting facilities and is demanding $250,000 in damages.

The lawsuit, filed in the Northern District of Illinois, claims that Faes purchased 50 BTC miners from Blockware in October 2021. Blockware would host and operate these machines as part of the agreement between the two companies in one of the server facilities it claimed to own.

However, Faes alleges that Blockware lied about owning the facilities. The company relied on third-party facilities, which according to the plaintiff, “lacked reliable power (likely due to a limiting contractual arrangement with their energy supplier), so the operation of the miners was and is regularly subject to interruption or curtailment.”

Blockware was well aware that the miners experienced significant downtime but continued to advertise “zero downtime” to its clients, Faes alleges.

Faes alleges that the average uptime for its miners at Blockware’s facilities was less than 70%, with the miners having been largely offline throughout November 2022. Since October this year, the company estimates it has lost thousands of dollars a month due to the downtimes.

“In fact, since approximately October 20, 2022, all 50 of Faes’ miners at Blockware’s Pennsylvania facility have been offline without justification or even explanation. Assuming a [BTC] price of $20,000, this represents a continuing loss to Faes of approximately $5,000 per month after deducting expected energy costs and hosting fees,” the lawsuit says.

Despite the downtime, Blockware has raised the power rates from $0.068 to $0.08 kW/h, with its management blaming it on “unprecedented cost inflation.”

Faes accuses its business partner of negligence, breach of contract, deceptive trade practices, and fraud and demands a trial by jury.

Blockware has dismissed the accusations, expressing confidence that the lawsuit won’t stick.

“We disagree with all statements and claims in the lawsuit. We are confident it will be tossed out from the court…we have honestly served this industry for over 5.5 years, and this has been [the] first filed lawsuit against us,” CEO Mason Japp told one outlet.

While Blockware fights off fraud allegations, other BTC miners have fared much worse. As CoinGeek reported recently, one of the world’s largest BTC miners, Core Scientific, filed for bankruptcy, with the bear market and ‘crypto contagion’ to blame.

The listed miners are also facing their struggles, with Bitfarms (NASDAQ: BITF) recently being threatened with delisting by Nasdaq due to poor price performance, while Argo Blockchain (NASDAQ: ARBKF) was temporarily delisted by the London Stock Exchange.

That BTC miners have been struggling in 2022 is an open secret. However, a recent report by Hashrate Index, a block reward mining data analytics firm, has provided better insight into the extent of their struggles.

The report revealed that public BTC miners owe at least $4 billion in collective debt. Core Scientific (NASDAQ: CORZW) tops the ranks with $1.3 billion in liabilities, even as it strives to restructure without liquidating its assets. Marathon Digital Holdings is second with over $850 million worth of debt. 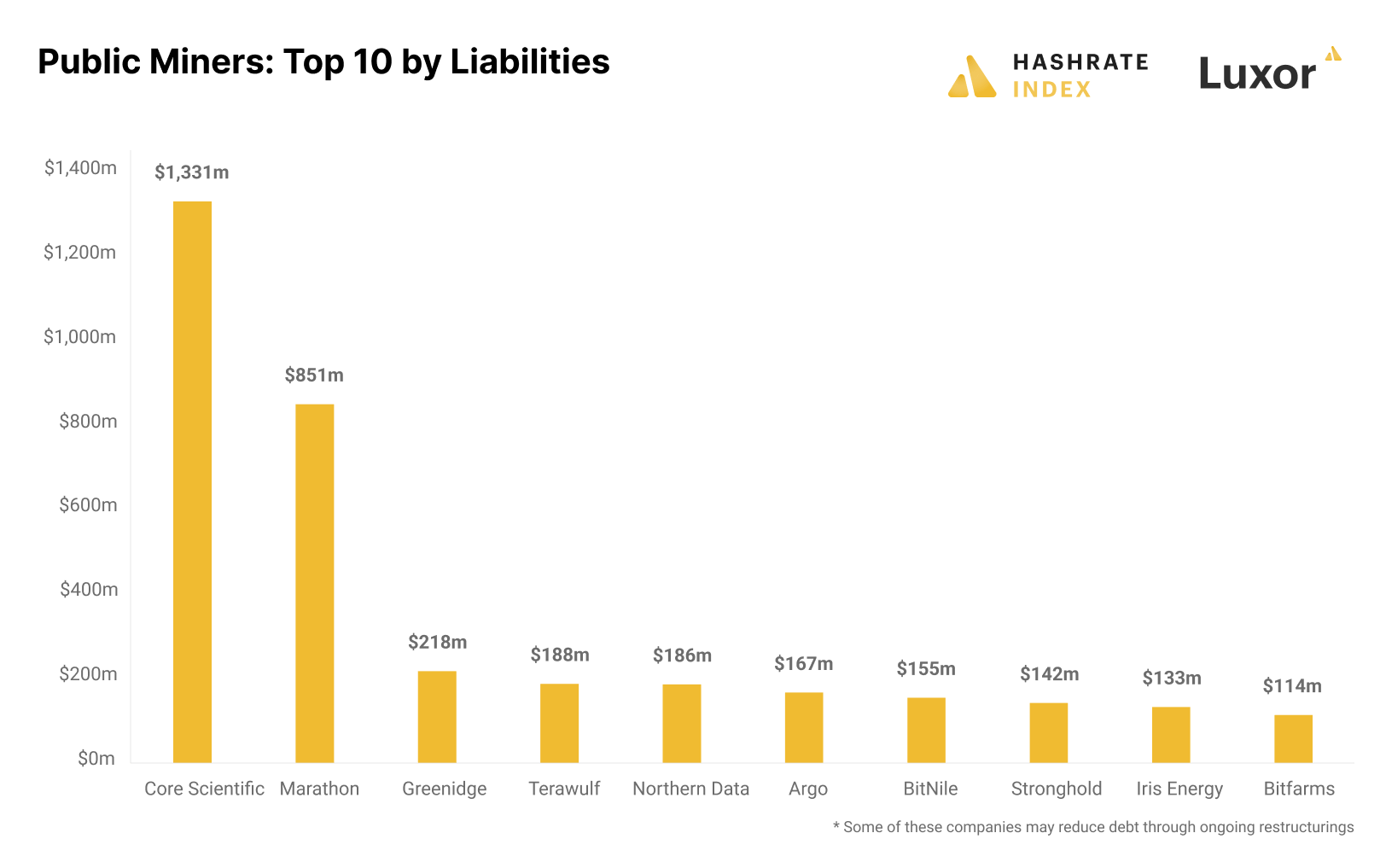 As Hashrate Index observed, most miners took on heavy debts when times were good, and BTC was trading at $50,000 and above. However, as the bear market bites, these loans are now haunting the miners, forcing them into restructuring or bankruptcy.

“Due to the unsustainably high debt levels in the industry, we will likely continue to see more restructurings and potentially some bankruptcies. We have started to enter the part of the cycle where the weak players are flushed out,” the report concluded.