Home » Editorial » AI for president: Can we phase out corrupt politicians?

This post is a further exploration from last week’s topic, “Ai for Governance: Can governments be replaced with decentralized intelligence?” Here, we focus on higher level AI potentials in conjunction with blockchain technology.

The concept of artificial superintelligence is one that has launched a hundred films—two hundred, actually. Robot uprising is a common theme and apocalyptic theory, so much so that even industry big names like Stephen Hawking and Elon Musk have expressed worry over perceived threats of a technological singularity.

While it can be disturbing in many ways, it’s also undeniably impressive. Most of history would cite the birth of automata in the context of computer science as something that started out in the early 20th century. But interestingly, the concept of automation in the context of mechanical engineering and the earliest records of something so close to robotics date back to over 800 years ago, from a man known as Al-Jazari. He started using cows and other animals to run machines, later ditching them in favour of the unlimited and almost zero-maintenance cost of using running water to keep machines fully automated. His works looked like this: 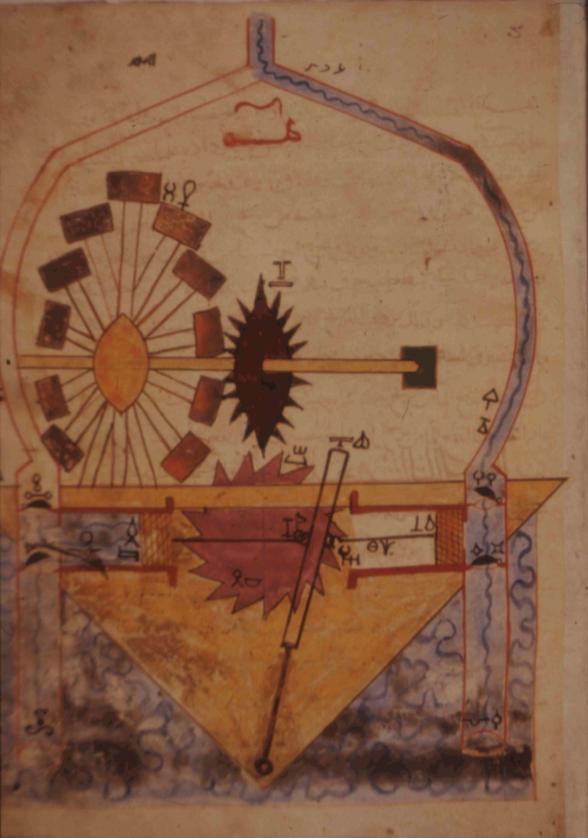 Fast forward to now, and several human jobs are at the verge of getting phased out in favour of automation. It started with blue collar jobs, but is quickly inching its way into more sophisticated positions. As early as now we are already getting glimpses of far more advanced tech challenging those of us who used to think we were safe from obsolescence.

AI and blockchain are two of the biggest emerging technologies today and are now being combined to automate managerial and governance decisions as well as recurring processes both for private organizations and government agencies. How high up in governance can we take this transition?

Can we encode crucial decision-making into smart contracts?

Ultimately, I think the prevailing culture and education has a lot to do with how much or how little corruption takes place in a country. Education and awareness help people recognize and investigate corruption when it happens; culture (or “values,” “morality,” etc.) keeps them from engaging in it in the first place.

But in a world where corruption has become a seemingly accepted norm—a world where we are already very much drenched in it, can we start the clean up using technology? Transparency—one of blockchain’s biggest values—is crucial in eliminating corruption.

I reached out to computer scientist and University of London senior lecturer Dr. Andrea Calí, who works with data science and artificial intelligence. Dr. Calí agrees that AI-infused smart contracts have vast implications for impartiality.

“A contract is intended to be as deterministic as possible, so that the range of interpretations in its execution is minimal. By contrast, in crucial scenarios such as wars or governance, decisions have to be taken by considering a variety of aspects, including emotions, culture etc. The potential usefulness of AI in smart contracts is enormous.

The mechanical, deterministic and ‘soul-less’ execution of a contract by an AI system is its strength rather than a weakness; contracts in the future will be clearer and fairer, and their execution will be impartial because the interpretation will be ultimately left to those who design the rules to interpret the contracts — a knowledge base in an AI system. Automation of contracts will allow individuals and institutions to execute contracts without the control of external authorities, lowering costs and uncertainty,” Dr. Calí wrote.

He states, however, that while AI has its advantages, crucial governance decisions may not be its strong suit. When I asked if he thinks it’s possible for artificial intelligence to take over this aspect of governance, he states that it’s not likely, as AI is “not real intelligence.”

“Artificial Intelligence (as recently explained by Prof. Nicola Leone, who is an authority in the field, in an interview) is a set of tools and algorithms to solve certain computational problems, or more generally to solve problems that are translated into computational ones. Governance needs to start from a higher ground, which involves principles and ultimately moral values.

While AI can provide relevant information that would be difficult (or impossible) to discover manually, AI is not real intelligence –the issue is an important one and I agree with John Searle (see his Chinese Room argument), Robert Koons, David Bentley-Hart, Edward Feser etc. that no machinery can have any proper intelligence, let alone consciousness.”

This said, AI can be a highly useful aid for governance once the principles and directions have been established by proper (human) intelligence. The “garbage in, garbage out” principle is always valid – deductive systems can produce good results only if they are fed good information,” Dr. Calí wrote.

Dr. Paolo Di Prodi, a senior data scientist at FortiGuard Labs who also took part in the discussion last week, agrees that the challenge is not in encoding decision-making skills into smart contracts, but in developing the machine learning and AI protocols to put in the code.

“Any rational and objective decision making process can be put down in a formula or algorithm, if you can’t then it is subjective. I don’t think this is an issue with smart contracts,” Dr. Di Prodi wrote.

Both of my resources do not think AI can be relied on for diplomatic relations—a highly sensitive aspect of governance.

“In diplomatic relations, decisions are to be taken by considering a variety of inputs. And while the psychological aspects can be somewhat modelled, replacing human decision-making with AI is ultimately impossible unless the decisions to be taken are merely a deterministic, mechanical process,” Dr. Calí wrote.

“Diplomatic relations are ultimately human relations. Therefore my position is that machines will never be able to replace humans in the field. With this I do not mean that AI is useless; on the contrary, AI technologies such as deductive databases are already able to provide vital information to decision makers.”

“We all know there are different ways to look at data and each country will provide a different perspective [on diplomatic issues]. Think about how the Blair government decided to go to war—the Chilcot Inquiry in 2011. Based on unreliable threat intel which nobody could have verified, an AI could just base its decision on available information and not able to go and do an independent investigation. We would need an international police android task force to perform those kinds of investigations with all the problems associated. And of course, that’s something current technology cannot provide right now,” Dr. Di Prodi says.

“In terms of diplomatic relations between different countries it could definitely aid the decision process if there is a transparent data exchange process that will allow optimal decision processes. One famous example is the prisoner dilemma where two prisoners will act to maximize their utilities reaching a Nash equilibrium (sub optimal) but not a Pareto global optimal which will require both parties to exchange their intentions and payoffs.”

“The problem of sharing information in a limited resource environment (think water and oil) is that competitive strategies work vs a cooperative strategy—where every player or most of them are required to be honest. This is a well known problem in socio-economics and I am not sure we will be able to solve it with AI.”

Furthering my diplomatic relations topic, I brought up my idea of global, blockchain-based consensus for international disputes to Dr. Di Prodi, but even that did not make the cut. “I imagine a world where issues that can be taken to the International Court can instead be decided upon by neutral parties from anywhere in the world through a blockchain-enabled voting system. Instead of years, decisions can be arrived at faster,” I wrote to Dr. Di Prodi. To which he replied:

“Yes, but human parties will always obey the basic principle of self-preservation and therefore could never be considered neutral. Think about a new proposed law which says I could only consume 2 gallons of water because we have to donate to Africa. Would all the people in developed countries vote for yes? I don’t think so!”

One of society’s biggest questions: can we phase out corrupt politicians?

Probably not. But there are definitely a lot of benefits—we can corner them to some extent.

“On the positive side, I see two main aspects. First, decision making will be enormously aided by AI system that extract and deduce knowledge that would be impossible to obtain manually. The areas of Big Data and Data Visualisation are already a witness to this potential,” Dr. Calí says.

“Second, the automated execution of certain tasks will guarantee fairness in contracts and disputes will be resolved more impartially; the contracts, in addition, will be more clear, with less space for corruption and bias. All of the above holds in addition to the already known advantages of automation, that is lower costs, faster execution, etc.”

Theoretically, if it comes to a point where we have aggregated so much data—enough to build a machine learning system that can pinpoint patterns and make substantial predictions, perhaps we can still arrive at better possibilities? Dr. Di Prodi thinks so, but that citizens should still vote on whether to approve or reject any decisions—something that can easily be done through a blockchain-based voting mechanism.

“Yes it could, but it will be always supervised by, say, a democratic decision to decide whether to accept it or not,” Dr. Di Prodi wrote. A combination of AI and required human input does seem safer.

Additionally, there are several blockchain projects that could increase transparency in governance, like the Lumiere Project. Such solutions will not surrender control but can aid in the fight. But then again, the problem is resistance. Much like with most social issues, the problem isn’t a matter of capability but rather, a problem of willingness—particularly from those who are in position to approve or reject solutions.

Both Dr. Calí and Dr. Di Prodi have pointed this out: it circles back to the problem of who makes the decisions on the foundations of the AI’s decisions, and what data is fed into the system. This can be skewed to serve the interests of their custodians.

Even with blockchain technology, a research by Kibum Kim and Taewon Kang at the 2017 OECD Global Anti-Corruption & Integrity Forum also echoes this concern, particularly for underdeveloped countries where they are needed the most.

“Applying the blockchain technology in the under-developed countries where corruption and red tape run rampant seems ideal. However, there are many stumbling blocks ahead. First, under-developed country may not have the infrastructure needed for adopting the new technology. Second, most corruptions in the under-developed countries stem from the top management or leadership level and it is unlikely that the blockchain technology will be diffused through the top-down approach (Lielacher 2016). No transformation can succeed unless it is built upon a strong political leadership and commitment ready to support the change process (Pilkington et al. 2016),” the researchers wrote.

If they are right, then we won’t be seeing the extinction of corrupt politicians anytime soon. So the conclusion of this article is: dammit.

If you are a researcher/professional who is looking into this use case of blockchain technology and have a different insight on the matter, or if you are exploring any other highly advanced implementations, we’d love to hear from you. The comments section below is also open for discussions.