Home » Editorial » Bitcoin vs. Gold: Which functions better as money?

When I first started researching Bitcoin in early 2018, I began to try to understand how precious metals such as gold and silver have functioned as money in the past and how relevant they are today. Gold is still looked upon as protection against inflation and volatility in fiat currencies. We have witnessed many examples of gold preserving wealth in times of crisis. Examples vary from Americans who held gold in the 1970s (high inflation) or 2000s (price rose from $300 to $1,900), Venezuelans who held prior to the recent hyperinflation, to those who held it when fleeing their countries from turmoil as Jimmy Nguyen explains below:

Naturally, I have begun to compare Bitcoin and gold as money as they have very similar aspects yet are radically different. The goal of this article is to explore both as money and ultimately attempt to determine if one functions more effectively as money over the other in today’s age.

Money does not equal value

While constantly posing this question to myself I have come to have a greater understanding of what money is and represents. The most important distinction I have learned is that money does not equal value. This implies that just because some good or service costs $1,000 that does not mean it is worth $1,000 of value. If no one decides to pay that price for it, then the merchant must lower their price to accommodate the market’s demands for the same good or service and vice-versa.

Additionally, value represents something that is intangible. If I pay $100 to see a show in Vegas, the value I received from that exchange is entertainment, happiness and a memory of the event.

Money is more of a tool to help us humans determine the value of a good or service. Today most believe that money is the equivalent to a fiat currency which is issued by a particular government or central bank. These entities, along with the commercial banks they issue currency to have varying control over the money supply.

Assets as protection against inflation

Some perceive gold and Bitcoin as protection against this control. The typical, naïve, libertarian interpretation of this behavior by the central banks mean that that the price in fiat of these assets must rise as banks inflate the currency.

The reasoning for this is simple to understand, if a hard asset with somewhat of a cap on its supply is denominated in fiat currency and more of that currency is printed without the corresponding value to match, then yes, the asset should rise accordingly. We have seen this occur many times in history as alluded to above.

‘Gold is an inflation hedge’

When I first met Dr. Craig Wright at the CoinGeek London Conference, I was struggling with this concept at the time, so I asked him about the distinction between gold and Bitcoin. His answer was that “Gold is an inflation hedge”. He has written about this subject before as well.

The Spaniards obtained lots of gold throughout this time period, but because of their misunderstanding of value, they ended up going broke since gold sitting in a vault doing nothing is actually worthless.

It is worth the value created from the investment of it, or for what we can get in return for exchanging it.

The Spaniards misconception that hoarding gold in their vaults was an accurate measure of their wealth is analogous to the HODL meme. HODL is the concept that simply holding Bitcoin in your Trezor will rise in dollars because ‘number go up,’

BTC supporters repeat this concept over and over as it is a pre-determined fact—which is why I labeled the view of how inflation factors in as naïve.

Bitcoin’s purchasing power is up in 2019.

US dollar’s purchasing power is down in 2019.

One gets less valuable year over year and the other gets more valuable.

Manipulative Keynesian Statists want to tell you what to do with your money. They don't want you to hold your money, they want you to spend it on lubricating their high velocity trash economy. They use inflation to force you to invest in the corrupt system. Bitcoin fixes this.

We are on the path of maximum pain, if you survive the journey you will know what HODL means.

I also believe this concept is still pervasive within the BSV society. 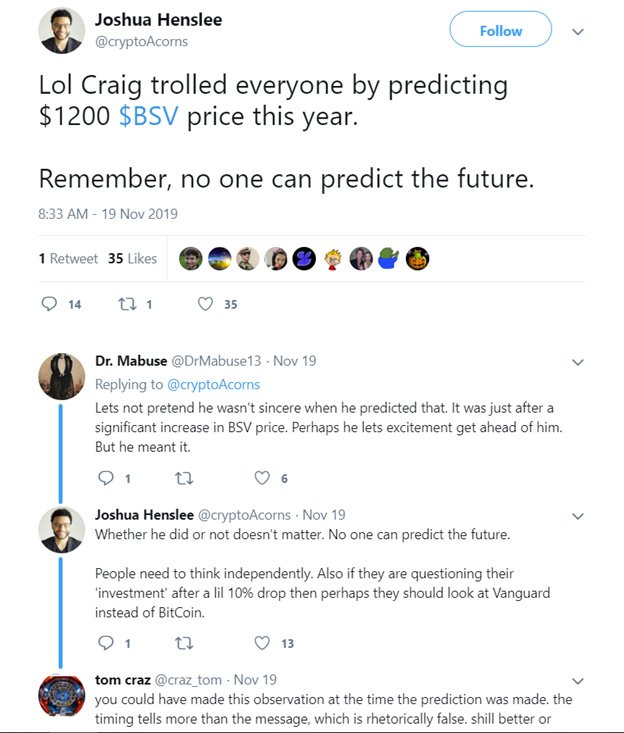 Lol Craig trolled everyone by predicting $1200 $BSV price this year.

Remember, no one can predict the future.

The idea that a fixed-supply asset will rise in price simply because of currency inflation (or just because the creator of Bitcoin says so) is not a given fact because the corresponding value of what one can purchase with that asset must necessarily rise to justify its fiat denominated price increase.

The free market prices goods and services as stated before. No one can justify paying $7,000 for BTC when all I can do is HODL it or give it to someone else, BTC in this sense is no more valuable than a pet rock.

People are treating Bitcoin like the Spaniards treated the gold in their vaults, which limit the potential value added. One of the functions of money is a medium of exchange—meaning that I can exchange money in return for a good or service. The better a money can facilitate trade, the more that money is used. The dollar is the most widespread used fiat currency which is a factor in why it is the reserve currency of the world.

Naturally the question arises, which is a better medium of exchange, Gold, Bitcoin or the Dollar?

Bitcoin (BSV) is and it is not close. I can send Bitcoin from A to B in less than a second. I cannot do the same with physical gold or dollars unless in person. As the Bitcoin whitepaper calls out, we typically cannot exchange gold or dollars without a trusted 3rd-party. The infrastructure built around these assets combined with the mesh network topology of the Internet make it particularly difficult to transact, limiting the potential velocity.

Now we must understand that the transaction of money between parties is what adds value, not simply holding on to it. Thus it follows that the money that is most capable of transacting with the most amount of people has the potential to be the most valuable.

Money must be divisible, and Bitcoin is up to 8 decimal places. The dollar and gold are inferior in this sense (pennies, ounces/grams). Bitcoin’s divisible property enables microtransactions which can open up aspects of an economy that we have not seen before. To be able to pay an entity a fraction of a fraction of a cent for a good or micro-service has the potential to add value in ways and areas that were not possible before.

After considering these factors for the course of two years now I can state that Bitcoin is a greater money than gold in almost every sense. The only property that gold can claim over Bitcoin in my opinion is the ability to transact offline. This benefit is manifest in times of crisis where government overstep their bounds and people require a means of hiding and preserving their wealth.

However—Bitcoin is capable of being transacted with neither party being online! Once merchants have properly implemented SPV wallets then point-of-sale systems that accept Bitcoin can function in the same way that retail stores do when their internet connections go down. For example if a POS system goes offline today, they do not just close shop. They accept credit card transactions while offline and then send them to the bank in a batch once they regain connectivity.

While Bitcoin at scale will hold governments and its citizens more accountable thus reducing the need to smuggle gold across borders, in today’s world we are not there yet. I still believe gold still has a function as money in this regard as well as the alluded to protection against inflation.

Now that we have reviewed the functions of money and the most popular ones used today I truly perceive Bitcoin to be superior in almost every way.