Millions of players are engaged in online gaming such as shooters, MMORPGs and other gaming genres—many of them might sooner than later actually stop “playing“ online games and rather “work“ in these virtual worlds. Bitcoin SV’s unique ability to perform low cost micro transactions and its scalability allows online gaming to become a source of income for players.

A game is defined as a form of play, which can be described as any interaction between participants for fun. Playing a game means one does something not for the sake of earning, but for enjoyment. Until now, online gaming works by people engaging for pleasure and nothing else. Work on the other hand is defined as actions taken to get an income. So whenever people engage in online games for the purpose of earning money, it is not online gaming anymore, it is online work in a game like environment. With the use of Bitcoin SV, online games are able to morph into online work.

Online gaming and money are already connected in mainstream with eSports business, Let’s plays on YouTube and players streaming their gameplays live on Twitch. All these kinds of monetization of online gaming are inefficient though, and even exploitative. The players in eSports, Let’s plays and on Twitch are never paid directly for their talent and skill. eSports relies on revenues by sponsors and advertisement, Let’s plays and Twitch as business models mostly work on advertisement alone.

Advertisement and sponsoring can be understood as market distortions, because the players and viewers are not connected by money directly, but by third parties—the sponsors and advertisers. This is the case because there is no chance for professional online gamers to actually get paid in micro payments by their fans and followers. Third parties profit from this lack of micro payments and would suffer a tremendous decline of relevance as soon as micro payments in online games are enabled.

In eSports, players are engaged for cash and still have to trust a third party: the game developers and their mostly cloud based systems to compute all actions made in a trustworthy manner. This can be fair, but is still a trust based system without the chance to actually auditing the computations made behind the scenes. eSports players therefore depend on the sincerity of game creators. This dependency can be reduced by using Bitcoin SV for eSports and online gaming in general, as shown below in a second.

While eSports and Let’s plays/Twitch is only for very talented online gamers, Bitcoin SV will enable earning real money by engaging in online games even for amateurish players and simultaneously reduce market distortions caused by the advertisement and sponsoring industries. And this is where it gets exciting.

Signs of this new paradigm of online gaming could already be witnessed as early as the end of 2017, when the Ethereum based application “CryptoKitties“ was launched. In this game, players were able to buy, sell, collect and even breed virtual cats. The developers profited by a certain percentage of each transaction in ETH and some of the tradable virtual cats gained in serious price appreciation pretty fast. People were not actually playing this game, but were working in this game by making real money.

However, due to the lack of scalability in Ethereum, CryptoKitties caused a tremendous slowdown of the Ethereum blockchain and drove up transaction fees for all Ethereum users noticeably. This would not have happened if CryptoKitties was launched on Bitcoin SV though.

A more serious project of online gaming using blockchain is Kronoverse’s upcoming CryptoFights. In CryptoFights, players fight others in real time for cash. 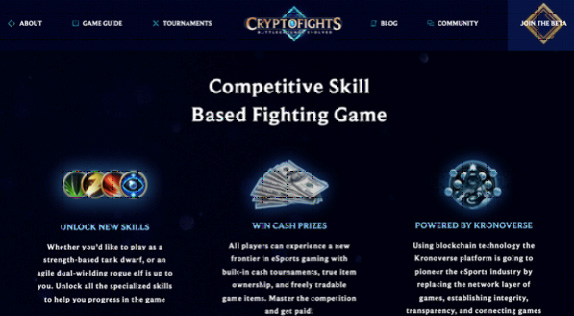 Based on Bitcoin SV, players do not have to trust the code behind CryptoFights, but make use of the transparency provided by the blockchain for every move in the game. There is no relying on any cloud service based computation made by the developers of the game anymore. Furthermore, the gameplay is not just transparent, but stored on the Bitcoin SV blockchain forever—game history being recorded while playing. This enables players and fans to actually review completed fights in the future without relying on video records of the match. In game items will also be tied to the blockchain, giving the opportunity to become real tradable digital assets of value in the future.

CryptoFights makes it possible for players to earn money by winning against others, which also means you are actually at risk of losing money by engaging in this game. It is not a game anymore, but a new form of work in an online game. Not only players who will work in this game, but also regulators and authorities will love the transparency and audit mechanisms of CryptoFights. Whenever players earn or lose money, tax authorities will easily be able to monitor or audit if necessary.

The closed beta of CryptoFights was available for Android users from December 16-19. Unlike CryptoKitties, which relied on the unscalable and therefore unstable Ethereum blockchain, CryptoFights is being exclusively built on Bitcoin SV, enjoying all scalability and stability of the Bitcoin SV blockchain. Kronoverse did not choose Bitcoin SV by accident, but for this very reason of being able to use a stable protocol that will not be altered or unusable in the future, making it possible for game developers to plan long term and invest resources accordingly.

CryptoFights is just the beginning. Players will leave their role as “time wasters“ or amateurs and step into a new kind of online work by engaging in Bitcoin SV based online games. This brings chance and risk at the same time, as players will be able to gain and lose money by participation. However, online games are easily accessible for billions of people and many of them are right now not able to make a decent income in the usual work space, so they might finally earn cash directly by playing online games. This is a paradigm shift and will boost Bitcoin SV’s relevance from now on.