Bitcoin software has been plagued by artificial limitations since day one. Inventor, Satoshi Nakamoto put some of these limits in place as a means to bootstrap the project, and suitably commented that such limits were temporary.

Core developers then, not only failed to remove such limitations, but in certain instances, made those limitations even worse.

Increasing the blocksize, which Bitcoin SV has been leading the charge in, is the removal of one restriction. There are many other areas however, in which Bitcoin and its ecosystem can benefit.

One of these limitations, is the length limit on an “OP_RETURN” function which is a function that doesn’t really do much other than store arbitrary data on the blockchain. Though, it doesn’t do much in terms of calculation, what it does do, is enable a swathe of applications to operate and interact – simply for this fact of data storage alone.

Earlier today, nChain’s Bitcoin SV developer, ‘Shadders’, posted a piece explaining how he, other developers, and miners, came together to agree to lift the op_return limits to 100KB. This was done without any hardfork, and without any need to wait for the next release.

You read that right.

This enables a single transaction to hold 100KB of arbitrary data! This is mind-blowingly useful for a whole number of applications, and the limit, it is anticipated will be lifted much higher than that in future. But for now, today, we can literally store entire webpages into a single transaction. In fact, we can store an entire website now on chain, with all linking done via transaction IDs per page. This example provides insight into the size capability that is now available today, and only on Bitcoin SV.

The trick for ‘Shadders’ and co, was the sudden realisation that this did not need a protocol upgrade, and that the parameter could be increased with miners simply agreeing on the limit. The understanding of this potential was not so straightforward however. It required a re-analysis of how OP_RETURN works in the greater scheme of things, and its consequences on what is valid and what is not. So, with a few discussions among miners, the eco-system is now equipped to handle the new limit.

In the past, in order to store long pieces of data, it literally required clever stringing of numerous transactions. Today, Bitcoin SV can store entire chunks of information in one transaction. The cost of this data storage is automatically incentivised by the bigger transaction size, requiring a bigger transaction fee.

The Bitcoin SV ecosystem has been abuzz ever since a couple of transactions earlier today, including this one appeared on the blockchain. The decoded transaction shows a rather long OP_RETURN payload, much bigger than anything possible before.

We can now build blogging platforms, on-chain (without trickery), or even extend Memo’s restrictive character limit and immediately allow for long-form posts. It’s already being tested and experimented with as developer @_Unwriter who just last week released six projects in seven days, published a “serverless website stored in a single Bitcoin push data.” The site can be seen here.

But more than just longer text, we are now afforded the ability to do very interesting linkings to other transactions.

Head of Tokenized (a token solution for BSV enabling smart and static contracts), James Belding, was over joyed with the surprise early enablement of this capability, and welcomed the move. For Tokenized, it means many more capabilities are now within reach. Belding stated “some of the things it enables for Tokenized right off the bat are; atomic swaps – on chain token for token exchanges, for example fiat token for ticket token, and multiple token senders and multiple token receivers per transaction. Principally, it can allow our Tokenized system to run with the same flexibility and capabilities as Bitcoin itself! …And this isn’t scratching the surface either. Our team is very encouraged by this development and believes this is a historic moment for Bitcoin. Bitcoin is now a general purpose ledger and that unleashes it’s true power.””.

This encouraging move has come while much other scalability work has been undergone at nChain with outstanding work from Daniel Connolly.

In a post on Bitcoin SV’s official website, Daniel made mention of how he and the team, managed sustained 64MB blocks over a full 24 hour period, on the latest build of Bitcoin SV. 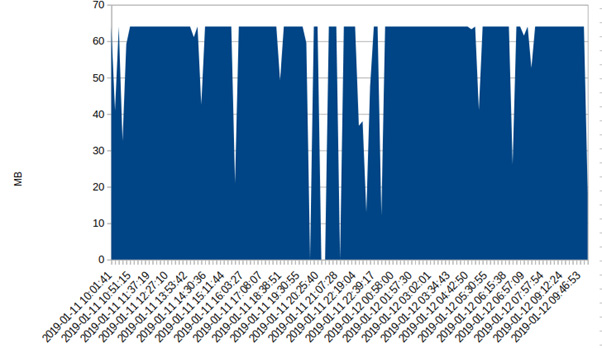 More interestingly, is that sustained 128MB blocks were also tested, and the team is well on the way to delivering this in the near future.

I will endeavour to cover more of Daniel’s work over the next week as there is some incredibly solid work going on in this area.

The developments that we have been witnessing recently very much prove that Bitcoin SV is indeed the leading chain for scalability. With scalability comes the immense power for utility, and this drives adoption. Bitcoin SV is an enterprise level, global blockchain that delivers a blockchain solution that is free from limitations and uncertainty.

Uncertainty arises from tinkering. If scale is there, and the platform is locked to stability, then businesses, and application developers will flock. Stability is key. Miners as businesses equally require stability because without stability, no business will want to transact on-chain, and without buy-in, miners are also lost.

Bitcoin SV miners recognise this very fact. And the unanimous decision to increase the op_return shows the maturity and business acumen required to grow.