Segwit proponents have been for weeks hailing the parabolic increase in Segwit transactions. Not long ago, almost 18% of all transactions were Segwit based. 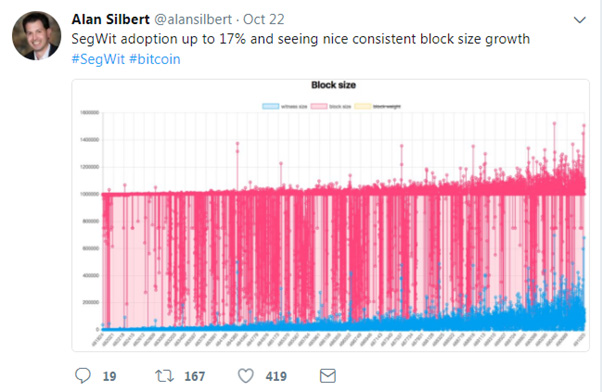 Well it has suddenly dropped back down towards 8%…  That is a frightening drop.  The parabolic rise has come to an end.

Reddit users on r/btc exploded into a frenzy of amusing and outlandish theories. But the most likely of all was theorised by user u/windsok who stated “Possibly a service was gradually converting a lot of UTXO’s to segwit addresses, and they have now completed that backlog.”

If a service was running and processing such a conversion in bulk, it would also explain how we managed to get an effective blocksize in certain instances reaching almost the maximum Segwit would enable in full capacity.

The nature of the soft-fork approach means that this will take a significantly long time before the conversion is ever complete.

Hard forks provide incentive for the eco-system to upgrade. If a minority chooses not to, they would have to create another coin. In some regards, Bitcoin (BCC) would have been the output of a Segwit hard fork in any case. Instead, Segwit now deals with a heap of technical debt, backward compatibility, AND a painstakingly slow migration…