The post originally appeared on Elas.Digital site and we republished with permission from its author, Brendan Lee.

A lot has been talked about regarding the use of so-called ‘Blockchain Technology’ for the management of goods as they pass-through logistics services as a means to provide transparency and traceability, sometimes with what are in my opinion quite outlandish claims regarding what can be achieved using the technology. All too often I see ‘blockchain’ being touted as a means to solve human problems however this cannot be, as only human action can solve human problems and adding blockchain to the mix without revising the incentive structures that create the behaviour will only put old problems in new wrappers.

What I wanted to explore in this post was a few ways that we can help these new incentives to be developed through the simplification of tracing mechanisms using Elas tokens to manage goods through a complicated delivery and checking service.

Consider a manufacturer of a consumer gadget. The gadget is manufactured in a factory using parts that are both made in-house and delivered from outside third parties. As the parts are either made or received, the manufacturer generates individual tokens that represent each item as Elas Satoshi tokens. Each token is given the part number and serial number of that particular element of the product to enable effective tracking through the QA process. We will assume for this example that the dust rules have been eliminated and that we can represent each token using 1 satoshi. 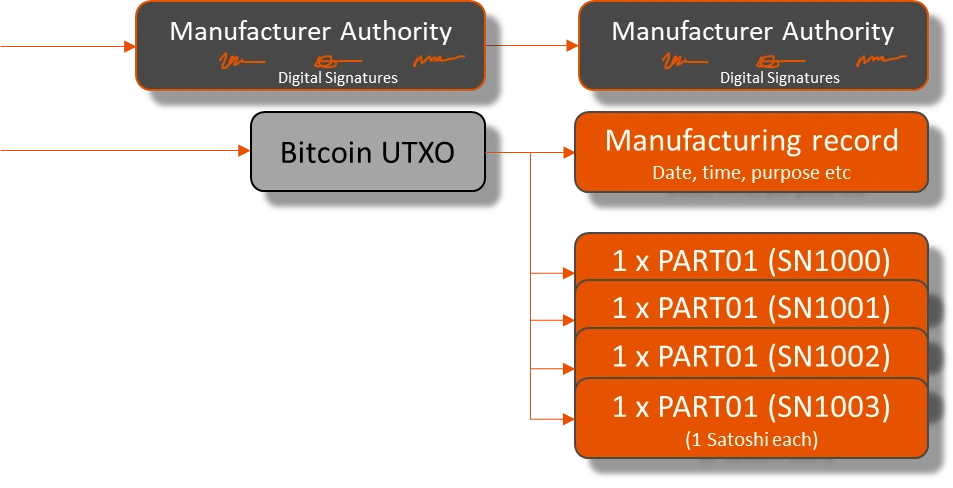 The manufacturer uses their authority token to mint the new parts into their Elas ledger.

As each part goes through the QA process, its token is passed from station to station, including any instances where re-work has to take place due to failed testing or quality processes.

These movements can be managed inside a payment channel, reducing the use of on-chain records, leaving only an abbreviated final account of the part’s journey through the factory if needed.

The next stage sees 4 separate parts integrated into the final widget which is tested and signed off by the integration station operators. The factory manufactures 24,000 widgets over 3 weeks for a major order to be shipped overseas. The widgets are packaged into cases of 100 items each. The widget tokens are kept intact, and an additional token is created as part of the packaging transaction by the packaging team. 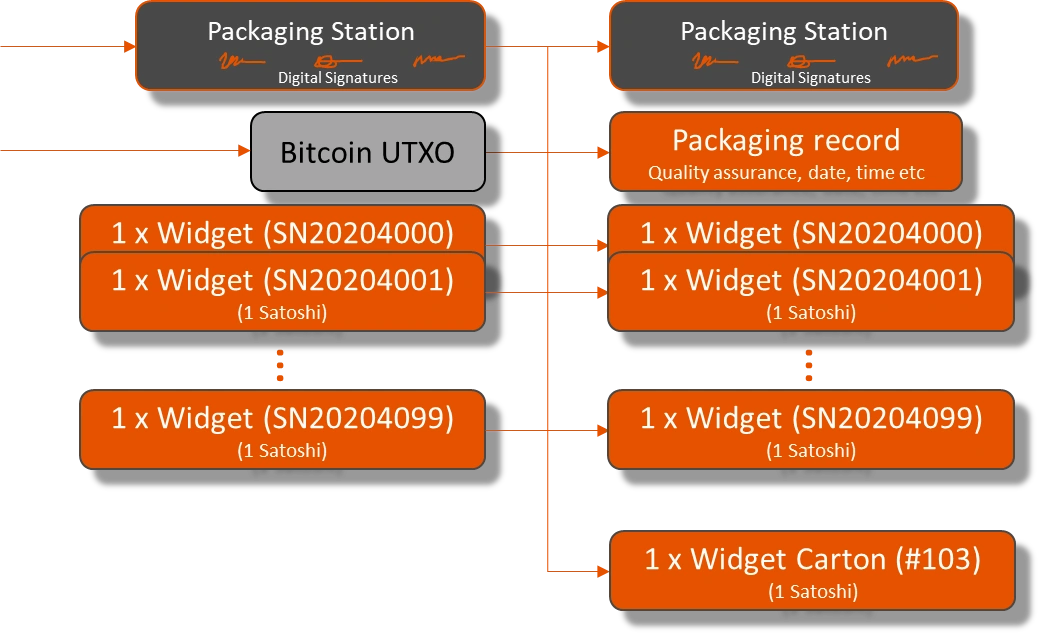 Now that the widgets are packaged into cartons, the cartons are palletised. This order requires 12 pallets, each with 20 cartons on-top. 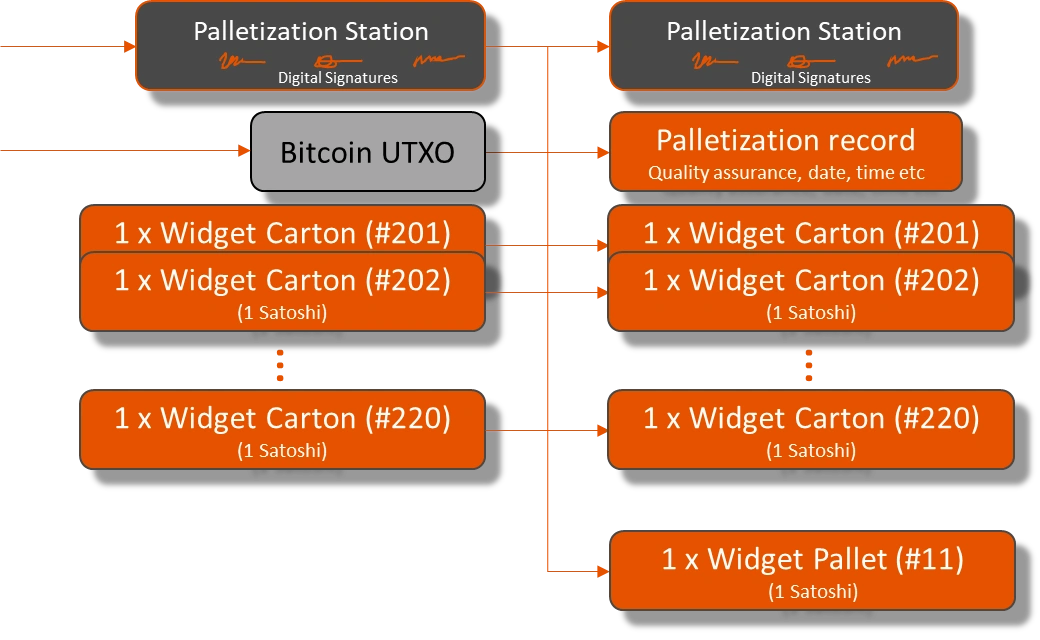 These pallets are shipped as a 12 item order via sea freight to the receiving company’s distribution center. The bill of lading and manifest are signed by the company’s shipping division prior to dispatch.

Subsequently, the pallets are moved into a script that is linked to the token of the shipping container into which they are loaded. The token already exists and its history is linked to the records of every shipment that the container has ever been used for. 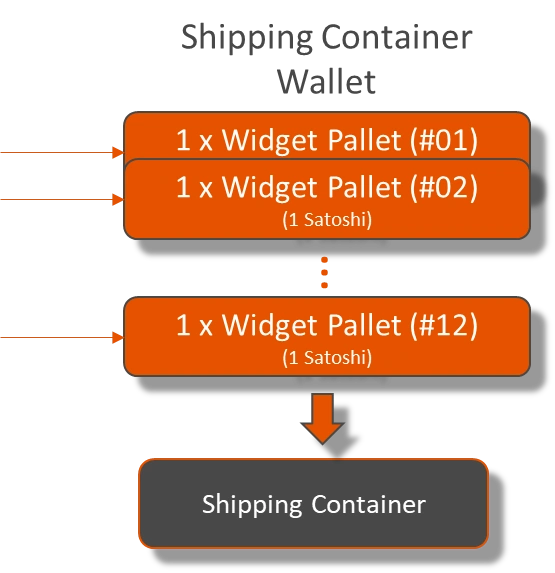 As the shipping container is loaded, it’s token is moved into a script similarly linked to the Boat’s own token which is controlled by the captain and crew of the vessel.

The container is transported across the ocean. The container ship’s own token is spent once an hour into a new UTXO holding a location marker allowing anyone with goods on the boat to very simply trace their exact location within a 60 minute window.

Because the widget manufacturer knows which container the pallets are in, and which ship the container was loaded into, it is simple for them to monitor the location of the ship ensuring that receivers can know to a high degree of certainty when their goods will arrive, or if the ship has to be diverted for any reason.

Once the ship arrives in-port, the container is unloaded and its token passed to the port.

The receiving company now separates the pallets and transports them to separate distribution centres where they enter the wholesale supply chain. The shipping system can similarly manage this distribution so it would be possible to see which transport, and even what route the items took in their journey. Once the pallets arrive at the distribution centres, the pallets are opened. At this moment, a knowledge proof which is sent from the manufacturer to the receiver can be used to spend the cartons into the wholesaler’s wallet, creating a record of receipt and triggering payment for the product and for the delivery.

The pallet token can be melted at this point, allowing the satoshi to be recycled. At this point, the receiver has acknowledge individual cartons are on-sold and distributed to retail locations. As the items are sold to consumers, each one includes a certificate including its serial number details and a knowledge proof which the customer uses to activate their warranty. The manufacturer uses their ledger authority certificate to change the widget’s tracking token into a warranty token.

The token script includes a public key which is spendable by the widget owner allowing it to be used to trigger service events, as well as a key controlled by the manufacturer allowing them to recycle the warranty token when the warranty expires.

This is just one example of how the Elas token and ledger system can be used to enable simplified UTXO based tracking of goods and services through a logistic process. In next week’s blog we will explore another interesting use case.