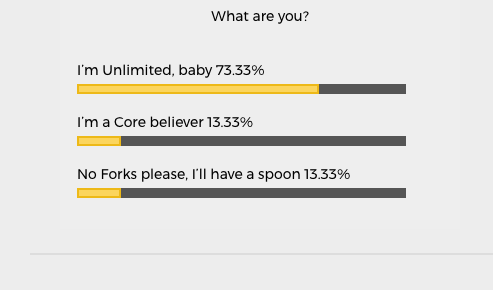 Followers of bitcoin have spoken: they want ‘Unlimited, baby’.

As we all know, the war has already begun over the future of bitcoin. One camp, Bitcoin Unlimited, is pressing to increase the current 1Mb block size to enable a more robust bitcoin environment. But the other camp, aka Bitcoin Core, insists that the blockchain’s original design must remain in its current form.

Experts and advocates have also started voicing their viewpoints on the future of bitcoin. For instance, bitcoin founder ‘Satoshi Nakamoto’ firmly believes in the ability of the cryptocurrency to scale upward to accommodate greater transaction volume. Bitcoin Core, on the other hand, has adopted a ‘defender of the faith’ stance and has demonstrated a willingness to stridently attack anyone who dares suggest otherwise.
But what do the followers of bitcoin think about the ongoing clash?

Since our official launch yesterday CoinGeek readers voted on our poll, asking which side they would pick, and the results showed that majority wants change. Which makes sense given that the whole ethos of Bitcoin is to change the way we make transactions.

Of the over 500 votes cast, 72.73 percent were for the “I’m Unlimited, baby” side, while 13.64 percent of the votes went to “I’m a Core believer” camp. The side “No Forks please. I’ll have a spoon” also received 13.64 percent of the readers’ votes. These voters are against a civil war which is also easy to understand – is this just damaging to Bitcoin?

Bitcoin Core, being backed by the existing establishment is its apparent advantage, although it goes against the philosophy behind the cryptocurrency, which has been conceptualized to become an alternative to traditional banks. If Bitcoin Core truly is funded by the Banks, the ‘Core’ team might not even be aware that the fragmentation they are causing is as helpful to their paymasters as anything.

Unlimited, on the other hand, is closer to the original bitcoin’s ideology—a decentralized digital currency. But, of course, moving out from the comforting arms of the banks is a big step, especially for those who don’t like change. But that’s what you have voted for and we ain’t afraid of change, are we!?