The entire contents of their BTC wallet were stolen.

NiceHash, an online platform launched in 2014 that connects cryptocurrency miners with users willing to “rent out” their idle computing power, has released a statement saying they have been hacked. They are freezing operations for 24 hours while an investigation is under way, the release said. 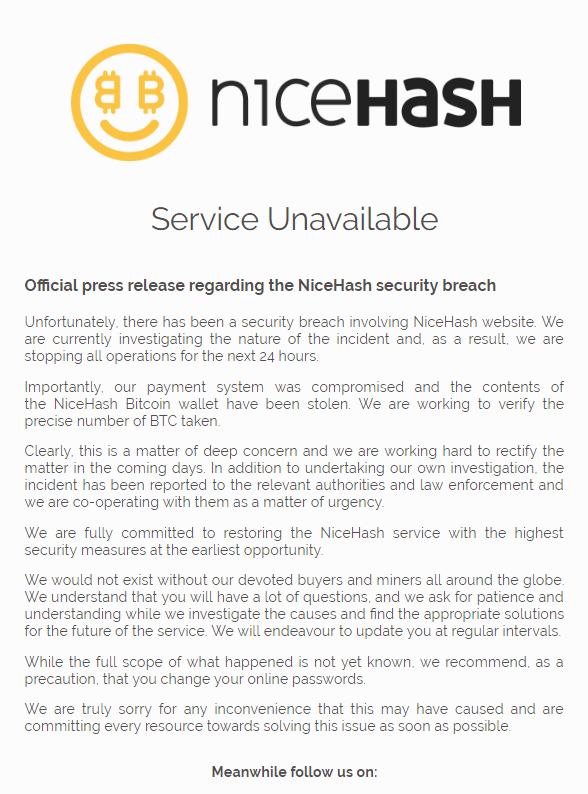 The crypto-mining marketplace initially said the service halt was due to maintenance, but later on released the statement saying there has been a “security breach,” much to the frustration of its users.

Although the release said they are verifying the exact amount of damage, NiceHash users have traced an address holding the BTC balance that was supposedly siphoned out from NiceHash’s account. The account has 4,736.42 BTC, which amounts to over $72 million at current BTC-USD exchange rates. It is not yet clear how massive the theft is, and how many users are affected.

The company urged users to immediately change their passwords as a precaution while they are still assessing the gravity of the situation. And much like similar incidents, users have taken to Reddit forums armed with conspiracy theories, with rumours of exit scams, inside jobs, or a possible mess up by the team causing the problem. Just last month, rumours of a conspiracy between Bitfinex and Tether surfaced after the latter was allegedly hacked. The lack of transparency and updates from the organization did not sit well with users.

NiceHash assures the public, however, that they are solving the problem and will be giving regular updates.

“We would not exist without our devoted buyers and miners all around the globe. We understand that you will have a lot of questions, and we ask for patience and understanding while we investigate the causes and find the appropriate solutions for the future of the service. We will endeavour to update you at regular intervals.”

The prosecutors raided the Bithumb's offices to gather evidence on the allegations of price manipulations relating to local tokens Pixel Coin and GoMoney2.