Home » Business » It’s all decentralized until someone gets rekt

Many blockchains and digital currencies assert to be “decentralized,” meaning without any one group or entity that can control it. However, its short history has proven this to be demonstrably false, as several incidents have occurred in the past six years proving so.

In 2016, a so-called decentralized autonomous organization (DAO) holding nearly 15% of circulating Ether was hacked. After much debate, Ethereum’s founder Vitalik Buterin essentially rolled back the blockchain, undoing the hack, bailing himself and his cronies out akin to how the banks were bailed out as a consequence of the 2008 financial crises. No judge, jury or court was involved, the leaders just reversed the transaction, returning the funds to themselves. The split was so contentious that the permanent result was two blockchains, Ethereum and Ethereum Classic, the latter which persisted the hack in the ledger.

How is this decentralized finance?

Less than one year after the Ethereum network went live, the founders already engage in the same practices the government and central banks did that were a factor in spurning Bitcoin in the first place.

If a group of people can arbitrarily re-assign funds for subjective interests, then such a system is worse than we have today given the lack of due process, scrutiny, and accountability.

In May 2018, Binance, a top digital currency exchange suffered a hack, losing 7,000 BTC ($40 million at the time). CEO Changpeng Zhao wasted no time in considering rewriting the BTC chain to get his companies’ funds back. He quickly reversed after being talked off the ledge by the community, perhaps recalling that the blockchain was supposed to be “decentralized.”

“Ethereum killer” Solana has had several instances of downtime over the past year, including a 17-hour outage in September 2021. The outages are caused by high transaction volume, but who is deciding to halt, fix and then restart the network? Is it “decentralized” if transactions cannot be executed?

The validator community can opt to restart the network and/or install a code patch to fix the issue at the instruction of the Solana Foundation. Once 66% of the validators agree, the network can come back online.

Compared to Bitcoin for example, if a single node goes offline then another is not necessarily affected and has an incentive to process the transactions that the other could not, earning revenue. Why is this not possible with Solana?

In Early May 2022, “stablecoin” UST lost its $1 target price and collapsed to 12 cents. Its backing token, Luna suffered a greater than 99% loss in just a week. In efforts to recover the situation, Terraform Labs founder Do Kwon initially proposed an increase in the supply of LUNA and a decrease in the staking reward—which is exactly what the Federal Reserve has been doing for the last 14 years.

Afterwards, the circulating supply was increased to 6.9 trillion in just a few days, and subsequently shut down its own blockchain.

We have four instances among top digital currencies that assert to be “decentralized” ecosystems but when the leaders of these alleged leaderless blockchains are pushed against the wall, we find that decision making will be centralized. These leaders will step up and take control of the situation, making top-down decisions “for the greater good.” 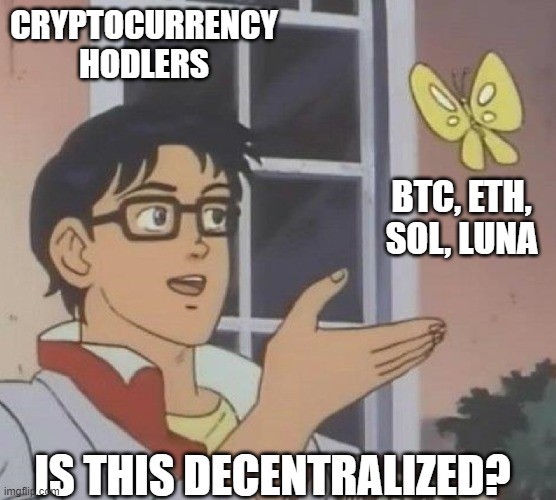 Bank for International Settlements found that payment system efficiency is the key motivator, but unlike other regions, African central banks see CBDCs as a great tool for monetary policy.