The best way to convince people of Bitcoin’s abilities is to use it yourself. The Bitcoin Association understands this, and has added live demo apps to the BitcoinSV.com website for new users to try for themselves.

The Association promises that users will get a taste for how simple it is to create tokens on, and add simple data to, the BSV blockchain. More importantly, demo users will discover how affordable and efficient it is.

We've expanded our website for #developers with a #demo section that illustrates #BSV as the most #efficient and #affordable #blockchain for minting #NFTs and publishing immutable data to chain.

Experience the true value of #BitcoinSV for yourself: https://t.co/9PAFJi7sm6 pic.twitter.com/c5FoTI4NIa

It’s almost too easy—but that’s the elegance of BSV. Anyone can write any kind of data to the blockchain, and in any volume. That data is timestamped, immutable, and therefore auditable forever. Whether it’s an artist creating NFT art collections, games recording item ownership and player moves, governments or academic institutions keeping records, or concert organizers creating tickets with benefit tiers, BSV can handle all of it.

You soon understand that writing data to the BSV blockchain is (and should be) as simple as uploading information to the internet. Unlike the internet, though, the data you add is officially and legally yours—it can’t be tampered with or deleted, and you can prove it.

I tested the demos myself and they are indeed simple to use. For starters, the NFT creator lets you choose from a selection of default images, give the series a name and description, and define how many there should be. I created three tokens, choosing the Ape picture (they seem to be lucky in the NFT world), hit “create” and my NFT series appeared instantly.

The demo gives a link to the relevant data on-chain, showing that three STAS tokens were created. Even though it’s a demo, these are real tokens and will live forever on the BSV blockchain. Notably, doing all this cost a whopping U.S.$0.000198—which the Bitcoin Association is presumably happy to cover. I also felt a sudden urge to create more token series, using original artwork, just because I could. 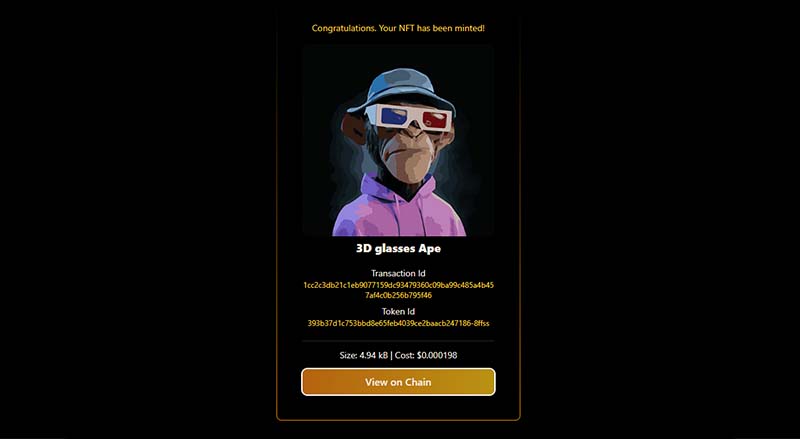 The “write data to chain” demo is perhaps a little less exciting, since it’s a simple property-ownership record and all the details are already filled out. All the user has to do is press a button to broadcast it to the network. Again, it took less than a second and the blockchain explorer link showed it was written there, immutably, for a cost of $0.000016. 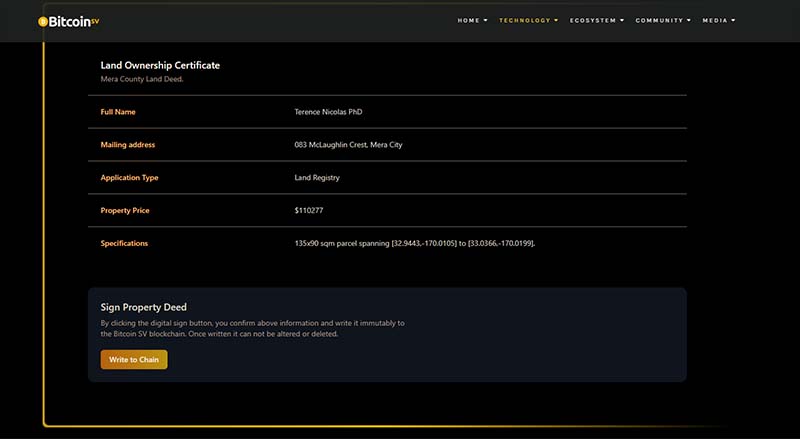 The demos themselves might be a bit underwhelming for those already familiar with Bitcoin. But I did get that small twinge of nostalgia for my first-ever Bitcoin transaction a decade ago, that moment when I saw the numbers change on my phone and said “wow!” The demos are obviously trying to re-create that feeling, but without that early-2010s need to find a local Bitcoin meetup and pay money to a total stranger to get it.

The BitcoinSV.com website acknowledges the demos are aimed at newcomers and users from other blockchains, and it includes a “What do I do next?” section with links to real-world apps running on BSV, and to developer guides. There’s also an invitation to join the BSV Discord group to add your own feedback and suggestions.

Demonstrating BSV, rather than just talking about how great it is, is a far better way to win over new users. For those who’ve used other blockchains, the wow factor will be BSV’s usage costs… or lack thereof. Even as a years’ long BTC user, that moment of realization came again the first time I sent a BSV payment, and noticed it cost less than a cent to do so. That’s something that will appeal to casual users and large data-heavy enterprises alike.