There’s always been a little bit of magic in the Bitcoin economy! The same week Satoshi Nakamoto told the world that a Bitcoin alchemist could turn coins from gold to lead, to gold again a mysterious bug made it necessary to wave his magic wand and hard fork Bitcoin in 2013. The double-spend of $21 at 21:21 UTC in the 21st year of the 21st century reported all over the world on the 21st of January was a also a juicy one! How about the fact that sometimes magic numbers with lots of leading zeros just simply emerge as Bitcoin hashes and force everyone to rethink the importance of e8 Lie Theory!

If you’re willing to look past all the investment hype, Twitter noise and ignore all of the professional concern-trolls that dominate the space, you will start to notice patterns and symbols that are truly meaningful—as if maybe it is all planned from the start. And maybe not just the start of Bitcoin, but maybe emergent phenomena going back to the beginning of time itself.

Really though! Ignore the concern trolls!

On April 14, 2021, amid the most aggressive bull market since 2017, coin prices were surging, and people were getting rich beyond their wildest dreams.

The stars aligned to wink collectively at the exuberant crypto commune. While newcomers were buying DOGE and BTC fees once again hit $40 per transaction, MasterCard’s vanguard brand in the blockchain economy—Coinbase—fulfilled Silicon Valley’s vision for BTC by selling shares in an exit scam—I mean IPO… I mean… a “direct public offering” of its stock. 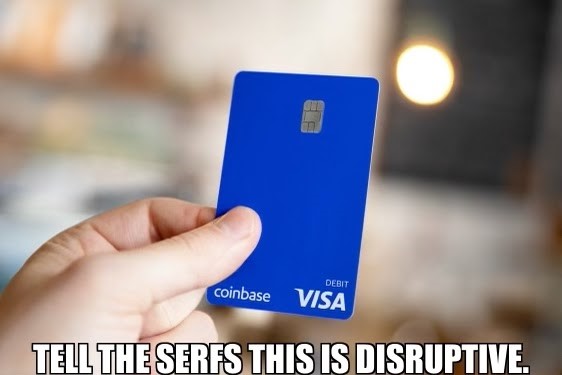 Coinbase insiders sold a portion of their company to people who thought that bitcoin always just really needed a bank in San Francisco to help it be successful. No need for micropayments, or in some cases any payments at all. Nobody told them that Satoshi Nakamoto wanted to disrupt the high fees associated with “commerce on the internet” according to his own founding document. Coinbase’s puppet masters successfully whitewashed that history, and switched out global economic disruption with off-chain IOUs and Ponzi scheme structure wrapped in tidy marketing slogans and debit cards.

Curiously, some executives at Coinbase sold 100% of their holdings in the company on opening day to signal maybe there just isn’t that much to be excited about at the formerly “Bitcoin only” company that now sells dozens of copy/paste tokens to newcomers.

That’s right, the same day as the Coinbase offering, the most legendary Ponzi schemer of all time gave up the ghost and passed the torch to “the crypto economy” to make promises it can’t keep to unsuspecting investors! Madoff was a fascinating character in the history of investment.

Bernie Madoff died the same day as the Coinbase IPO.

Most notably, he leveraged his long reputation in the Jewish community to steal money from Jewish charities—brazenly gathering money from among his own community, and in some circumstances relatives and trusted business associates. He also leveraged himself into regulatory positions of power in the investment industry and was very active in industry “community” organizations such as National Association of Securities Dealers (NASD) and Securities Industry and Financial Markets Association (SIFMA) so that he could actively steer regulators and industry insiders away from the bubble that he was growing and using to continually rob his ignorant clientele.

Ultimately, Madoff was turned in by his own children who were shocked to learn what their father had wrought—often passionately—on the people who trusted him the most; using his pristine reputation to destroy the lives of a great many people.

We all meet our maker someday, and for Madoff, that was April 14, 2021, as a new generation of unwitting speculators sent their dollars to buy Coinbase stock and BTC in a fury.

Three exciting things on the 14th

Unfortunately for investors, the timing couldn’t have been worse! April 14 was the very top of the market, and whether it returns remains to be seen as BTC has taken a dive over 50% since the peak, and that was in just about a month! There is a relief rally forming, but the market is still down about 40% at press time from the hype of the day Coinbase and Madoff had a date with fate.

People think I say this too much, but I wasn’t far off!

Maybe we should all take these signs as an opportunity to take a step back and realize that while clever investments are fun, it’s important to keep an eye on fundamentals, manage portfolios conservatively, and always preserve buying power. That way, when the next rug pull arrives in the market (and I think a big one is still coming in the blockchain space), we can minimize the damage! The universe might be warning us that a big change is coming… soon™