This week, I read with excitement that you have a goal to make Britain a global hub for digital currency assets. I congratulate you on your foresight and willingness to take a risk in favor of innovation. I truly believe the U.K. has the talent and drive to become one of this new industry’s leading nations.

However, if we’re going to build a global hub for something, then, in my view, we need to build it on a rock-solid foundation of facts. In this open letter, I intend to share my view on Bitcoin and ‘crypto-assets’ as you call them. Please do read on and consider what I’ve said herein.

Let me begin first with some Bitcoin fundamentals. There’s so much misunderstanding about what Bitcoin is, and I regret to say that even governments worldwide do not fully understand it. Some are blatantly wrong about it. This gives the U.K. a fantastic opportunity to be one of the first to grasp Bitcoin’s true potential and get the legislation and other factors correct while other nations play catchup.

Bitcoin is a peer-to-peer digital cash system. It is not digital gold or a hedge against inflation as it is often marketed. Who am I to say that the vast majority of the market has this wrong? Never mind me, Chancellor, read the Bitcoin white paper written by Satoshi Nakamoto himself to find out why. 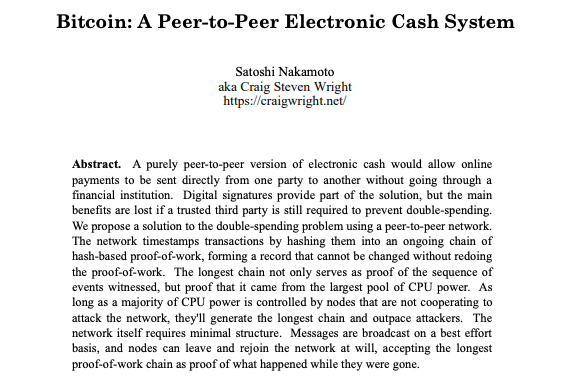 Bitcoin, as you probably know it today, is not Bitcoin at all. The Bitcoin implementation known as BTC is a deviation from the original protocol. There are active lawsuits going on to settle all of this, and I believe that we’ll be miles ahead of the competition by positioning ourselves correctly for when the inevitable happens. Figuring out early what Bitcoin is and driving our home-grown industry in that direction will be hugely important if we’re to be a global leader. Thankfully, many people in the U.K. already understand this, including Bitcoin’s inventor, Dr. Craig Wright, who lives in Surrey.

Now, with Bitcoin’s nature out of the way, let’s move on to the next important thing.

We need to get the legislation correct to foster innovation

Chancellor, treating Bitcoin as a ‘crypto-asset’ is a mistake.

This language paints an inaccurate picture of what it is in the minds of the British public, some of whom may be drawn to ‘invest’ in it because it’s some sort of asset that will inevitably appreciate. Instead, we need to start referring to Bitcoin as a digital currency or electronic currency, and we need our legislation to reflect that.

If the U.K. is really going to be a hub for innovation in this industry, then entrepreneurs, business people, and innovators need legislation that helps them do what they do. One of the best things the government could do is regulate Bitcoin as a currency so that people can buy, sell, and spend it without worrying about capital gains taxes.

While I understand you might find such taxes attractive at the treasury, I firmly believe that the taxes generated by real businesses using Bitcoin as an electronic cash system would be far greater in the long run. Bitcoin is relatively tiny as a speculative asset, but as a global peer-to-peer cash system capable of billions of daily transactions, it can be much larger. Just imagine the unicorns that could come out of Britain in the years ahead if innovators are free to use Bitcoin for its true purpose without worrying that they’ll have to account for taxes every time they send a transaction.

As well as this, we need to show the world that Bitcoin can comply with all Anti-Money Laundering and Know Your Customer regulations, and that it can be done in such a way that isn’t overbearing and burdensome. The U.K. has a track record here; just look at our world-leading iGaming industry. It managed to find the right balance between innovation and legal compliance, and I believe we can do the same again for Bitcoin and blockchain technology.

This leads me nicely to the next point…

Remember how I said that Bitcoin isn’t a speculative ‘crypto-asset’ but is a peer-to-peer digital cash system? That’s important because by fully understanding it, it’s possible to begin to imagine how Bitcoin might change the world in positive ways. I’ve made a list of ways I think it can improve the U.K.

I’m sure you don’t need me to tell you that one of Britain’s greatest strengths is its legal system. Investors from around the world invest here with confidence because they know they’ll be treated fairly and that if a dispute occurs, the British legal system will rule by the letter of the law.

What if that was enhanced even further by virtue of being able to seriously reduce financial fraud in this country? While everyone focuses on the coin in Bitcoin, the real innovation is the ledger itself. Allow me to explain.

Contrary to being a shadowy crypto currency like BTC which can be used to buy drugs and contraband on the darknet, the Bitcoin blockchain is an open book. Every transaction from the Genesis block until the very second you read this is traceable on the blockchain, and with a few well-crafted regulations, we can make it so that wallets with large balances or transaction histories are linked to identity. Imagine the treasury being able to verify the position of a publicly-traded company instantly or audit it at tax time without having to request endless documents. Imagine being able to track, trace, and recover funds linked to illicit transactions. This would make fraud difficult, if not impossible, enhancing Britain’s brand as somewhere to do business safely and legally.

Did you know that the average fee to transact on Bitcoin is £0.0001 ($0.00013) or less? Combined with its ‘open book’ ledger and the efficiencies it unlocks, these cost savings could give British businesses a huge advantage on the global stage. I’m sure that the treasury understands how small amounts add up or how saving businesses £0.30 ($0.39) or more on every payment could unlock lots of extra profit and give them a competitive advantage.

Yet, the efficiency Bitcoin can bring about extends far beyond just business. As a Conservative, you know all about the inefficiency of many government departments and the need to streamline them. Bitcoin can also help with that. Imagine a world in which you can collect all of the financial information you need about a company from the public blockchain without the time-consuming process of contacting the firm, asking their auditors to compile documents, and then waiting for your people to work through them. Or how about a world in which you can see exactly what NHS trusts are spending and where the cash is going in real-time? Imagine how these more efficient ways of doing things could add up and multiply across the entire economy and every department, making Britain more transparent and efficient.

While some of these ideas may not be suitable for some departments (e.g. defense), the idea remains the same: Bitcoin is a ledger that can transform the way everything is done and make it more efficient. It can eliminate wasteful and time-consuming processes, cut unnecessary costs, and streamline processes for virtually any department or business that uses databases, makes payments, or keeps records of any kind.

Bitcoin has the potential to transform the way taxes are collected in Britain. As a self-employed person, I understand that the current way we do things is less than perfect. However, with Bitcoin, things can change for the better. For example, what if the government could collect VAT in real-time on every purchase made using credit cards, debit cards, or bank transfers? The BSV blockchain implementation of Bitcoin has already shown how payments can be affordably split into micropayments, so it’s as easy as directing 20% of each payment into a wallet controlled by the treasury at the point of sale. Of course, this would all be in GBP and not in Bitcoin which would simply act as the plumbing, but the point is that the technology is here now, and it works today.

As well as streamlining things like VAT collection, Bitcoin could be used to build new industries that make use of micropayments. This has never been possible at scale before. Paying pennies to read articles online, replacing the ad-based model the web runs on, building new payments companies to take out the incumbents, building software to help trading firms and banks track their finances, and much more are possible with this technology. The U.K. can lead the way and be years ahead of other countries if we understand what Bitcoin is before other countries figure it out and if our laws reflect that understanding.

Chancellor, I know this letter has gone on a bit, but I’m passionate about Bitcoin, and when I get going, I find it difficult to stop. The main point I want to impress here is simple; Bitcoin is not what most people think it is. It’s not only an asset to be traded. It’s so much more than that. The BSV blockchain can change everything just like the internet did, and the U.K. has a unique opportunity to be at the tip of the spear.

However, before we invest billions and make a huge effort to lead the world, I implore you to fully understand Bitcoin as a peer-to-peer cash system and its implications. I suggest the best way to do that would be to speak with Satoshi Nakamoto himself. Since he lives in London and has offices there for his company nChain, it shouldn’t be too much trouble.

Thank you for giving the industry a chance and for recognizing that the U.K. has a golden opportunity in front of us. I’m sure that, looking back, many will view this as the correct decision.