The Fronks project was a generative NFT project that launched in April 2022 and seemingly went dark for a couple of months. Their Twitter account just teased a platformer game where owners can use their Fronk as the character.

With NFT sales declining rapidly overall in 2022, the market needs another dimension to stimulate demand. The so-called JPEG NFT appears to be dying out in favor of one that actually add value for example exclusive access. If JPEG NFTs exist that also have utility, then what is the point of solely JPEG NFTs?

This concept is similar to the trading card game (TCG) market where all cards have utility in some game, one dimension of that market is the collectible aspect. Some buyers like the art on the card, the nostalgia factor, or are simply speculating on the future price of the card. Where utility exists, a floor price is set. Such dynamics are non-existent in the current digital currency space where many NFTs value are derived from Greater Fool Theory. Without speculative value, these NFTs suddenly become worthless.

Haste Arcade recently launch Game Collectibles which are essentially DLC (Downloadable Content) for the original games developed by the company. The current set of collectibles are different skins for the ship you control in Lost or the ball in Jump. 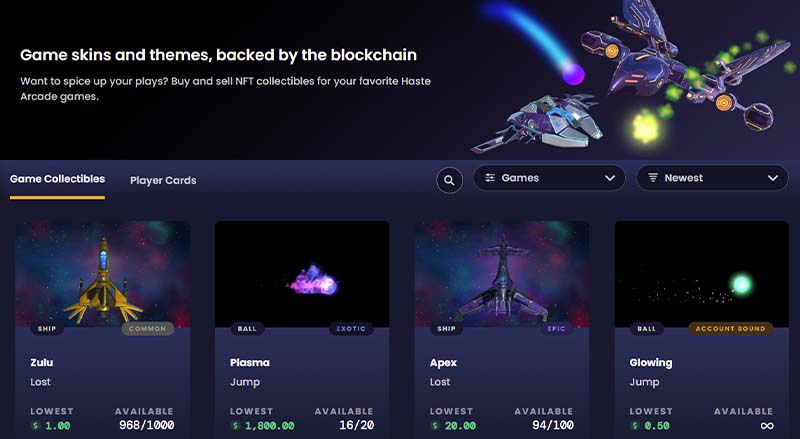 Another game which placed third in the Haste Game-On Competition, Quack and Field allows players to bring the baby duck they raised with varying stats (swimming speed, running speed) that affect gameplay. This concept is not new in the video game industry, however what is new is the trading aspect. In this case the ability to speculate and trade is the secondary benefit, not the primary. Regardless of the price of these collectibles, they can always be used in the arcade games and serve as an immutable record of ownership. Such factors are a contrast to the speculation that drives the current NFT markets. Furthermore, as these DLC NFTs are truly owned by the purchasers, they will live on the blockchain even if the gaming platform were to go down.

This is notable given the news that Nintendo is shutting down their 3DS eShop later in March 2023. While existing players will still have the DLC they previously purchased on their devices, no means exist for new players to purchase digital 3DS games or DLC. If the DLC were truly owned by the players, then Nintendo could shut down their eShop without worry, as new players would always be able to purchase old DLC on the secondary market. Additionally, old players would be able to recoup some costs of the DLC or potentially make a profit.

The gaming communities have pushed back on the concept of morphing DLC into NFTs, but this fear is likely based on the current market dynamics where pure speculation drives the NFTs to absurd prices. In the model discussed above, the DLC NFTs would trend towards the true market price. In many cases, the secondary market could have cheaper prices, which many gamers would welcome.

As the digital currency space is forced to mature given low asset prices, true value will need to be added to justify NFT purchases moving forward. Many scams will die out and only the valuable will remain. With new dimensions added to old markets, the resulting creativity will be interesting to see.

The cases include an NFT rug pull, a fraudulent investment fund, an unregistered digital currency security Ponzi scheme, and a fraudulent ICO.

Just as things seemed to be settling down in the digital currency space, Vauld, a lender backed by Coinbase, has suspended withdrawals and hired advisors to explore restructuring.

Bryan Daugherty and Energy News Beat's Turley explores how blockchain solves the greenwashing problem in the ESG world, the value of blockchain technology, and more.

To celebrate his 2,000 subscribers on his YouTube channel, Joshua Henslee did a three-part "Ask Me Anything" episode where he answered questions about Bitcoin, digital currencies, and blockchain.