On June 18, the blockchain analytics firm Chainalysis released a report that took a look at how BTC is being used. Among a number of their findings, Chainalysis discovered that BTC is practically useless and that 60% of BTC in circulation is held by individuals who have never sold more than 25% of the BTC they received.

In other words, a majority of BTC owners are not using BTC, and as a result, there is little to no value being added to the BTC blockchain, other than through speculation and trading. Here are a few key findings from the Chainalysis report:

What is BTC used for? 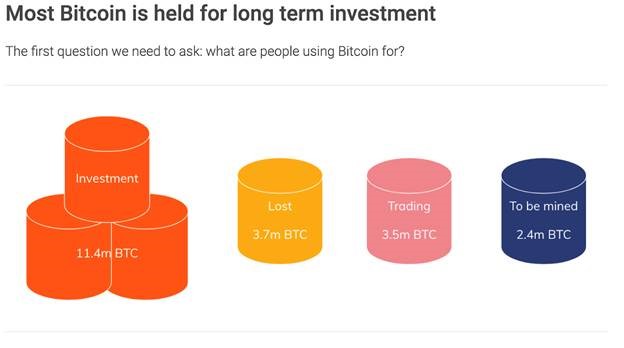 Retail investors are swimming with sharks when they speculate on BTC. Although many BTC owners believe that the price of BTC will continually rise without them adding any value to the chain, they are really at the whim of professional traders when it comes to how to market values BTC.

Is security a myth?

Interestingly, regardless of the “not your keys, not your coins” meme that you often see on Twitter, A majority of BTC in circulation is held on digital currency exchanges and custody services.

According to Chainalysis, about 60% of the BTC in circulation is held by a licensed custodial service. In other words, a majority of BTC owners don’t actually possess their own private keys.

When you own BTC, you are merely speculating on the future price of BTC—no value is actually being added or created on the BTC blockchain that justifies a price increase. In addition, professional traders dictate what they want the BTC price to be by controlling over 85% of the capital that is exchanged in the digital currency markets. Ultimately, investing BTC is no different than gambling at a casino, because whatever happens next will always be out of your hands and up to chance—at least as a retail investor it will be.