OK, so what’s going on with the BCH price this past year? Most digital asset prices have risen lately — particularly Bitcoin (BSV) in the lead up to, and following the Genesis activation. Yet BCH, which hasn’t seen any big improvement or change to its protocol in recent times, has moved in similar patterns to BSV. How much are cryptocurrency prices guided by manipulation rather than real market forces, and does it matter?

Take a look at these charts, showing the prices of BSV and BCH since the November 2018 hard fork that separated them. They are quite similar, showing a fairly even spread between the two over a long period of time with an average historical spread of $142 of BCH above BSV with significant volatility reflecting their relative prices. 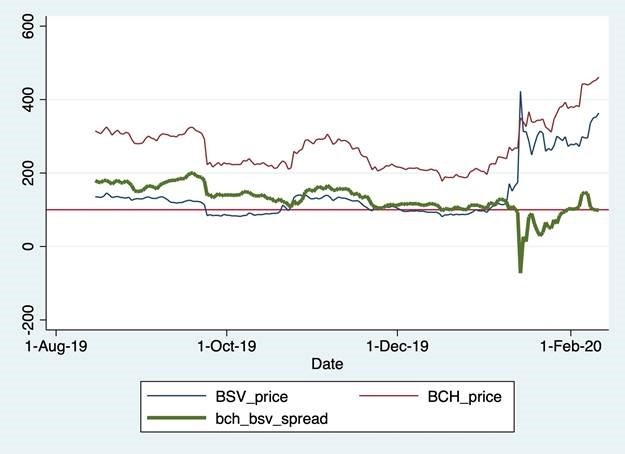 There are a few possible explanations for this. One is that BSV and BCH forked from the same chain, meaning if you held 100 coins at the time of the fork, you had 100 BSV and 100 BCH after it. While proponents of their preferred version issued loud, public signals they’d dumped or acquired either BSV or BCH, many traders were likely more pragmatic and held onto both stashes. They could possibly be trading both at the same time.

That doesn’t explain the almost-exact matches in movement over a year, though. If traders were holding both coins in equal amounts just to be pragmatic, we’d surely have seen more divergence at some point.

It’s possible that a large holder, or group of BCH holders either large or small, is using trading algorithms programmed to “shadow” the price of BSV—buying big when it rises, and selling off when it falls. Such algorithms, or retail “trading bots” (for example ProfitTrailer) are available at a reasonable price to ordinary consumers. Just search “trading bots” on Google and you’ll see a selection.

Dr. Amos Nadler is the Chief Economist of Bayesian Labs and studies the technical, behavioral, and institutional factors that affect cryptocurrency prices. He describes how price levels can be manipulated with market making algorithms that are programmed not only to reduce the distance between bids and ask prices (“spread”) but can also artificially support a particular price, including a price level above another cryptocurrency’s trading price. He adds that “this distorts people’s ability to discover the true price of an asset and is counterproductive to building a trustworthy ecosystem.”

The next question is: Why? Well, many would have an interest in keeping the BCH price constantly higher than BSV to avoid a “flippening” (where BSV overtakes BCH). Such a flippening happened for a very brief moment in January, before the spread “corrected” back to where it was before. Since then, BCH has stayed comfortably above BSV, even though BSV just underwent a major upgrade.

why is it that BCH is trading nearly exactly 100 above BSV for the last week. Its looks like they are just manipulating the BCH market with a bot to always be 100 up. So weird and so corrupt.

Wait, so isn’t it possible BSV traders are themselves manipulating the market by mirroring BCH? While that’s possible, it’s more likely that manipulative traders would want their preferred coin to remain higher. If BSV backers could manipulate the markets as much as social media pundits would like to imagine, they’d probably manipulate them higher than BCH, not consistently lower.

“Prices of equities are often managed in order to be more appealing to retail investors and avoid exchange problems,” Dr. Nadler explains. “Some firms purposely split their stock down to levels that make them attractive to investors, while others reverse-split to avoid being delisted. Both of these practices have no effect on the fundamental value of each share of stock and is acceptable practice. However, managing cryptocurrency prices in relation to others to appear higher seems to have other objectives, such as simply being above another in the market capitalization rankings.”

It’s difficult to prove anything in cryptocurrency markets and the trading platforms themselves are notoriously opaque. Most digital assets (not including tokens such as ERC20-derived assets) have not yet been legally defined as securities, and exchanges have not (again, yet) been subject to the same regulatory scrutiny as international stock markets. And in any case, using trading algorithms is not itself illegal—the majority of trades on most stock markets are algo-driven these days.

Since BSV’s dramatic price rise in January of this year, there appears to be a markedly consistent spread of approximately $100 between BCH and BSV, suggestive of deliberate price targeting in reference to BSV (see graph below of past 30 days with reference line added at $100 spread). 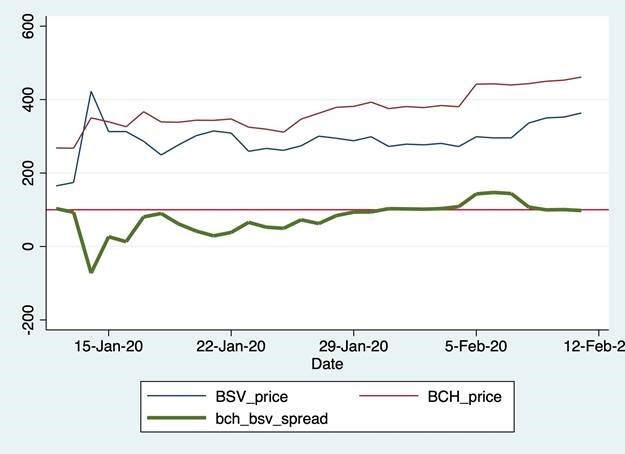 It’s more a matter of who

Cryptocurrency markets are not as liquid as proponents would like the public to think. Some of the more obscure tokens are listed only on a few equally-obscure platforms, leading to gains or drops of hundreds of percentage points in a single day. Even the large market cap cryptocurrencies’ prices can be driven by small handfuls of large “whale” holders.

The news media will always search for easily-understandable reasons behind big rises and falls—government/regulatory actions and announcements, a development problem or hack, or the general public suddenly deciding (for some random reason) that now’s the time to adopt cryptocurrency in daily life. Yet even those watching markets closely will often admit they can’t explain why a large movement happened at the time it did. Coins will suddenly spike or dump even if very little is happening in the news.

It’s highly likely whale traders gathered in exclusive, invite only chatrooms, and decided to act together. Why not? If groups of countries will collude to crash or raise the price of a certain commodity for geo-political reasons (just look oil per barrel) then it can happen on any market. Whether it’s legal or not scarcely matters. Perhaps trying to use logic and reason to explain price moves is a mistake—which is another reason most simply rely on their algos.

It’s not unusual for digital asset prices to move in similar patterns. Traders will often trade their entire portfolios in and out of local currency (or more often, Tether) at the same time.

The past month has been different though, with assets spiking or plunging at separate times. The movements often appear to have little to do with the individual fortunes of each blockchain project—for example, while most prices have been rising steadily, Litecoin (LTC) rose 5.8% today, Cardano ADA jumped 8.2%, and Ripple’s XRP rose 5.5% after a week of volatility. Others have mostly risen, but more steadily. Has there been any important news about Litecoin lately?

Accusations that cryptocurrency price movements are either “fake” or “manipulated” have been around almost as long as there has been cryptocurrency trading. Former BTCC CEO Bobby Lee has been outspoken on this topic, regularly accusing large crypto exchanges of “faking” their trade volumes for marketing purposes, using trading bots that shuffled money between various in-house accounts.

Then there were the infamous “Willy” and “Markus” trading bots at Mt. Gox. Analysts noticed strange patterns in the BTC price on that equally-infamous exchange in late 2013, speculating that they may have been responsible for Bitcoin’s big price surge around that time. (If it was intended to aid Mt. Gox’s financial woes, it didn’t help—the exchange shut down and declared insolvency in February 2014.)

To disentangle some of these factors, Dr. Nadler shows that some cryptocurrencies move together over time–a process known as “cointegration”–and this is a natural process for assets affected by the same factors. For example, in the world of equities Coca Cola and Pepsi stock prices move together because both firms are affected by prices of inputs, consumer preferences, and legislation. However, only few pairs meet the strict statistical criteria for cointegration, but BCH and BSV are statistically cointegrated.

Cryptocurrencies share only some common factors (e.g., vulnerability to legislation) but are in many ways different, so should not move in lockstep, especially if they are technologically distinct from each other. There is no clear rationale for why BCH prices should track, or much less, be above BSV prices given the material differences and business applications between the two currencies.

Evaluate and Build–don’t HODL or speculate

Those are just the best-known examples, but there are probably many more. That’s why it’s hard to recommend speculative cryptocurrency trading as a career, especially if you’re trying to stay ahead of the market the old-fashioned way—e.g. by following the news and announcements. You’d need a good trading strategy, some bots, lots of sophisticated infrastructure, trained statisticians to run it, trading experience, risk management systems, portfolio management, lots of capital, and also plenty of luck.

The better advice for anyone looking to succeed in cryptocurrency is still based on sound fundamentals and value rather than speculation: choose a project based on its technical merits, and its work in the industry to make its ecosystem the most usable one—regardless of daily price movements, which are an unreliable guide.

And remember, the crypto craze probably won’t last forever—at some point significant consolidation will occur. Regulators will probably also tire of the Wild West environment in which most exchanges operate, and step in. The most-scalable, and most legally compliant blockchain, would be the best choice… but don’t just buy and cross your fingers.

The inside story of how a handful of individuals saved Bitcoin from those who sought to corrupt it can now be told.

On July 4, members of the European Parliament proposed new amendments to the EU's anti-money laundering legislation which would bring NFT exchanges within the bloc's new AML/CFT framework.

Vaionex announced the launch of the easy-to-use Relysia web super-wallet, which it has been beta-testing for six months now with 22 partnering companies.

Novi users will lose all access to the wallet in September as Meta urges them to withdraw their funds, ending the roller coaster that has been the Diem project.