The new apps on BSV enterprise blockchain just keep coming, but the established ones are improving, too.

BSV’s most popular casino app, Peergame, recently added blackjack to its game selection. It’s been a hit with players so far, driving Peergame daily transactions up to over 30,000 for several days running. Peergame usually gets around 20,000 daily transactions.

Over 18,500 rounds of Blackjack played in the first 24 hours after launch🥳
Join the fun y'all😎
👉 https://t.co/PFycsSfCvA pic.twitter.com/3wpcr3peR5

What is Peergame, and how does it work?

When Satoshi Nakamoto invented Bitcoin, he envisioned a new internet capable of micropayments. One of the things he included with the original Bitcoin code was a poker client, so iGaming applications are a natural fit for the restored original protocol.

Peergame was first off the mark when it came to BSV casinos. It runs on the BSV enterprise blockchain, meaning all transactions are provably fair and are time-stamped on the immutable ledger that underpins the system.

On Peergame, players can make micro bets as well as wagers worth several BSV. The minuscule fees on the BSV blockchain allow for wagers of any size. Unlike online casino websites and apps on the traditional web, Peergame doesn’t take custody of players’ funds. However, because there are multiple potential decisions in blackjack, the team decided to make temporary table deposits a feature of this game. Every deposit/withdrawal is settled in real-time to and from BSV wallets like HandCash and Money Button.

With the addition of blackjack, Peergame now offers a full suite of real money casino games, including baccarat, roulette, dice, and other unique games like Coin Flip, Turtle Race, Ladder, Bitto, and Wheel.

How successful has blackjack been so far? On the day of its launch, Peergame saw 15,000 game rounds played on blackjack. Clearly, the addition of the world’s favourite card game was a popular choice.

Play-to-earn games like CryptoFights and casino games like those offered on Peergame now make up the bulk of transactions on the BSV enterprise blockchain. A 30-day view shows that gaming makes up over 95% of BSV’s daily transactions right now. 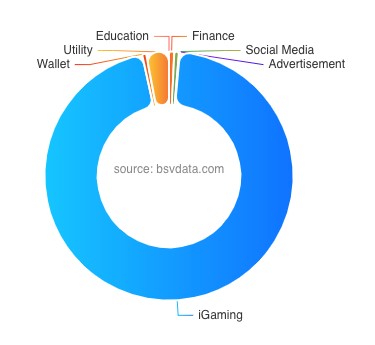 That’s likely to remain the case for some time, and in fact, the dominance of gaming transactions is likely to increase going forward. As apps like Haste Arcade take off and flourish, and as new casino apps like Zatto are launched on BSV, the technical prowess of the BSV enterprise blockchain will be on full display. Peergame’s launch of blackjack is only the beginning of great things to come!