Home » Tech » Bitcoin with billions of secure transactions per second, with IPv6 multicasting

There is a lot more to IPv6 and Bitcoin than “lots of new IP addresses.” We’ve heard about P2P transactions and communications, and we’ve heard about enhanced security. But how is all this achieved? At a recent webinar for the Digital Around the World event, Bitcoin creator Dr. Craig S. Wright went into the details with IPv6 Forum chair Professor Latif Ladid, Elas CEO Brendan Lee, and nChain Director of Research Dr. Owen Vaughan. The aim is to introduce these new concepts to outside developers, who can then leverage the BSV blockchain’s “superpowers” to start building tools for a better and more secure internet.

All the complete sessions from Digital Around the World 2022 are now available on the event website. This particular discussion has the somewhat mundane title “IPv6-based blockchain,” though its contents are anything but ordinary.

Some of the concepts described in IPv6 and Bitcoin are complicated and full of technical jargon. This may be necessary to present the ideas at these early stages, and Dr. Wright calls for processes and descriptions to become easier to understand, which nChain is also working on.

“What you’re talking about is promoting the power of the end users, which is fundamental,” Professor Ladid notes.

Bitcoin was designed as an electronic cash system with the ability to send payments directly from one party to another. Dr. Wright puts it simply: this means “directly”—Alice doesn’t pay Bob by sending information to a mesh server; she sends it directly to Bob. Bob registers the transaction on the ledger (i.e., the blockchain) via Bitcoin’s “small world” network, which timestamps it. He also notes the reasons simplified payment verification (SPV) is necessary to streamline this process: a recipient (Bob) must be able to check that the transaction is valid by checking block headers only, not the entire Bitcoin blockchain.

Currently, most recipients will check if a transaction is valid by searching the entire network for its details (difficult and inefficient). With SPV, the sender (Alice) can “hand the transaction” directly to the recipient (Bob), who immediately knows that it’s valid.

What does this have to do with IPv6?

“IPv6 has a lot of functionality that improves the operation of P2P networks,” Dr. Wright says. This is the internet’s original promise of direct communications.

IPv6’s “multicast address” features (remember that term) play a large role here. Nodes register as part of the network, allowing them all to receive transactions simultaneously. Bob doesn’t need to broadcast his transaction to all nodes; he only needs a single message to the network. Likewise, transaction processors (miners) don’t need to broadcast it to every machine after solving a block. The same single message to a multicast group will do. 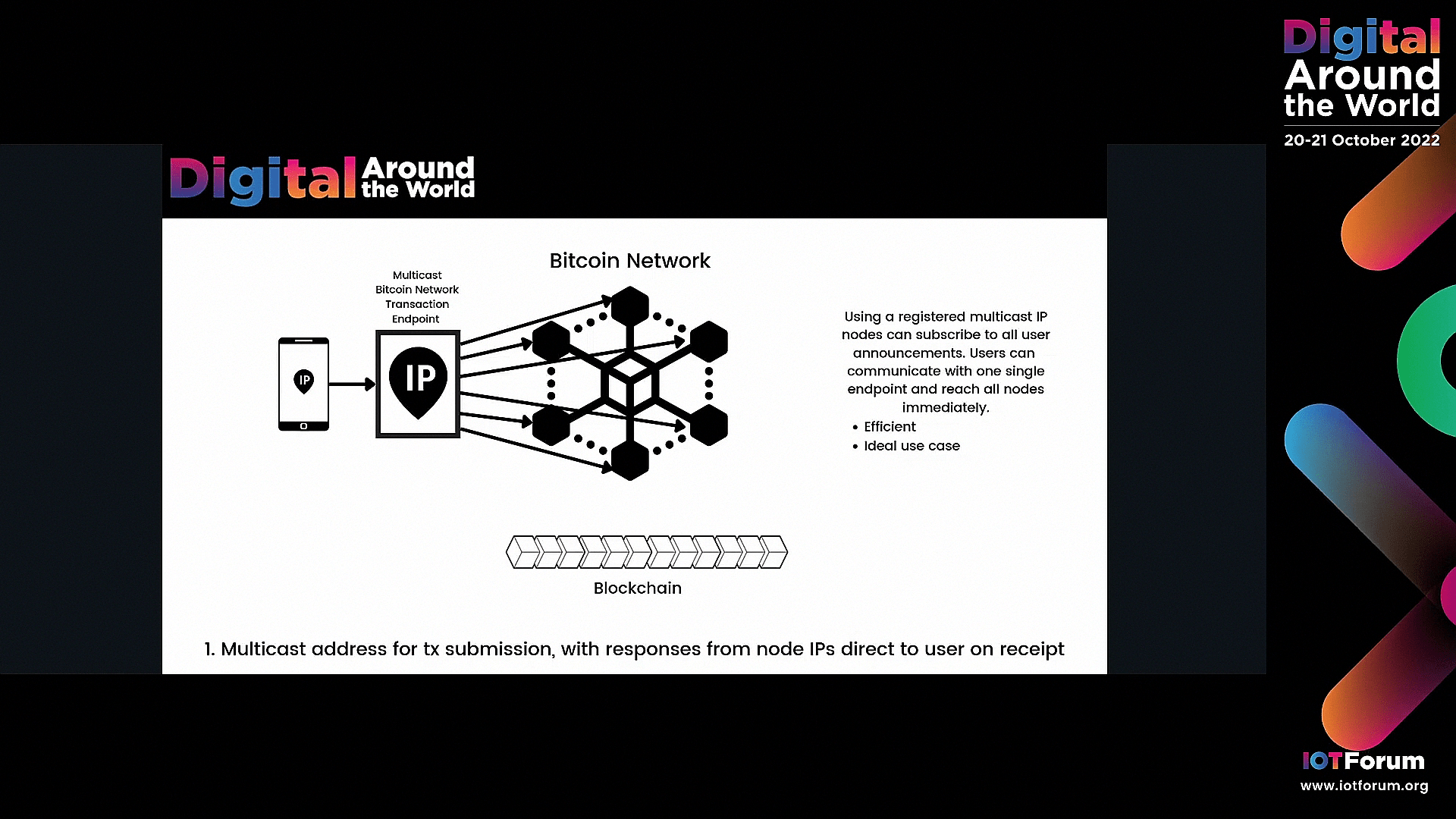 An exponentially-increasing number of devices will connect to the internet at ever-lowering costs per device, including $10 tablets and IoT sensors at the lower end. DNSSec in IPv6, coupled with blockchain records, also means new and better cybersecurity models than today’s shell firewall and authorized certificate techniques. Dr. Wright mentions that nChain is developing concepts using broadcast and revokable encryption that can produce “an encrypted file that is provably owned (just) once” and is impossible to copy. 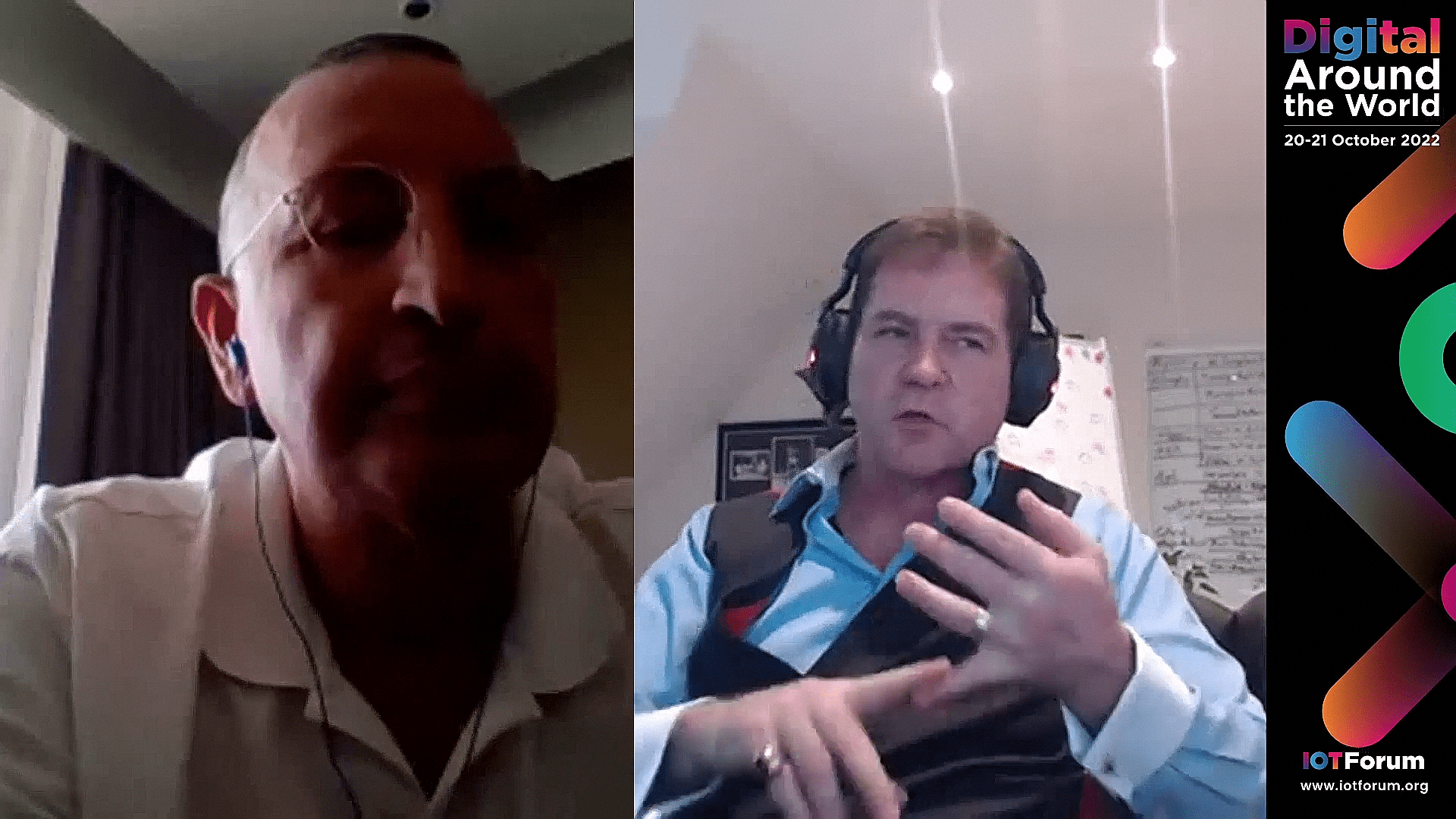 “Transactions are going to be very different in the future,” he adds, with different transaction formats containing information embedded in their headers and data to set (for example) payments and costs, configurations, firewall policies, security features, access, and NAP policies, etc. with interactive and updated communications—all based on what individual users are using.

“Decentralization doesn’t mean people running around saying ‘government can’t stop us,’ it means moving machines to the edges of the network. The promise of that the internet was meant to be 20-30 years ago.”

It means owning information and proving you own it without having it go through “Silicon Valley hubs” (one of Dr. Wright’s best-known nemeses), whether it’s cash/payments, your private data, classified documents, business contracts, and much more. The Bitcoin blockchain records all this information and makes it publicly validatable without the information itself being revealed. You can always enforce ownership and see if someone’s trying to cheat the system.

Bitcoin is just the technology that sets the base layer to all this. It isn’t meant to decide policies and laws that define ownership, just like it doesn’t determine whether a document is classified or not. Humans ultimately set and enforce these rules, while Bitcoin enables their efficient operation.

Why this needs to happen on an open blockchain

All this can happen on an open and publicly-accessible network. In fact, these are the features that keep the system more honest, whereas so-called “private blockchains” lack the ability for anyone to audit the records. Essentially, private blockchains are just more closed systems where you must trust the operator is doing the right thing.

We need to think about creating different models for these networks, Dr. Wright continues. Just as today’s cash/digital transaction systems treat buying a coffee and buying a car differently, so will these models for different types of data transfer/transaction. IPv6 features allow devices on the edge parts of the network to communicate directly (securely) with each other at scale.

All told, giving people the scaling solutions to build new and innovative tools for Bitcoin will enable the development of new use-cases in data management. These will go far beyond the initial scope of “digital cash.” Dr. Wright also describes how the more-secure Proof of Work (PoW) Bitcoin network becomes more energy-efficient as it adds more users—energy consumption remains the same whether there are 100 transactions per second or a billion.

Other speakers in this webinar event go into more technical detail about IPv6, using multicast addresses to submit transactions, and how their companies are working to make end-to-end communications a reality.

Elas CEO Brendan Lee echoes Dr. Wright’s message of ordinary users getting their communications into the deeper reaches of Bitcoin’s small-world network as quickly as possible. Rather than user apps (or miners’ machines) connecting and sending message copies to multiple notes, IPv6’s multicast address groups cut this down to one, moving the heavy lifting of propagation to deeper layers of the network. 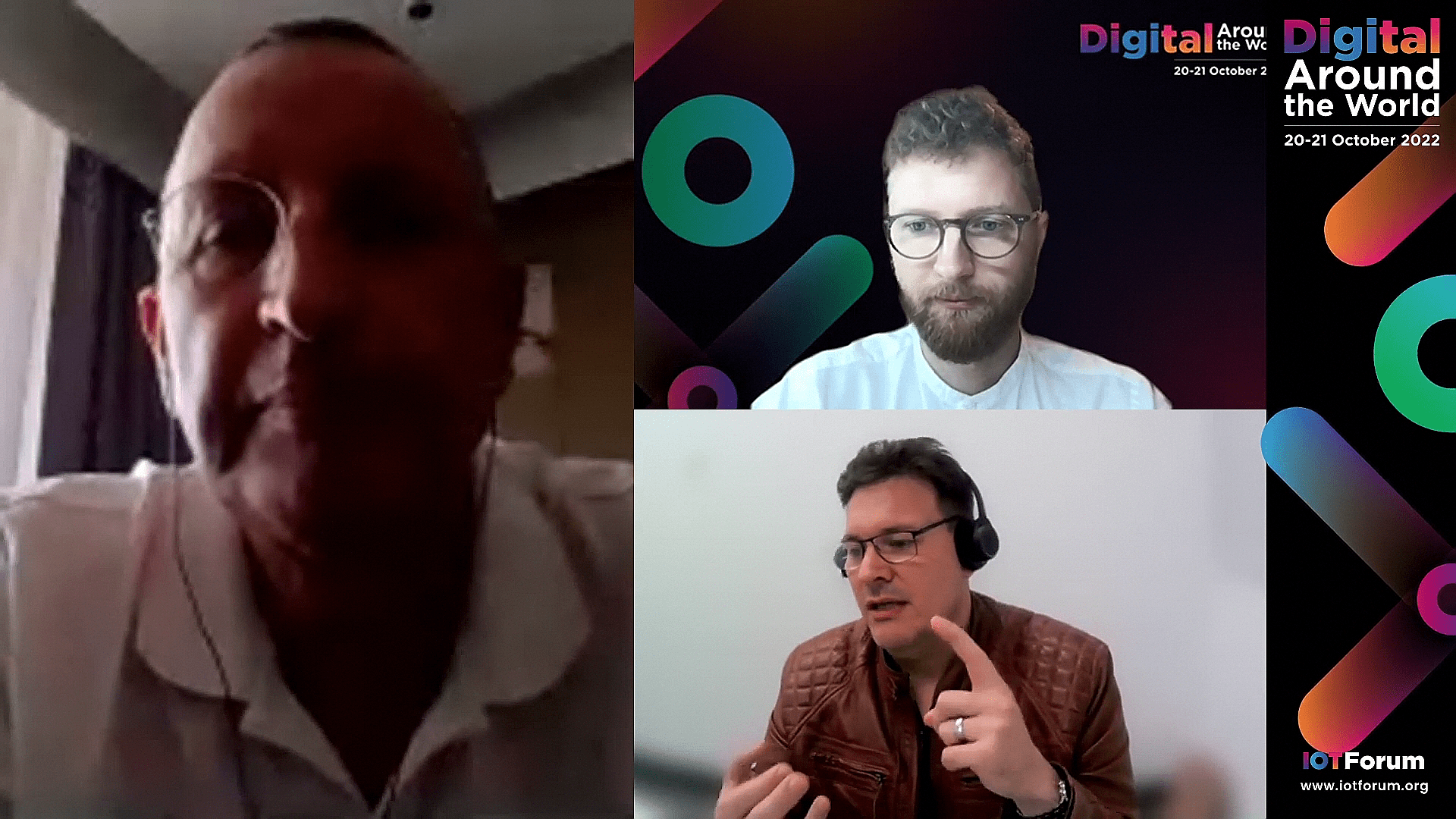 He describes how peers on the network can be coded to connect and negotiate to establish shared multicast addresses (mentioning CGA and Diffie-Hellman secret sharing). Different levels of communication are handled by parts of the network (both hardware and software) optimized to perform each task. It’s an environment “where every millisecond counts.” Theoretically, he says, it’s possible to even have multisig addresses requiring millions of keys to complete a transaction instead of the usual small group.

nChain Director of Research Dr. Owen Vaughan gives a “more foundational talk” on the differences between data “packets” and blockchain transactions, user-to-user payments, and IPv6 addresses vs. “payment addresses.” It’s interesting to note that the format of Bitcoin transactions, as first designed by Satoshi Nakamoto in the late 00s, looks quite similar to IPv6 headers, he says.

He also describes some key differences between Unspent Transaction Output (UTXO)-based blockchain models (such as Bitcoin) and “account-based” blockchain models (like Ethereum). UTXOs are independent of each other and can be processed in parallel, whereas the account-based model must process them in sequence.

He says that past services, including BIPs (Bitcoin improvement proposals), reflect the needs of small-use blockchains and account-based models. IPv6 will allow things like direct invoicing, verifiable identities (where desired)

The conversation around IPv6 and Bitcoin is still very much at the conceptual stage. Continuing to educate developers and users on their features and benefits will mean more useful (and far easier to understand) tools in the future. Eventually, end-users probably won’t even notice and, like Bitcoin itself, blend into the background as “plumbing.” But the end result will be a better, faster, and more honest internet.