Only a few weeks after launch, HandCash’s new developer SDK, HandCash Connect, has made good on its promise to simplify development on Bitcoin (BSV). Bitcoin users are already reaping the rewards with exciting new applications recently launched using HandCash Connect. One of these applications is the mobile game Haste. Haste is a great example of an application that is only possible on Bitcoin (BSV) and is serving as a proof-of-concept for a powerful incentive mechanism that can be used for countless future games and other applications.

So what is Haste? Let’s separate Haste into two parts: the game and the incentive mechanism.

The game for Haste is quite simple: react as quickly as possible to the stimulus. After initiating a game, the user waits for an orange circle to appear on their screen in a random position. When they see the orange circle, they press it as fast as they can. The time it takes to press the circle, measured in milliseconds (ms), is their score and the lowest score wins.

The most interesting part of Haste is the micropayments-based incentive mechanism, which could be applied to almost any game with a dynamic leaderboard. Each play on Haste costs money (Bitcoin) to initiate with different tiers available depending on the player’s risk tolerance, from less than ½ of a U.S. cent to nearly $200. After each round the payment is distributed to every player who had previously scored on the leaderboard, rewarding the highest ranked player the highest and reducing the payout as the scores move down the leaderboard.

Let’s look at an example where I play the “Micro” level which costs $0.19 per round. The game prompts me that the current top score is 275ms and the “in the money” score (100th on the leaderboard) is 454ms. If I react fast enough to place on the leaderboard I will pay my fee to everyone currently on the leaderboard but I will earn future fees from everyone who plays after and fails to beat me. 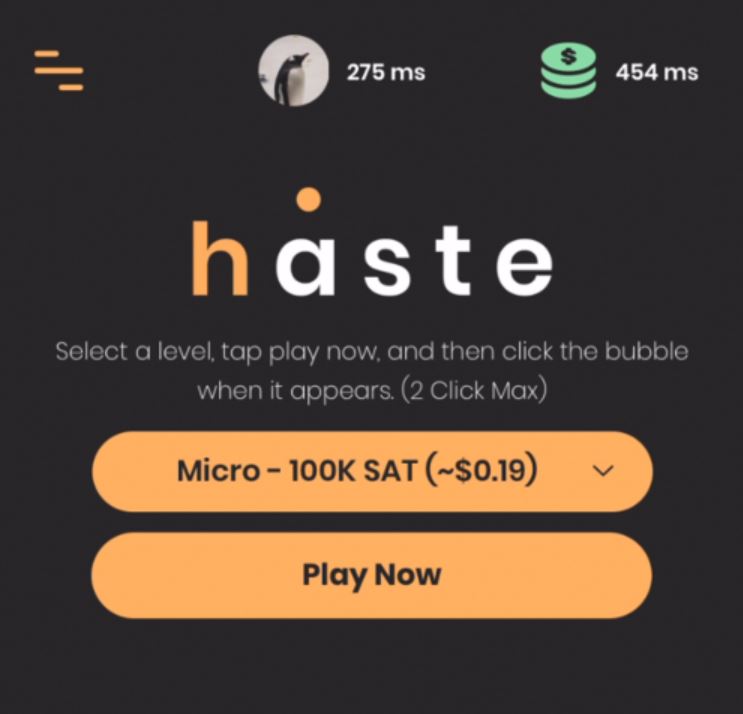 In this example I scored 417ms, enough to place 70th on the leaderboard. 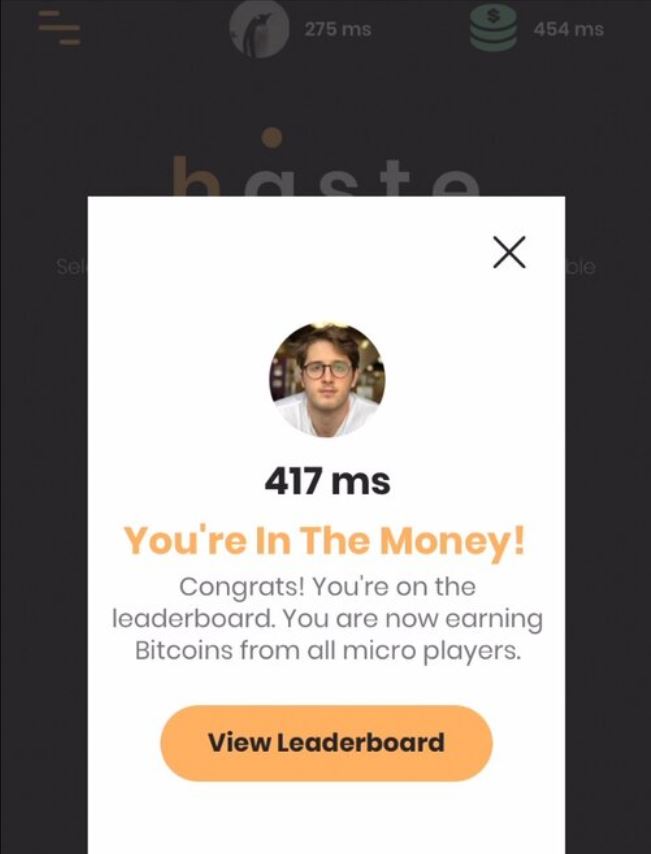 Because I failed to take the top spot, my $0.19 is paid out to the players comprising the top 100 spots on the leaderboard as follows:

Because the top 100 spots on the leaderboard are held by 7 different players, my small $0.19 payment is split into multiple outputs going to 8 different wallets (each player, plus Haste), all transferred in real time. With my score of 417ms, I am (for the time being) #70 on the leaderboard and will earn ~$0.0013 every time someone tries and fails to beat me. Almost immediately after playing, the micropayment rewards start flowing into my wallet in real time. 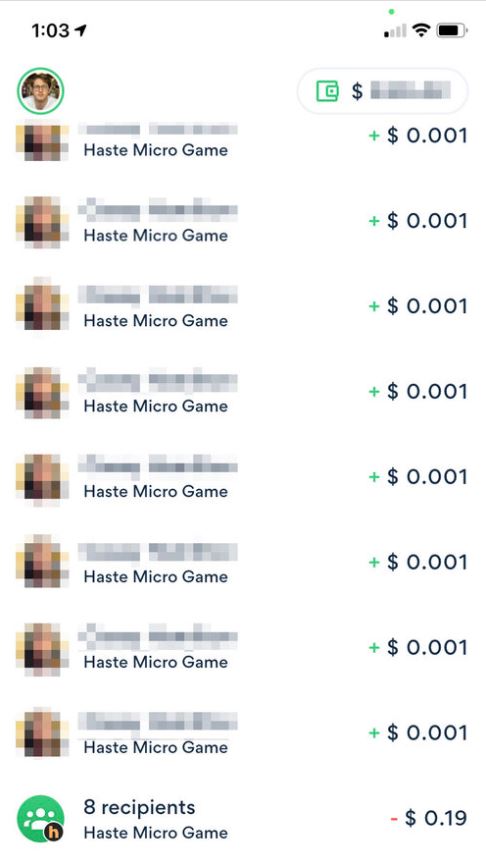 As players top my score, I move down on the leaderboard, likely falling off the top 100 eventually.

What’s so exciting about Haste and HandCash Connect are the implications for the future possibilities of games. Today, the gameplay of Haste is relatively simple and the audience of HandCash users with Bitcoin in their wallet is relatively small, but imagine a world where millions of people have Bitcoin or USD tokenized on Bitcoin and the game goes viral. Remember Flappy Bird from 2013 and 2014?

By January 2014 Flappy Bird had over 50 million downloads and was generating $50,000/day in revenue from in-app advertising. Flappy Bird gameplay was extremely quick and addictive which often caused users to play many consecutive rounds.

Imagine if Flappy Bird removed advertising and substituted Haste-style micropayments and leaderboards. What would happen to its business model and gameplay?

$50,000/day in ad revenue is nothing to scoff at, but for a viral game with 50,000,000 downloads and engaging/addictive gameplay, it is actually not very much. Let’s imagine 5% of people who download the game play daily for 5 rounds on average per day, which feels quite conservative, especially at peak virality. This gives us 12.5 million rounds played per day. If each round was played through HandCash for $0.005 (Haste’s lowest “Dust” tier price) this suggests $62,500 per day of revenue, an increase of 25%.

Now let’s imagine peak virality. Maybe 75% of people who have downloaded the game are playing it on average 15 rounds per day. This suggests over $2.8 million in revenue per day, an increase of over 56x relative to the ad revenue.

Even a short window of this level of virality that passes in less than a week makes creating a game like this extremely lucrative.

Substituting ads for micropayments and incentivizing gameplay with a Haste-style leaderboard also has an enormous impact on gameplay. Plus, if the gameplay is superior, the business model can look even more attractive because the downloads and rounds/user should increase as well.

First off, let’s make a blunt observation: Flappy Bird’s gameplay is more fun than Haste. This is a statement that I imagine would not insult Haste’s developers. Flappy Bird’s graphics were more visually appealing, it included audio and music, and the challenge was more engaging than that of Haste. The fact that Haste has been able to prove its popularity (albeit within a small market) without these benefits, is a huge testament to the incentive model pioneered by Haste’s developers. It would be powerful if a superior game like Flappy Bird employed Haste’s incentives and enabled its users to earn money.

As of writing, my #70 spot on Haste’s Micro level leaderboard has yielded me about $0.04 cumulative through ~35 payments over ~2 hours. If instead of placing #70 on Haste’s leaderboard I placed #70 on Flappy Bird’s leaderboard at peak virality (leaving aside how this would be a more difficult task), what could I have earned? If we assume the same inputs as before (50 million downloads, 75% of downloaders playing 15 rounds per day, each round costing $0.005) and assume uniform rate of play over a 24 period, this suggests 23.4 million rounds per hour.

If my reward for placing 70th on the leaderboard grants me the same percentage of each round’s cost as in Haste (0.7%), over the course of 2 hours I could expect up to $1,640 of profit.

Now imagine I am elite at micropayment-incentivized Flappy Bird and earn the #1 spot. If that rate of play is rewarding me at Haste’s 10% payout for the top spot, I could earn over $281,000 per day!

It’s clear that this level of incentive should generate even more virality and gameplay. Feed those updated numbers back into the assumptions about how many players are playing and see what you get for both player and developer revenue.

What the naysayers fail to understand

A common criticism of this model is that users won’t want to pay for each round of a game when they are accustomed to playing this type of game for free with ads (paying with their time/attention). This is due to both the added friction of needing to link a payment method prior to playing, as well as the cost of playing itself. At first glance this might seem damning, but when considering a game like Haste or Flappy Bird built on Bitcoin, the criticism falls flat. For starters, we think linking a payment method to an application is difficult partially because the existing internet lacks an electronic cash. In the “50 million download” scenario outlined above, we are assuming that Bitcoin has proliferated beyond its current audience and use cases and there now exists such an electronic cash with at least 50 million users of Bitcoin wallets like HandCash. Today on HandCash, the ability to sign into an application and link your Bitcoin payment method is extremely simple. With only a few clicks you can authorize the application to connect to your wallet and it will automatically withdrawal funds as you go (you can also set a maximum spend threshold as a security feature). Not only is linking payment as simple as creating an account, but creating an account is easier than the experience people are familiar with on most applications today. Once you have your single HandCash account, you no longer need to give websites your name, email address, and phone number to create one-off accounts. Your Bitcoin wallet becomes your single sign-on, much like how people use Google sign-on today, but with added privacy and functionality like access to electronic cash.

So what about the actual act of paying to play a game? Will this turn users away? Maybe some, but it is likely that the users who join because of the ability to earn real money will increase the user base beyond those that are pushed away because of the need for payment. If we accept the above usage assumptions, then at peak virality the average user is paying less than $0.08 per day to play, and the ability to pay is as simple as putting a coin in an arcade machine since virtually no account set-up is needed. Importantly, this 8 cent cost is ignoring any money a user might earn back. Micropayments enable pay-per-round gameplay which cumulate to an insignificant cost and wallets like HandCash make initiating the payment as simple as handing someone a few pennies.

Additionally, there is nothing preventing the creator of our hypothetical Flappy Bird on Bitcoin from including a free tier. Maybe that tier is monetized through ad revenue just like the original game, or maybe it is simply free, a place for users to practice before they make it to the $0.005 big leagues.

The ongoing experimentation of entrepreneurs creating applications like Haste with developer tools like HandCash Connect is extremely exciting to witness. The ability to process tiny micropayments, securely send them around the world in real time, and rest assured knowing that your business model is feasible at scale and your success won’t be your own demise (see: CryptoKitties) is ONLY possible on Bitcoin (BSV). Unbounded Capital is extremely honored to be investors in HandCash which is facilitating this type of application development. We know applications like Haste are just the tip of the iceberg for what will be created on Bitcoin in the coming months and years.

At Unbounded Capital we are confident that the potential of Bitcoin will incentivize the Haste’s of today to be the Flappy Bird’s of tomorrow but with much more upside potential than was possible prior to Bitcoin’s proliferation as BSV. We anticipate entirely new markets being unlocked by Bitcoin’s micropayments and data ownership functionality and expect businesses like HandCash and Haste to play a significant role in defining the business landscape of the next several years to come.

To try out Haste for yourself download the HandCash mobile wallet (available in the iOS and Android app stores), load up your wallet with some Bitcoin, and connect to Haste.