There is an assumption among some people that all bitcoiners fit into easily defined collectivist silos of one political variety or another. Given the political leanings of members of the Metzdowd cryptography mailing list, for example, a great many people assumed Satoshi Nakamoto was a libertarian or an anarchist activist since the other members were largely of such worldviews. However, Satoshi’s political leanings were extremely ambiguous, and he only ever paid tepid lip service to such views himself.

In a discussion with Hal Finney, the importance of “at home computer projects” became the subject of a minor debate. Finney believed in the sufficiency of altruistic nodes in maintaining and securing the network, but Nakamoto hit back hard in opposition to the “altruism” comment with his boldest political words ever spoken:

It’s very attractive to the libertarian viewpoint if we can explain it properly. I’m better with code than with words though. – Satoshi Nakamoto, November 14, 2008

Out of context, this statement seems ambiguous, but when reading the whole thread, Nakamoto was making a contrasting point about the value of libertarian versus altruistic incentives in Bitcoin’s security. While this does not necessarily imply his own opinion on the rest of the libertarian worldview, it does show his aggressive view of bitcoin governance. Most importantly, he notes that he is not likely capable of explaining his own point in words because of his personal limitations in written communication. Instead, he heavily implies that the code expresses a libertarian view of nodes and network governance over and above an altruistic one. This certainly makes sense in the context of section five of the Bitcoin white paper where the network governance is plainly explained to be a raw, Darwinian, capitalistic contest of governance by the fittest contributor of proof of work under which all nodes (except one) fail to mine each block every ten minutes.

People often infer a political undertone to the message added to the genesis block. The timing of Bitcoin’s release amid the collapse of the decade-long housing bubble, seems politically planned, but this notion falls apart on closer inspection. Bitcoin would have taken years to design, test and execute, but the public first learned of Bitcoin only about six weeks after the collapse of Lehman Brothers, which is when the bubble really burst. Unless we are to believe that Nakamoto was waiting to release a completed Bitcoin protocol in a specific socioeconomic climate, it seems at least as likely that the timing was convenient, but not intentional.

“The Times 03/Jan/2009 Chancellor on brink of second bailout for banks,” may also not be political at all. The article itself is a positive look at taking out loans against a resilient and diverse economy, and certainly does not make a typically libertarian point about the politics of sound money in any regard. So, it is at least as likely a simple timestamp as it is anything else. 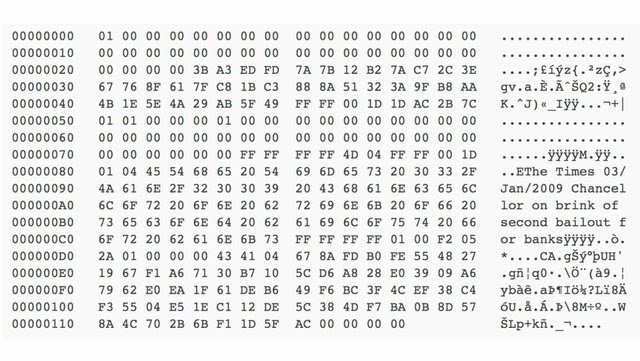 Finally, there is this P2P Foundation post by Nakamoto where he states:

The central bank must be trusted not to debase the currency, but the history of fiat currencies is full of breaches of that trust. Banks must be trusted to hold our money and transfer it electronically, but they lend it out in waves of credit bubbles with barely a fraction in reserve. We have to trust them with our privacy, trust them not to let identity thieves drain our accounts. Their massive overhead costs make micropayments impossible. – Satoshi Nakamoto, February 11, 2009

This is also quite political in regards to monetary policy and bank practices, but when pressed, he clarifies that his statements are far more practical than political, and that he was not necessarily opposed to an adjustable supply in Bitcoin at all:

“…there is nobody to act as [a] central bank or federal reserve to adjust the money supply as the population of users grows. That would have required a trusted party to determine the value, because I don’t know a way for software to know the real world value of things. If there was some clever way, or if we wanted to trust someone to actively manage the money supply to peg it to something, the rules could have been programmed for that.”

In 2019, I wrote about the need to apply proof of work to weather data. At the time, the chain had not yet mined multi-gigabyte blocks, and BSV’s critics were excited to deride the network as “just a weather app” while missing the salient point about removing politics from global socioeconomic issues. They were so busy with their narrative that they ignored the fact that the climate is one of the most politically contentious issues in the world. In fact, one’s views on the nature, cause or solutions to “climate change,” can trigger critics to assume whether the rest of that person’s views put them categorically on the right or left in ideology or libertarian to authoritarian in governance preference—which is unfair to anyone who does not fit the average political profile of a typical human being who believes one thing or another about the climate.

It’s been said that there are “lies, damned lies, and statistics.” In the information age, statistics should be downgraded simply to “data,” but the sentiment still rings true. Maybe truer! Without proof of work applied to data, politics wins the day. While “global warming” or “climate change” was the albatross political issue for much of the last generation, COVID-19 seems to have handily replaced it in the last year and a half.

Today, too many people are incapable of separating the science of the pandemic from the politics of the pandemic, and it is becoming increasingly common for inferences about broader political issues to become attached circumstantially to one’s belief in the virus itself, the danger/efficacy of the virus and the various legal responses to the virus.

Many of these are extremely difficult questions to answer because the data comes from sources that are not trusted by one political worldview or another. And unfortunately, there’s no proof of work validating the infection rate, nor the mortality rate relative to infection. And since virology and epidemiology, for all of their rigor, are still largely “guess-and-check” sciences in the first place, it is really difficult for anyone to take a strong position on the best path through this pandemic. Because of our hierarchical political systems, “leaders” have a need to be perceived as leading, so regardless of the lack of truly hard data, leaders take strong positions based on the rest of their worldview.

And now we have political debate instead of any talk about real science.

Viruses are such a unique aspect of reality that scientists do not even widely agree on whether they are “alive” or not, and there are multiple types of viruses that can be categorized into two basic families:

There are subcategories and branches, and they all mutate aggressively if unchecked, and this COVID-19 situation is the first coronavirus pandemic since the advent of modern medicine. All that to say that medical and political responses, even if meant with the best intentions, are likely to fail a significant number of people who will become victims to the virus itself or the consequences of policies in response to it.

And this is where the data and politics converge. In “How ‘inconvenient’ WeatherSV app can change climate debate history,” I made the case that only through the thorough aggregation of data and its submission to proof of work can we get to a place where the climate debate can focus strictly on the facts. If immense data can be collected and processed, anomalies (either from error or malice) could become easy to catch, and then suddenly the trust model of the science would change from groups of people who question each other’s motives, worldview, financiers, etc.… And we could focus merely on negotiating a way forward from a place of much more trustworthy facts.

This thesis applies equally well to COVID-19 data, which must be de-politicized if we are to come to a rational solution for the global economy in the face of this pandemic and the fallout that it has created.

The value of living in a data-driven, post-political world is incalculable. Over the last year and a half, families have fallen apart, colleagues have ceased to respect each other, and we have seen the largest amount of increased economic friction in a generation. But it also exacerbated existing political divides among good people.

In places like Florida, it is illegal to demand masks in most situations. In places like Australia, people need permission to leave the country, and lockdowns are among the strictest in the world—all while the danger of the disease itself is debatable. And what’s worse is that any discussion of the efficacy of either libertarian or authoritarian policies leads people to make assumptions that can sometimes lead to total breakdown of healthy communications. In many places around the globe, we have even seen such behavior devolve into physical violence, which is a travesty.

But there is a way forward. If a service similar to WeatherSV could be deployed which could aggregate, sort and provide permanence and indexing of the known statistics about COVID-19 and secure them to the BSV blockchain with proof of work, it is possible that we can ascend to a place of post-political problem solving in much the same way that I believe we can make more rational decisions about policies that impact the climate and the economy.

The technology is here. The WeatherSV people could mostly copy/paste the business model but using public data feeds about the pandemic, and people who care about the integrity of the data could fund feeds so that we can all benefit from the data integrity that only BSV’s proof of work can provide.

So, is Satoshi Nakamoto a libertarian or authoritarian? It doesn’t really matter, because Bitcoin allows us to work with more complete, more reliable data. That data, coupled with the incentives created by bitcoin, could soften political hearts, and make the world a better place regardless of the worldviews of individuals, and that is a very liberating idea!