The noose is tightening around BitClub and their $722 million Ponzi scheme. BitClub Network Promoter Joseph Frank Abel admitted to receiving money from investors for shares in the BitClub Network mining pool that weren’t registered with the U.S. Securities and Exchange Commission (SEC).

Abel was indicted along with four others in December of 2019, for their involvement in what prosecutors are calling a ‘high-tech Ponzi scheme’. Bitclub CEO Russ Medlin, along with Matthew Brent Goettsche, Silviu Catalin Balaci and Jobadiah Sinclair are Abel’s alleged co-conspirators, and are charged with wire fraud conspiracy in relation to a scheme to defraud victims into investing in ‘shares’ of the BitClub Network mining pool, despite knowing that it would not be profitable.

The indictment alleges that the group went as far as manipulating the numbers presented to investors to convince them to pour more money into the scheme. Abel, as well as the other defendants, is charged with conspiracy to offer and sell unregistered securities in association with the scheme.

According to the indictment, the scheme was flagrant: prosecutors submitted evidence of online chats where the co-conspirators discussed forging evidence of the mining power that didn’t exist. Goettsche offered Balaci a $50,000 bonus ‘to get us “proof” of our own pool by end of month’. When asked if they were really mining, Balaci said: ‘well, having a mining pool is 1 thing… showing mining power is a totally different animal.’ They then openly discuss ‘convincing the morons’ by offering a 5% mining bonus to miners in an effort to draw in power to their pool. 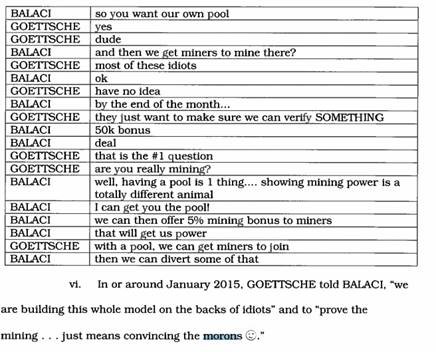 More damning, as far as Abel is concerned, is correspondence included in the indictment which shows that Abel and Co. were fully aware that they were offering unregistered securities, with CEO Medlin sending Abel an article about multi-level-marketing schemes, essentially the kind alleged to be run by BitClub, and their likelihood to be offering unregistered securities.

With Abel admitting to his part in the scheme this week, it will be interesting to see if his co-conspirators are as forthcoming.

The BitClub scandal is a blemish on the digital currency community if the rest of the charges stick, being another case of a bad actor feeling that they exist outside the reaches of the law and duping unwitting investors into signing onto a scam.

In particular, the callous manner in which BitClub’s personnel discussed the scheme should be cause for concern, as the service has been used widely in the community and the owners evidently being well-connected. In December 2019, Twitter user @Bitcoin posted a video in which Roger Ver is seen having a dinner and an in-depth with BitClub CEO and indictee Russ Medlin:

Medlin is now in custody, but was the last of the defendants to be apprehended after fleeing to Jakarta, where he was arrested for an unrelated issue: paying underage girls for sex.

Following the indictments, Ver distanced himself from BitClub Network, but the above tweet still remains, together with other strange videos including this one, where Ver deletes a tweet critical of BitClub Network in the presence of CEO Russ Medlin. Ver is also at the heart of highly publicized November 2018 Hash War, where it has long been speculated that BitClub hash was used by Ver and his Bitcoin.com mining operation to bolster their takeover of the BCH ticker symbol.