Home » header_menu » Wall Street is coming for your crypto

“In bringing regulated, connected infrastructure together with institutional and consumer applications for digital assets, we aim to build confidence in the asset class on a global scale,” Intercontinental Exchange (ICE) CEO Jeffrey Sprecher mused in an accompanying press release, “consistent with our track record of bringing transparency and trust to previously unregulated markets.” That’s correct, boys and girls, Wall Street is going to tame icky cryptocurrencies by introducing something our devs and users somehow forgot along the way, trust. Oi vey. News ICE had been working in relative secret for over a year on its cryptocurrency project, Bakkt (pronounced ‘backed,’ as in backed by something), was met by proponents of crypto mainstreaming with glee.

Such a reaction might even be expected from the likes of Bitcoin Core (BTC) devs Blockstream. ICE and it buddied up a few short months ago for their combined cryptocurrency data feed. The Cryptocurrency Data Feed provides information to more than a dozen exchanges: order books, prices, trading volume, etc.

ICE, of course, is parent to arguably the most important stock exchange on the planet, the New York Stock Exchange. That ICE has slowly, methodically begun to enter the ecosystem should be carefully considered beyond just the potential for mooning BTC prices. Bakkt is to be its own mini crypto universe, and the potential implications are real going forward.

Press accounts seemed unusually preoccupied with Starbucks’ participation. And while, sure, the coffee retailer is a kind of market maker, Bakkt means considerably more than a solid cup of joe. As former Wall Streeter turned enthusiast, and now canary in a crypto mineshaft, Caitlin Long observed, Bakkt’s reality is “likely the beginning of Wall Street creating financial claims to bitcoin out of thin air (and not backed by actual bitcoins), which could offset some of Bitcoin’s algorithmically enforced scarcity.” Ms. Long is someone this column urges all readers to follow. She is a stud.

Indeed, any price mooning action on the BTC side of things flatlined, as did the market generally, declining after ICE news. The cool aspect, however, to all of this is the overt acknowledgement crypto has arrived. Wall Street is no longer playing coy, sniping in the press and then buying on the side, taking up positions. A lot of it is now in plain sight. 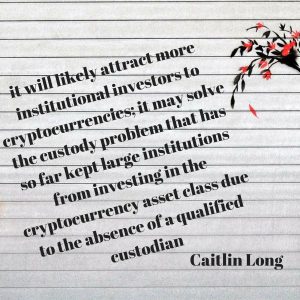 Ms. Long is careful to note Bakkt could mean “it will likely attract more institutional investors to cryptocurrencies; it may solve the custody problem that has so far kept large institutions from investing in the cryptocurrency asset class due to the absence of a qualified custodian, which the SEC requires for investment advisors that manage $150 million or more, it may help regulators become more comfortable with the sector to see ICE involved, and most importantly—it will probably attract corporate issuers to raise capital using the Bakkt ecosystem,” she clarified.

I’ve always thought Wall Street just wants to slum it with us. They can, at least for the moment, jettison custodians and exchanges, let go of trustees and underwriters, leaving the world of transfer agents far behind. Regulator frictions give way to a pure capital in capitalism with regard to crypto. We settle as men ought, immediately. We don’t need your stinking counterparty risk. And that frictionless world is what crypto has worked to create.

The irony, of course, for all of its hotshot congratulatory language, Wall Street is very risk averse. It’s probably not too controversial to insist the modern point of legacy finance is to fight risk at virtually any cost.

The fight for control begins 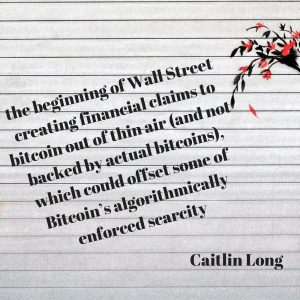 Ms. Long again explains how Wall Street’s “only shot at controlling cryptocurrencies is to financialize them via leverage—by creating more financial claims to the coins than there are underlying coins and thereby influencing the underlying coin prices via derivatives markets.”

This is a crew drunk on easy credit, money sloshing around everywhere. Networks such as Bitcoin Cash (BCH), for example, cannot be taken over so easily, and as a result traditional finance has to play its game its way through a kind of inflationary credit.

It’s all a bit like fractional reserve banking. In fact, that’s exactly what it is. Wall Street is bent on doing to crypto what it has done to commodity money such as gold. Gold, once a heroic way to subvert governments has essentially become their lapdog. Read gold press accounts: they’re waiting for central banks to move, praying that governments will favor their metal yet again. Pathetic.

Housing crises again, only with crypto Immediately what it appears Wall Street intends on doing is chipping away at the scarcity carefully placed in Bitcoin, the go that ultimately drives its value. A credit market on top of a spot market, created by banks, tossing IOUs around will surely violate a prime principle of digital scarcity. As Ms. Long urges, “If Wall Street begins to create claims to bitcoin out of thin air, unbacked by actual bitcoin, then Wall Street will succeed in offsetting that scarcity to some degree.” We’ll see come November.

This is to say nothing of forks, forks which are for sure going to happen. Could you imagine the crash of leveraged institutions after a fork if they’ve chosen the less popular or abandoned chain? The mind boggles. There is no out if that happens, and collateral financial damage could be on the catastrophic side.

Finally, returning to the initial quote by Mr. Sprecher, where he insists ICE and Bakkt will bring operations “consistent with our track record of bringing transparency and trust to previously unregulated markets,” one has to wonder what he meant by that cringe worthy statement. Cryptocurrencies are the epitome of trust, and Bitcoin Cash, for example, is the greatest human iteration of financial trust the world has even known. Its transparency is unmatched. And all of that was accomplished without Wall Street, in spite of Wall Street. Who knows. Maybe Bakkt’s entrance into the ecosystem will force Wall Street to up its game, to become more transparent, and finally, honestly, earn the public’s trust by learning from crypto.

Note: Tokens on the Bitcoin Core (segwit) Chain are Referred to as BTC coins. Bitcoin Cash (BCH) is today the only Bitcoin implementation that follows Satoshi Nakamoto’s original whitepaper for Peer to Peer Electronic Cash. Bitcoin BCH is the only major public blockchain that maintains the original vision for Bitcoin as fast, frictionless, electronic cash.