Home » header_menu » ComicCon 2018 in San Diego cozies up to crypto

Exhaustion gave to leaving my iPhone fully gassed, volume and all, bedside. In dead, early morning silence a notice chime pierced. Sound rattled tooth fillings, doubling down after a few Mississippi of not tapping screen notifications soon enough. The second zing refused to leave me peace.

The name Kyle appeared in a cloud of artificial light. Kyle? Oh, Kyle! As in the head of marketing for Robinhood. As in the smartphone application racking up billions in valuation as it embraced loss leader, free, cryptocurrency trading, including Bitcoin Cash (BCH). As in a meeting we’re set to have later that early afternoon to discuss his company’s cross promotion with Lionsgate at ComicCon in San Diego (CCSD). As in why is this dude hitting me up after one o’clock in the morning!

Use mensch glibly, and few who grasp its true import will believe your personality assessment ever again. Kyle Mark Alan Zink is a goddamn mensch. After a serious car accident that night, he landed in an emergency room until the wee hours. While he waited to discover the extent of his upper body trauma, or worse, Mr. Zink thought enough of our scheduled rendezvous to let me know he wouldn’t be joining. I’d love to suggest his action a kind of minimum professional standard, but please.

Guys like Mr. Zink have a motor difficult for most outside the crypto space to fully grasp. These folks do not stop. Crypto doesn’t sleep. Decentralized currencies, borderless, mean something is always happening. It’s even changing our notions of time. Crypto-centric professionals live in decentralized time. The more successful in the ecosystem navigate this new reality better than everyone else.

As a young, hungry company Robinhood relies on platforms like ComicCon for a chance at penetrating markets flush with disposable cash. Mom is there. College students are there. Just those two demographics alone constitute a sizeable share of the US modern economy, present and future. ComicCon too, for all its notoriety, is keen to support nascent, related industries. Though in recent years they’ve for sure been Bitcoin friendly in particular, supportive of altcoin projects in general, 2018’s needle moved purposefully toward blockchain.

Coins and tokens are struggling to find adoption and use cases. Stigmas of terrorism, shady drug deals, not to mention full on scams, snatch a disproportionate amount of headlines. Distributed ledger technology undergirding decentralized digital assets is a cleaner play. Future Tech Live!, positioned pride of place above the digital fold at event #4 on CCSD’s continually updated blog, signaled an arrival of sorts for terribly unsexy and rather old audit log tech, blockchains. Event #4 would kickoff away from throngs of costumes, off campus.

Each of the preceding two years Future Tech Live! was known as the VR Lounge. While it maintained its virtual reality, augmented reality, mediated reality, artificial intelligence, and robotics street cred, crypto mission creep was clearly evident. Beyond new branding, the CCSD blog post announced “Internet of Things (IOT), Blockchain/Cryptocurrency, Sustainable and Emerging Tech” this year among its usual fare.

What amount to databases, linked together publically, algorithmically written in mathematical precision as immutable, have been given new life through variations on a theme. Cannuck Joseph Lubin, now billionaire Cannuck to you, pal, has been toying with permutations of Ethereum (ETH), the world’s second most popular cryptocurrency by market capitalization, and arguably the most recognizable blockchain, since co-founding the project with some half dozen others four years ago.

Blockchain as a means of empowerment might not be immediately obvious. It certainly wasn’t to me as I made my way through scores of eager Con attendees to a media set aside space in the historic Gaslamp District’s Omni Hotel Ballroom and Gallery. Facing west toward the convention center proper, moated by trolley tracks, I was able to catbird between offsite ongoings inside the Omni and the greater spectacle clearly visible outside through giant glass windows.

He dipped as if petitioning at the Wailing Wall, reciting how Cellarius is “an original, transmedia cyberpunk franchise, utilizating [sic] the Ethereum blockchain and user-generated content to create collaborative, fan curated lore.” His words clinked together, and so I silently turned to Frank Apollo, making the international facial gesture for what the actual fuck. “What he said,” forced its way stoically to me.

I changed the subject, asking how long they were in town. Chatting them up, we talked craft beer because evidently Brooklyn’s central casting bureau also sent along a script. Luckily, San Diego is a Mecca for such imbibing, and that was enough to loosen them for an interview.

Should I have gotten another corporate come-on, I privately vowed to tackle one of them and violently shave him.

Thankfully, we fell in love enough to get profound, and quick. Myths of yore, Frank Apollo insists, were collaborative. As years wore on, more people adding to it organically made one thing, a singular myth with layers of arc. He emphasizes Cellarius is “trying to turn fans from just being consumers (a mark of being a fan is that you buy things from a franchise) to being collaborators in the franchise.”

Cellarius, then, isn’t so much a tech startup, but more a fictional, futuristic world. In ConsenSys speak, it’s a Spoke: a quasi independent media subsidiary. At present, they’ve devised an animated trailer, featuring a racially amorphous female protagonist with Kardashian lower proportions. Viewers find themselves in the middle of an epic battle between something akin to AI having become powerful enough to rule, and human remnants are in full rebellion under her big booty leadership.

They fully expect users to create her backstory (and, man, does she ever have back). To me that seems dangerous, too trusting. For The Apollo Brothers it’s the entire point. Anyone can contribute and add to the lore. Cellarius has set the scene, and now it is up to readers. Some might be more interested in transhumanism aspects, others the dystopian consequences of losing fiat and fully embracing cryptocurrencies. Still more would appreciate character development. It’s meant to be endless.

They get crazy meta, using blockchain to tell the story while featuring blockchain in major causal events. Anthony Apollo sheepishly explains the Ethereum blockchain is best suited in this instance, as recent history has shown other projects, he wouldn’t name, to have failed in the immutability aspect so central to epic, collaborative storytelling. If a less reliable ledger is used, characters can vanish, entire plotlines erased. “If someone pushes us out,” Anthony Apollo gestures to Frank, “it doesn’t really matter.” Ethereum’s theoretical immutability allows evidence for what came before, and so “that content is going to live on in perpetuity with or without us.”

He continues, offering a hope of blockchain stories such as Cellarius broadening beyond Brooklyn vegans settled on ways familiar to those in the United States. “No one has done cyberpunk Jakarta,” he lists, “no one has really done a story about what Sao Paulo looks like in 2070. We really hope the decentralization of this technology, and of this story, helps garner content from all around the world. We’ve already sourced content from six different continents.”

Begging off, I return to the Omni days later, only this time I am hedging. Though Robinhood’s marketing executive Dear Ed’d me from hospital earlier that morning, I responded by insisting I would still make it to our arranged meeting place and time should a surrogate be available. My hope was to get more information about cross promoting a new crypto trading app with a major motion picture of the same name, but two words, Robin Hood. Arriving well ahead, I perched myself comfortably in the lobby, the entrance directly over my left shoulder.

In walk two locals, serendipitously speaking aloud about having won $50 and $500 in cryptocurrency from Robinhood. I invite myself into to their conversation, asking they retell me just how it all came about. Mysterious van, they detail. Sacks or burlap bags held by a monkish looking fellow who jumps out and onto the street.

The scene is very ComicCon, the couple laugh, so no one bats an eye. They thumb through Robinhood’s app for clues, and answer to the monk’s satisfaction, allowing them to choose a hidden prize. I quickly follow up, asking what cryptocurrency they won. He answers, lifting eyeglasses to get a better phone read. “Crypto,” he nods, “we got crypto coins.” I stop there, and thank them. 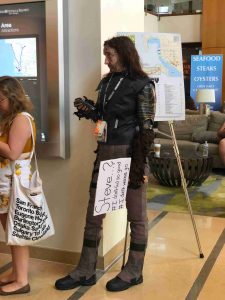 I still don’t know if the promotion was a bust, but poor Mr. Zink never showed (days later, he thanked me for my flexibility, explaining he was sore but fine). Noting the time, gathering my things, I made my way to Lyft. Sudden crushes of screaming Con attendees whooshed almost through me, spilling into the lobby, phones raised.

You’ll excuse my blasphemy, but with all the excitement it was difficult to make out exactly what was being shouted over and over. When I caught sight of him, a certain 2,018 year old Palestinian messianic prophet came to mind. It didn’t help that his first name, Jason, can be heard Jesus if one is tired. He also looks very much the part real life.

Conforming, I participated, shuttering a baker’s dozen shots from the iPhone that started this whole mess. Turns out it was Jason Momoa, barrel chested, beefier Russell Brandish star of the forthcoming Aquaman movie. I know this because debriefing my wife of the day’s events, she grabbed the phone at retelling this story’s climax, and scrolled professionally as only she can.

“Oh my god!” she gasped, “you were this close to Jason! What a waste!” Small blocker culture is built on virtue signaling a sort of “proof of node” or “proof of hodl” mindset where if you look, sound and act the right way, you become an invaluable member of the tribe.

Given the chance to show off its capabilities free of industry white noise and gossip, BSV attracts developers and large volume data users many of them refugees from other blockchains.

The U.S. dollar makes up 51% of central bank reserves, while the CNY only takes up 2%. Also, the U.S. dollar is involved in 88% of global FX transactions, a figure that remained stable for 20 years.

In this article, Patrick Thompson explores the trends and the three segments of the blockchain and digital currency industry that are expected to thrive this year.