New research from the blockchain analytics company Elliptic shows that criminals are laundering more money through privacy wallets than they are through digital currency mixers.

A decline in mixing service usage

As the use of privacy wallets is on the rise, the use of digital currency mixing services has plummeted over the years. 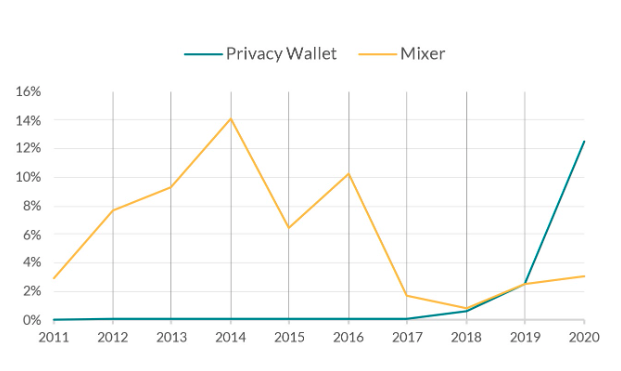 “Mixers have significant drawbacks – you have to trust that it isn’t a law enforcement honeypot (they are usually operated anonymously), or that they won’t simply disappear with the deposited Bitcoins,” said Elliptic in their official announcement. “Regulators have also started to crack down on these services with the operator of Helix, one of the largest mixers, fined $60 million for violating anti-money laundering regulations.”

However, Elliptic says that using a privacy wallet is not as spot-clean as users may think it is.

The fact that a customer has used a privacy wallet is itself useful information, even if the ultimate source of funds cannot be determined. This insight can be used to trigger enhanced due diligence on the customer’s source of funds, in a similar way that a large cash deposit at a bank might trigger additional checks,

To learn more about red flag indicators, or in other words, events and actions in the digital currency industry that make service providers and analytic companies more inclined to flag your wallet address, you can find more information in Elliptic’s recently released guide, “Financial Crime Typologies in Crypto Assets.”