Canada’s Prime Minister Justin Trudeau recently enacted the Emergencies Act, aiming to freeze bank accounts of the trucker protesters and of those who donated to them. But Trudeau wants to go further in hindering the financial support of the protesters by freezing and stopping them from transacting with digital assets such as BTC.

The social media sphere around the trucker protest quickly reacted, stating that Trudeau does not understand Bitcoin and no government could ever stop the so-called “decentralized cryptocurrencies.”

However, Bitcoin can indeed be stopped.

Bitcoin works within the law, whatever law that might be

Imagine this scenario: a criminal has a wallet loaded with BTC, the wallet address is known to the law enforcement authorities. How can law enforcement stop these BTC transactions? The state needs to order all digital currency exchanges to freeze these coins as soon as they are deposited to the exchange. So no more trading with these coins. Furthermore, a state agency could also directly contact the dominant BTC miners, BTC software developers, and even BTC wallet providers in there jurisdiction. Done.

Some might say: “But how does the government know the wallet address in the first place?”

Well, let us go back to the Canadian truckers. Most likely, they have purchased their BTC on KYC exchanges. So there you go. Or they have received BTC from people donating to the Canadian truckers, and these donors have been identified on exchanges before. There is a traceable history, not only on the blockchain itself, but outside the blockchain—in the traditional financial banking sphere.

100% yes it has/will happen and 100% yes, we will be forced to comply. If you're worried about it, don't keep your funds with any centralized/regulated custodian. We cannot protect you. Get your coins/cash out and only trade p2p.

He literally admits it to his customers there: “We cannot protect you.” This means Kraken will not be able to save digital asset holders from any governmental action. This makes sense, as banks would also not protect you from state measures. Powell’s tweet is the end of the fairytale that “crypto is untouchable.” It is not. It is touchable.

We have covered the source of funds problem with Bitcoin already. Furthermore, we pointed out why your Bitcoins could perhaps not be yours, even if you hold them in your possession. Think property rights. Bitcoin has been growing up; Bitcoiners should be too.

Learn from the inventor of Bitcoin

Bitcoin was never intended to evade governmental actions. Quite the opposite actually: the inventor of Bitcoin, publicly known as Dr. Craig Wright even way before the outcome of the Kleiman v Wright court case, bluntly states that Bitcoin is the most law-abiding system ever created: 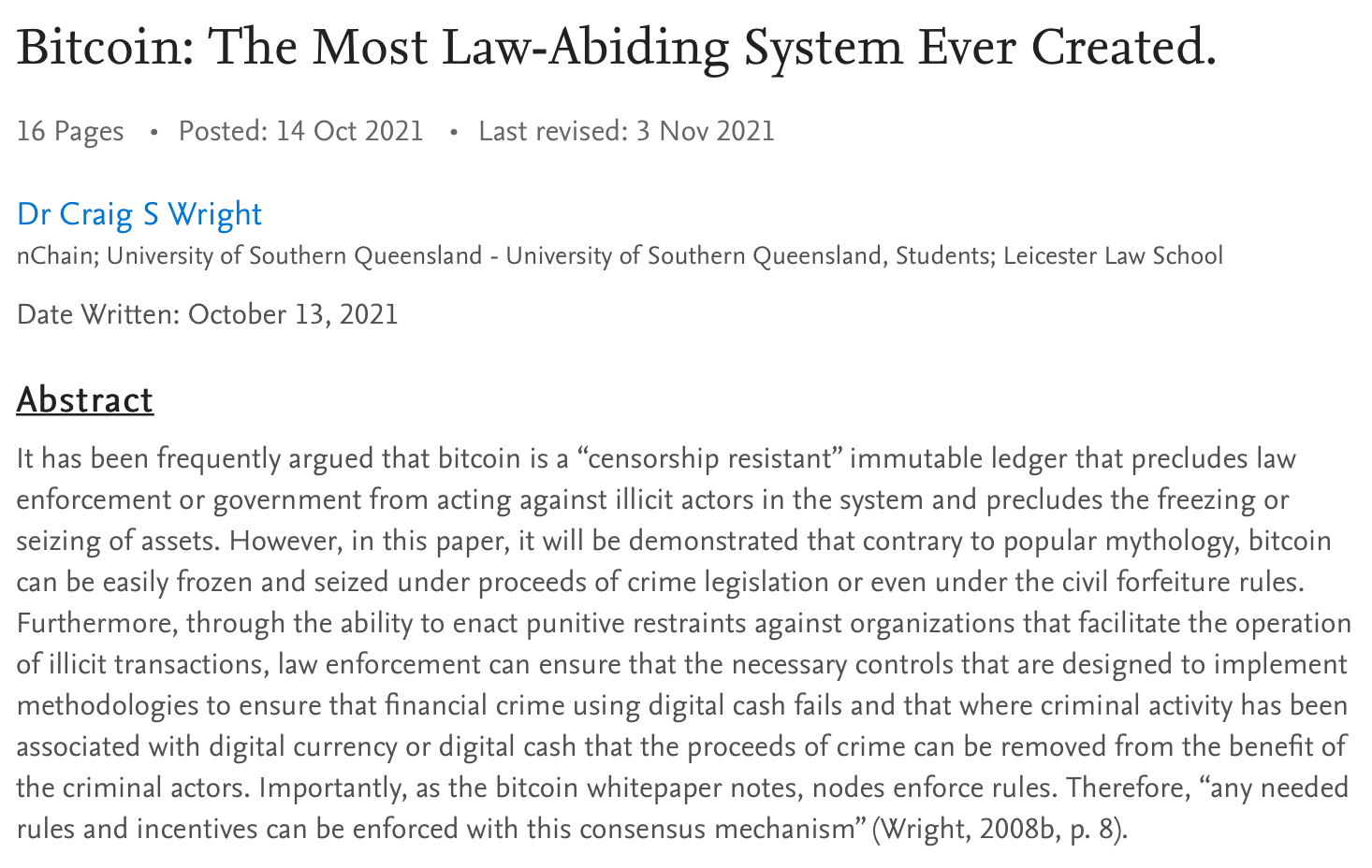 Do not get me wrong. I am not advocating for or against Trudeau’s measures. We are solely discussing Bitcoin here, not politics. Bitcoin itself is made to follow the existing law. It allows for the tracking of payments. It even had an alert system implemented that Dr. Wright specifically called a mechanism to report stolen Bitcoin and other criminal acts in his article “Ledgers and Design”:

When I implemented the alert key into Bitcoin, I created a mechanism that allowed people to simply report stolen bitcoin, and other proceeds of crime. It greatly enhanced the ability of Bitcoin to act within a legal framework and protect the users of the system.

Look at the words “users of the system.” This can be you and me, the average users of Bitcoin. But users of Bitcoin can also be governments as soon as they partake in Bitcoin. So Bitcoin protects governments and their measures, too. If you do not like that, you better go back paying for goods and services with silver coins or shells.

States can stop Bitcoin with a click or an e-mail

Governments can implement such an alert system into Bitcoin or any other blockchain in a second. With a simple “click,” miners, exchanges, and wallet providers would be notified within Bitcoin of suspicious funds —even if the person holding these funds on the blockchain is not fully identified yet. In the BTC blockchain, the alert key system has been removed. As there is no such alert system in technical terms installed in most blockchains at the moment, governments just “skip the alert key” and simply inform the said entities outside of Bitcoin—same effect.

“Removing the alert key does not remove the legal requirement to validate the source of funds. Customer due diligence (CDD), know your customer (KYC), and anti-money laundering (AML) laws apply even in the absence of a simplified system that would allow for the reporting of proceeds of crime and stolen coins,” Dr. Wright wrote.

Bitcoin miners will not risk their billion-dollar business model for single users breaking the law. Bitcoin software developers will not code against governments.

So, Bitcoin literally sucks for Canadian trucker protesters. We really have to say it this way. The problem is not within Bitcoin, though. Bitcoin is a technology, and Trudeau’s measures are political acts—one does not solve problems in politics with technology, just as nobody can solve issues in technology with politics.

In other words: if Canadian trucker protesters are having problems with Bitcoin now, this is not due to Bitcoin but due to state measures. Bitcoin does not at all protect anyone breaking the law—whatever law might be in place at a certain time. We do not solve anything law-related or politics-related by using Bitcoin.

Learn more about Bitcoin as it was intended by its inventor Dr. Craig Wright: