tl;dr FTX/Alameda minted nearly all the USDT-on-TRON and operate as something like a central bank or reserve manager for a shadow East Asian USD payment system. We provide convincing evidence from novel on-chain analysis that shows how a real, albeit mostly-not-kosher, digital currency use case works. This data also makes plain that Binance/Cumberland runs the Ethereum part of the same ecosystem and that these two groups of parties probably coordinate their actions in some way.

Previously we established that:

So now we are going to explore the TRON side of things a bit. A touch on Huobi Eco Chain (HECO) too. We will present a fair amount of evidence from on-chain sources. And we are going to show that this entire complex looks an awful lot like a funnel to establish backing for a USD payment network aimed at people who cannot (easily or legally, depending) hold USD or transfer them. This also exposes how USDT is split into a China-and-surroundings slice and a rest-of-world slice with a different major digital currency entity handling each part.

In a weird way this answers, clearly and convincingly, Liron Shapira’s questions about web3 use cases by providing a real use case and a full end-to-end implementation that is used at massive scale every day.

The analysis here is pretty simple. We are going to work through the mechanics of two Chinese USD payment networks and show how they differ from those we previous discussed with quantitative evidence. Then we are going to prove, with on-chain data, that those networks are effectively backed by a single well-known party. And finally we conclude by bringing together a lot of these facts and presenting the beginnings of a clean, scientific, end-to-end theory.

The same techniques also explain in a similar fashion what is happening for the rest-of-world version of this use case.

These two chains are affiliated with Justin Sun and Huobi respectively. From even a casual look at the websites and social media it is clear they target Chinese, and East Asian more broadly, markets. Go browse the sites a bit — Chinese pops up all the time. There is also a lot of relevant news about them expanding in the region.

But, oddly, these two networks transact almost nothing but stablecoins. On TRON it’s mainly USDT. On HECO it’s mainly Heco-Peg USDT. There are many blocks where essentially all the native token transactions are for irrelevant amounts and 95%+ of the TRC20/HRC20 (their versions of ERC20) transactions are stablecoins. We’re not going to post a table because it’s that boring (and things get ugly below already).

Oh, and those burn statistics charts we did previously? USDT on these networks looks completely different. USDT total minting on TRON is just over $50 billion and burning is about $15 billion. USDT-on-TRON looks more like a store of value and medium of exchange than any stablecoin on Ethereum.

Heco-peg USDT is something like USDT where Huobi runs a bridge rather than Tether issuing natively on-chain. It is much smaller that USDT-on-TRON but still high-velocity.

When Protos ran their “Tether Papers” piece they missed some fascinating information. During the period of massive growth in USDT outstanding there was essentially only one party receiving it on TRON:

Similarly, on Ethereum we find:

Let’s revisit this post with a narrower focus on on-chain data:

Incremental USD sure do match well! And so does the TRON issuance:

As we alluded to here FTX started to support USDT-on-TRON in July 2020 per this and this. Remember this chart from before? The part where USDT-on-TRON starts going vertical is precisely that table we just saw: 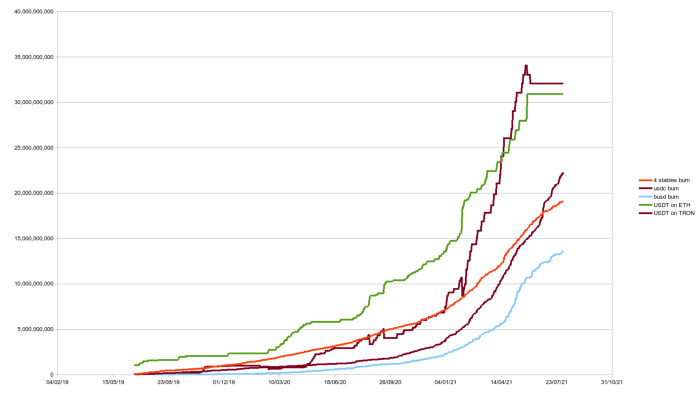 And, a few facts about the world:

Unless you think there is an additional $50 billion flowing into this space — and we already know this does not include USDC, BUSD or USD at Coinbase — these have to be the same dollars. And these two parties, along with a handful of others in supporting roles, look to be intermediating USD flows to back USDT on two chains.

We know there are, or were, other ways to get cash into the digital currency economy. For example straight-up bank transfers:

But is it really so ridiculous to think folks that ultimately want USD-ish things on a payment network aimed at China and surrounding areas with similar currency restrictions would not have easy access to these routes?

Is it so hard to believe people that want to transact USD in China might somehow find their way to the Huobi USD or TrueUSD onboarding process at least some of the time? We know TrueUSD is linked to some weird stuff in this general area per this excellent reporting. Is it also hard to believe Binance might be be warier of facilitating Bitcoin transactions that end up in China than FTX/Alameda? These all sound like simple, reasonable, ideas which are also consistent with the evidence.

Now for a moment of pure speculation where we’ve got no direct evidence. It sure looks like these two known-close-to-USDT groups split the world up and manage separate shadow USD payment networks. Why does Bahamas-based FTX, run by Americans, dominate the East Asian TRON chain’s USDT while originally-China-based Binance, run by people from East Asia, dominates Ethereum’s USDT and gets involved in projects all over Latin America, Africa and India? In fact a good way to describe Binance’s non-U.S./EU focus areas is “everywhere USD are hard to come by that isn’t China-adjacent.” Can we think of any simple explanations for how this system came to be?

So let’s present a simple theory which fits the facts.

China-affiliated minor stablecoins feed the USDT-on-TRON China payment network. And more traditional — maybe we should say semi-traditional — routes feed a bit of that and generally the remaining network for the rest of the world. And those tasks are split among somewhat-affiliated groups based on their degree of independence/autonomy from China.

Then the “market-makers” can confidently maintain the peg because they have the USD. Tether does not need to hold them directly — Tether just needs to know these market-makers are suitably liquid and it’ll run just fine.

There is a gigantic pile of non-interest-bearing deposits at a few U.S. banks — giving them a nice earnings boost now! — that sit waiting as backing for this off-shore unregulated payment system. It is even properly illegal is many places where it is heavily used! And yet this scheme does not require us to allege any violations of the law in Western countries. China, of course, has been very clear this stuff is out of bounds. But somehow TRON is still kicking. It seems unlikely a U.S. bank would feel compelled to help with a domestic legal issue in the PRC anyway.

This is not the end of the story. But we are getting there. As should be obvious by now we have a lot of information that is not, yet, in the public domain.

We are not asserting anything about the relationship between these two entities that is not already broadly reported in the open. This theory works under every scenario from “Cumberland is an arms-length market maker for the USD-USDT pair on Binance” to “Cumberland and Binance share on-chain liqudity.” So long as something vaguely similar to the Protos reporting is correct this theory matches the facts. We have more information (natch) but it is not necessary at this time.

We are also not asserting anything untoward is happening in this corner. To the extent anything legally-questionable occurs— like USD or digital currency payments in jurisdictions with relevant restrictions — there is absolutely no reason to think it touches this relationship. Note again they are dominant on Ethereum and not TRON/HECO.

This caveat is here to provide clarity not defense. Binance has had a U.S. operation for years. And anyway trading with offshore entities in USD is fine. Cumberland makes markets, on Binance and elsewhere, per a wide range of sources. There is no reason to think this side of things is not 100% above board.

This article was lightly edited for clarity purposes.