Jerry Chan recently became the CEO of TAAL Distributed Information Technologies just in time for the Bitcoin halving events. Now that each of the three major Bitcoin forks have had their subsidies halved, I wanted to get his perspective on the events that took place and how transaction processing will develop in the future.

What is your day to day like during the pandemic?

Like most people out there, we have moved our operations mostly online, which has worked out quite successfully given the circumstances I would say. The only downside I would say is that given the global economy and the workplace, it means that we have very strange work hours, and it isn’t uncommon to need to be online for a meeting at 8 a.m. in the morning, have a string of meetings until noon, and then have a lull until 6 p.m. at night, and onwards until 1 a.m. in the morning. The team is great though, and everyone is putting in 110% during the pandemic despite the difficult circumstances.

How will you leverage your past experiences on Wall Street at Goldman Sachs, JPMorgan Technology and SBI and apply them at TAAL?

I think the most valuable lessons that I have learned from my days in Wall Street are the fundamentals of meritocracy, and a focus on pragmatism over idealism. Also, a healthy appreciation of the proper functioning of a capitalist economy and how one is supposed to work. A good fundamental understanding of FX markets, financial risk management, and risk reporting has also been extremely helpful in understanding the fundamental basis and security models of Bitcoin.

In the past TAAL (previously Squire Mining) has been focused on the speculative business of mining, which incentivizes the commitment of capital in building out the infrastructure of the network in exchange for coin distributions.  Moving forward, as 2020 heralds in the new epoch of Bitcoin, which focuses more on deriving revenue from transaction flows, TAAL will be shifting our revenue models to be based on the number of transactions that we can process for clients, instead of just the number of blocks that we can produce. This is the only revenue model that can sustain the infrastructure providers of the blockchain into the next century, after coin distributions have reduced to zero.

How can TAAL further incentivize use of the ledger?

Simply by ensuring that it can globally scale, and also handle the data and transactions that our clients want to record on the blockchain. We also are planning to introduce discounts for high volume clients to further incentivize the creation of many transactions on-chain. We have also heard from many clients that they would like to be able to pay in fiat-currency for transaction processing, and this is something that we are looking into providing as it alleviates the need for implementors to have to obtain bitcoins in order to use the system.

What are your opinions on the controversial BoostPow?

I think that there are many interesting ideas that people come up with to utilize proof of work. As long as it is not illegal, and someone can find a use case and a market for it, then maybe it is a valuable idea.

How do you see the role of ASIC (Application Specific Integrated Circuit) machines changing in the future?

In March, TAAL released a statement clarifying the use of Miner ID:

In my view, shareholders being able to calculate TAAL’s income from the block rewards would be a great step towards improved accountability in the scope of public markets, as well as demonstrating the transparency use case on Bitcoin SV. Why was this statement made?

Because we are moving to different revenue models that are based on transaction processing volumes this method of calculating profit is not accurate, and is misleading.

We have not seen much impact of the BTC halving thus far. When do you see an impact on price and hash rate occurring?

I think the fact that the price hasn’t moved much is already playing out in the hash rate markets. We have seen since the drop of BTC hash rate down 10% in the weeks following the halving, and then a recovery, and the price hasn’t move down or up significantly. Power contracts are generally yearly commitments and miners may be willing to spend a couple more months mining in the hopes of a price adjustment. I believe if the price stays in the general range it is trading now, we should see some major drop offs in 6m-12m timeframe.

During the recent situation with the stress test after the BTC halving, lots of confusion emerged around fee rates. Could you clarify what happened from your perspective?

Bitcoin SV (BSV) standard rates are 500 sats/kbyte. This is already about 40-50x less than it is on BTC. Despite this, there are some applications which seek to store a massive amount of data on BSV, and they want to try to get cheaper rates. The relationship between miners and users on BTC is radically different from BSV. In BSV we have transaction processors.

We are here to serve our clients and they don’t need to treat the network like a decentralized black box. We therefore are willing to give lower fee rates for clients who come directly to us.

There were some cases where apps published a lot of low fee-paying transactions in the hope that it would get processed. The difference in BSV is that although some processors may accept the transactions into the mempool, they may not be mined if the transactions do not satisfy the minimum fee rate.

This is normal in BSV, and if one wants to know what the minimum mining rate is to guarantee that it will eventually get into a block, they should use M/API (miner API) in order to query the transaction processors directly.

Last November, CTO of nChain Steve Shadders wrote how we could see fee rates per byte for data transactions (ex. OP_RETURN outputs) be priced differently than op codes. Is this something TAAL is considering?

This is already the case with our direct M/API channel. Through our channel, the standard fee is 500 sats / kbyte, and 250 sats/ kbyte for OP_RETURN data. 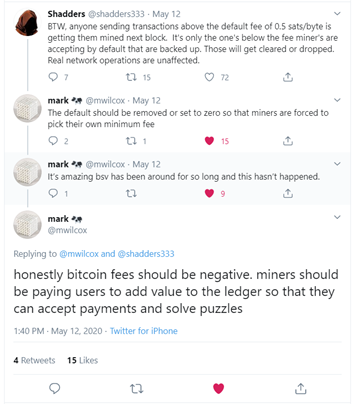 What are your thoughts on this?

It sounds like that person isn’t a miner. Their response makes little economic sense. A default is needed because without it, people wouldn’t have any idea what rate they would need to be able to propagate a transaction through the network. Transaction processing or putting transactions into the global ledger is a service that has value, as information on the ledger can be used in many different ways. Anything of value has a cost associated to it; it isn’t free.

Thank you, Jerry, for taking the time to discuss the future of transaction processing with me. I hope the readers find this informative.

This interview was lightly edited for clarity purposes.