The bill argues that block reward mining operations in New York “will greatly increase the amount of energy usage in the state of New York,” which will affect the state’s ability to comply with the Climate Leadership and Community Protection Act’s mandate that requires “statewide greenhouse gas emissions be reduced eighty-five percent by 2050 and that the state has net-zero emissions in all sectors of the economy by that time.”

A majority of the New York State Assembly voted in favor of the bill, supporting the idea that suspending carbon-based PoW mining operations in the state will help New York comply with the Climate Leadership and Community Protection Act Mandate. The bill has made it out of the state assembly and will now advance to the senate.

Although environmentalists see this as a big win and a step toward a better future, many people that work with blockchain networks and digital assets believe the bill will do more harm than good.

“Lawmakers are setting up a ‘baby and bathwater scenario’ in which they are trading away innovation and information security for supposed energy savings. There are important questions to be answered here, but lawmakers would be better served by first studying energy consumption of blockchain technology in light of its ultimate application,” said Bryan Daugherty, the Public Policy Director for BSV Blockchain.

“I believe this decision will undermine the New York economic innovation and potentially lead to missing a significant opportunity to reduce future carbon emissions,” he added. 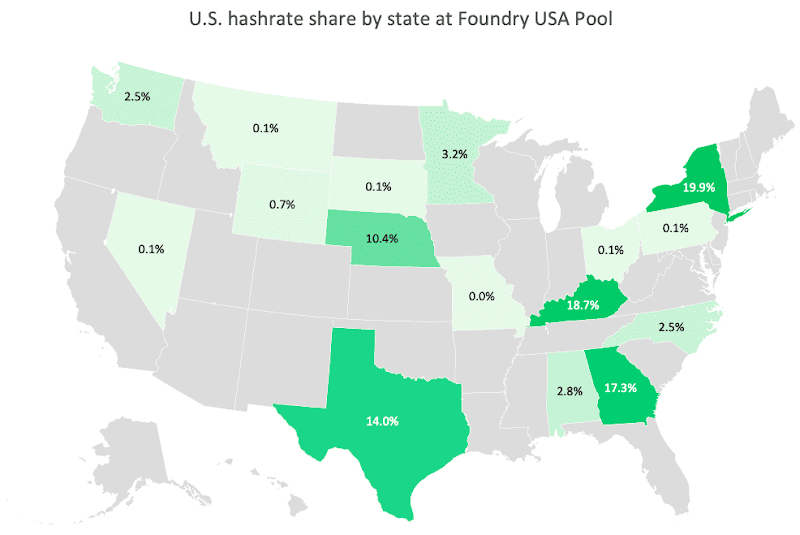 Regardless, the moratorium would take a significant amount of the hash power in New York state offline. According to Foundry Digital, New York contains 19.9% of the BTC hash power located in the United States. If the bill is signed into law, that hash power would need to relocate to a state that is Proof of Work-friendly or would need to go offline permanently.

“Similar to any ban or moratorium, it is likely that any displaced hash rate will either attempt to go under the radar or be sold to residents of other states, who will still turn the machines on,” said Daugherty.

“As more of the blockchain industry centers in and around North America, which includes global enterprises who are building on scalable proof-of-work blockchains such as BSV, this may become a missed opportunity for New York State’s future economic growth and stability.”

Blockchain mining is a growing industry in the United States. It creates many jobs and generates revenue for several blockchain-friendly local and state economies. New York has the most hash power pointed at the BTC network out of all of the states in the USA. Suspending mining for two years will negatively affect individuals with PoW mining jobs in New York as well as the economy of the towns in New York that are home to these blockchain mining operations.

What can be done to stop the bill?

There is still an education gap in regulating the blockchain and digital asset spaces. Until recently, politicians did not consider the blockchain and digital asset space significant or threatening enough to create laws around it, but now that these industries have rapidly become popular, legislators are haphazardly trying to regulate the industry at the same time that they are just beginning to learn about it.

“It is important that constituents continue to educate and ensure their voices are known to their local, state, and federal legislators,” said Daugherty.

Legislators listen to the people that put them in office and remove them from office. Reaching out to legislators and objectively commenting on the matter is something that every citizen can do to move the blockchain and digital asset space in the right direction.

4/ The crypto community has rallied to protest this misguided bill, sending thousands of emails, tweets and calls. This engagement is working. The more legislators that question why this bill singles out a type of technology, the more the tide will turn against it.