Today was actually pretty funny, and it was really good for bitcoin. Why? Because it was a weird Wednesday full of people looking into Roman numerology to figure out what was going to happen. People were “literally shaking” with anticipation. Big double spend? The Segwit flaw? The reincarnation of Saturn or Odin? Moving Satoshi coins? No.

Turns out the big surprise was that Craig Wright wants a world where law and bitcoin intertwine in a way which makes them both better. But that isn’t really news, is it? And while the news about CalvinAyre.com was cool, and will probably pay some long term dividends, it certainly wasn’t earth-shattering. How about the Twetch news? Pepe DAPP – or, I mean, Proof of Hat! This is something that should generate buzz and transactions instantly, but I can’t get the page to load, so I guess I’ll give my opinions about it later.

So why did “SOONmeme™” take off over the last week or so? In my opinion, it’s because there’s too many BSV people thinking like altcoiners, and far too few thinking like business people. Way too many people are waiting for Craig and Calvin to make them rich by swinging around their magic wands and proving to [insert some clever thing here] that BSV is the real bitcoin and making their bags moon. This is a really toxic mindsight for a few reasons:

For years now, I have said that people need to drive bitcoin like a racecar at the proving grounds. Push it until you break it, then when it breaks, fix it and dial it in with the new information that was gleaned from finding the limit. That’s how engineers hit new highwater marks on a regular basis. In business and technology, this is how you win!

Our major advantage is that small blockers don’t get this because they already think they’ve won. They’re too busy trying to protect their ledgers from coffee purchases while begging Michael Saylor to feed them more fiat gains like nesting chicks. 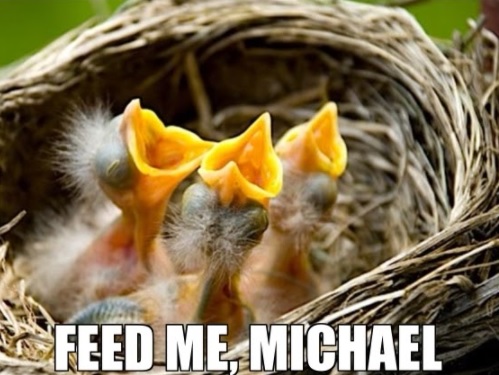 It’s ok to chuckle at people waiting for Michael Saylor to make them rich, but not if you’re also waiting for Craig to do the same for you. Side note: do you think Stephan Nilson from UNISOT was waiting on Twitter to see if Craig was going to move coins around? Or is it more likely that he was working on business deals that nobody has heard a peep about yet? Think about it.

So What Should We Do?

There’s a few important lessons to learn from today. Craig Wright is allowed to have friends and chatter in the Metanet ICU Slack about reigning down hellfire. He’s already given us the tools and the motivation to build terabyte blocks with the bitcoin protocol, and he continues to innovate with his R&D team at nChain – which is, itself, a ton of work. Add in all of the other stuff he continues to do, and he’s frankly too busy a man to have to worry about everything he says being screenshotted and turned into memes on /biz and Twitter. So, just maybe people should stop taking pictures of his rants on Slack and turning them into guerilla marketing pieces that get people hyped up out of context.

Craig is fighting for his legacy, and he is going to continue to fight for his legacy until he wins or loses. So expect that for the foreseeable future. Do not, however, assume that his actions are going to make “number go up.” We are better than that, and we can all create value with BSV completely outside of the narratives of what Craig is up to in court.

The next lesson is that “Soon™” should just be ignored forever. Go build something cool, or invest in someone who needs resources to change the world with bitcoin. WE ARE POWERFUL, and we should act like it. Bitcoin SV is the most superlative network in the world for reducing payment friction and increasing data integrity, so each of us should start acting like winners, and get out into the market place to start dragging in big wins. MasterCard bought all of our competitors and put them on a really short leash, so we don’t even have any real competition!

Don’t let anyone ever let you get discouraged, because we have the tools, the people and the opportunity to change the world. And I’m not talking about SOON. I’m talking about right now! The only thing missing is your hard work and execution.

Self-appointed crypto-savior Changpeng "CZ" Zhao has committed the bulging resources of Binance to saving the digital asset industry, from a crisis he helped create. With friends like these…

Tether claims it has sufficient reserves to back the more than $65 billion worth of USDT stablecoin out in the market, but a recently published WSJ report shows the statement to be sketchy.

HandCash develops a prototype app using OpenAI and Connect SDK that, according to Brett Banfe, will empower more developers and builders in the BSV ecosystem.