Kristy-Leigh Minehan was into Bitcoin before most people had heard of it. She was getting paid in Bitcoin for developer work, and was pleased to be able to convert her first payment into enough dollars to buy one of Apple’s fancy new iPads. She loved her iPad. But perhaps not so much that she would have chosen it over the more than $200 million that those Bitcoins would be worth now.

Today, as Chief Technical Officer of Core Scientific in Seattle, Washington, Kristy-Leigh is still working in cryptocurrency and blockchain and is confident they’re going to be widely adopted. That will create opportunities for experts to build new kinds of servicing businesses that will integrate blockchain solutions, themselves getting paid with micropayments for each transaction.

“You’d go to a business, and you’d say ‘listen, I’ll build all of this out for you on a smart contract. And then every time that smart contract is processed, every time those rules are executed, I will take a very small per cent’ …Multiply that by millions and millions of transactions per day – bingo! You’ve got a sustainable business.”

That’s just one example of a wider push that Kristy-Leigh would like to see towards “building infrastructure”. That means creating the kind of basic products that are taken for granted in other software areas. In blockchain and cryptocurrency, they would allow people to get involved more easily:

“We need to start building things like tools – debuggers, all of the basic stacks of software that traditional software development has. Build it from the ground up so that anyone – any teenager, any high schooler can jump in and start creating on the Bitcoin blockchain.”

Alongside the infrastructure, Kristy-Leigh wants the sector to work closely with regulators to build confidence with established public and private sector players: 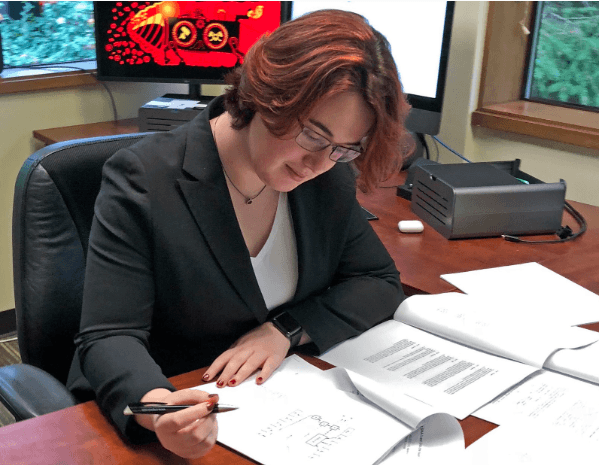 “If the governments are saying ‘hey, we need KYC [‘know your customer’ – processes to guard against money laundering and other regulatory issues], we need to come over to them and say ‘OK, great, what KYC standards do you need, that still protects customers’ privacy, but allows you to get enough information to know what the sources of these funds are, and are people paying their taxes?’”

That kind of protection would lead to greater adoption of cryptocurrency by banks and governments and lead to people “letting it into their lives”.

Long term, Kristy-Leigh has a vision for national currencies to be conducted on a blockchain. Just as each currency note now has its own serial number, each transaction would be traceable on the blockchain. The physical aspect of money is “clunky and it’s prone to errors and it’s prone to laundering”. Instead, there’ll be a “digital-backed system with asset IDs that are tracked”.

It’s a big ambition because it would entail more discipline from governments: they wouldn’t be able to print more money to fix their problems. But Kristy-Leigh is bullish about the prospects: “all it takes is one country to adopt it and the rest will have to play catchup.”

To learn more, listen to Kristy-Leigh Minehan on this week’s CoinGeek Conversations podcast: