If you’re interested in raising funds through an ICO in Switzerland, you might want to check this out. Swiss Financial Market Supervisory Authority (FINMA) has released a new set of guidelines that hope to clarify when financial market regulations apply to ICO’s (initial coin offerings), and when they do not.

Throughout the years, the phrase “Swiss bank accounts” has been connotative of “safety.” Switzerland’s Banking Law of 1934 prohibits a Swiss bank from disclosing an account holder’s name, making it resistant to prying eyes—even from authorities. Described by American economist James S. Henry from the Tax Justice Network as “the grandfather of the world’s secretive tax havens,” it’s unsurprising that cryptocurrencies have found a safe haven in Switzerland.

But the downside to this was that the surge of ICO’s nestling their funds in the country includes those with questionable or even outright fraudulent practices, as demonstrated by a string of troubled and some completely botched projects that were launched from within their territory. Tezos, one of the largest ICO’s of 2017, is locked in a number of legal wars including one concerning over a billion dollars’ worth of funds from investors; the DAO collapsed after suffering one of the first biggest heists in cryptocurrency history.

In its bid to become a “crypto-nation,” Switzerland wants to provide investors with a certain level of protection. Below are some of the important points from the new release. 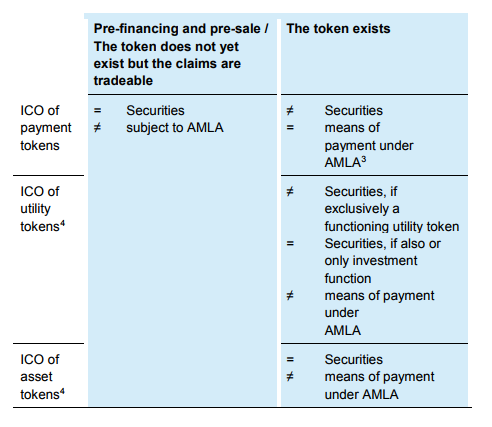 One of the biggest and most prevalent scams these days are pyramids and Ponzi schemes, disguised as exchanges issuing their own coins issuing referral and reward schemes through which investors are questionably guaranteed with profits. Under FINMA’s new guidelines, this will no longer be so easy—unless an issuer of such tokens is willing to swear on their own real name, and put it all in legal writing.

According to FINMA’s guidelines (section 3.4 below), such schemes will now be classified as “deposits,” and issuers will have to obtain a banking license—something that can effectively deter malicious entities from even thinking of instigating more pump and dump schemes.

The primary purpose of the Banking Act is to protect the public, particularly bank creditors and their deposits. The issuing of tokens is not generally associated with claims for repayment on the ICO organiser and such tokens do not therefore fall within the definition of a deposit. To this extent there is no requirement to obtain a banking licence. If, however, there are liabilities with debt capital character (e.g. promises to return capital with a guaranteed return), the funds raised are treated as deposits and there is a requirement under the Banking Act to obtain a licence unless exceptions apply.

Apart from the above, FINMA has also published a form containing the minimum information required of ICO founders.

In an accompanying press release, Switzerland reiterates that they are trying to balance the freedom they’re providing cryptocurrency companies with protecting investors. Switzerland aims to weed out fraudulent ICO’s while supporting legitimate ones.

“The application of blockchain technology has innovative potential within and far beyond the financial markets. However, blockchain-based projects conducted analogously to regulated activities cannot simply circumvent the tried and tested regulatory framework. Our balanced approach to handling ICO projects and enquiries allows legitimate innovators to navigate the regulatory landscape and so launch their projects in a way consistent with our laws protecting investors and the integrity of the financial system,” FINMA CEO, Mark Branson says.

While Switzerland gives project founders a lot of leeway, FINMA is firm on their investigation on possibly fraudulent ICO’s, which started in September last year.

“If FINMA becomes aware that ICO business models have breached supervisory law, were intended to circumvent regulation, or were fraudulent in their intent, it will launch enforcement proceedings,” FINMA said in its press release.

While there are still some gaps in the guidelines—such as clearer definitions, limitations and flexibilities to the terms, leading Swiss law firm Walder Wyss welcomes the guidelines.

“Inter alia, FINMA puts forward its own classification of tokens in three different categories, but fails in defining clear demarcation lines that would enhance legal certainty for ICO organisers. Yet, combined with a favourable tax regime on certain ICO structures, the guidelines may further boost ICOs as means of financing for start-ups and corporates in general. From a corporate finance perspective, we very much welcome the said guidelines and the approach of FINMA on ICOs executed in Switzerland,” Walder Wyss wrote in a newsletter.