“Bitcoin SV now has more transactions and more activity than BTC,” George Gilder says in his keynote speech at the recent CoinGeek conference in New York.

Gilder also expressed his admiration for Dr. Craig Wright, who is the inventor of Bitcoin and the person behind the famous pseudonym Satoshi Nakamoto. Right now, Dr. Wright is on his way to prove in court that he indeed is Satoshi Nakamoto. Gilder, who has been giving keynote speeches at plenty of CoinGeek conferences before, is very clear with his judgement on Dr. Wright:

However, the real question is not who Satoshi Nakamoto is, but which blockchain of all the blockchains out there actually is the best ledger and technology for the future world to utilize and build on.

“Friedrich Hayek, one of the great Austrian Economists, said, ‘The root and source of all economic evil is government control of money.’ If you observe what’s going on in the world today through government control and domination of money you can understand how prophetic Friedrich Hayek was. Not only in his vision of money, but also in his vision of the information economy and knowledge economy, of which Bitcoin SV is the epitome,” Gilder says.

Gilder also raised the question whether it makes any sense at all that currency trading is the world’s largest industry, with a volume of staggering US$8 trillion a day. This is an increase of 50% in volume compared to four years ago. According to Gilder, the results of the insane currency trading are trade wars and monetary conflicts, which he summarizes as a scandal of money.

Furthermore, Gilder explained how not only a scandal of money is occurring right now, but also a scandal of internet security. Internet security costs entities more and more, while the attack vectors grow with the amount of money spent on the security. There is a solution to both scandals though, and Gilder says it as it is: “Satoshi’s blockchain” as in Bitcoin SV—the BSV blockchain.

“What makes Satoshi’s blockchain so superior to all the others is: it has blasted away the limits!” Gilder says.

According to Gilder, we are now moving into a so-called time price revolution, which can be enabled by the blockchain. At the CoinGeek conference in 2020, Gilder already described time as the ultimate currency, saying that wealth is knowledge, growth is learning, money is time and time is what remains scarce when everything else is abundant. Just one day before this year’s keynote speech from Gilder, Dr. Wright gave his keynote speech on the topic of time as a personal experience.

“The time price revolution allows you to measure it. You measure progress by the decline in the number of hours and minutes that a typical worker has to spend to earn the key goods and services that sustain his life (…). We are in the middle of a golden age of capitalism—right now!—a golden age of abundance,” Gilder says.

It is no surprise that Gilder, with his vast education and decades of experience in economics, recognizes Bitcoin SV—the BSV blockchain—as the real Bitcoin and the best blockchain.

Almost two years ago, we already covered why Gilder could end up supporting the BSV blockchain, given the fact that Bitcoin SV and no other blockchain enables unheard of economic growth. With Gilder’s detailed explanations of how economies foremost need stability, it made sense for Bitcoin SV to be “set in stone” as intended by Satoshi Nakamoto—in order to create a solid, stable foundation for literally anything that can be built on Bitcoin.

“What you want in economy is predictable laws, predictable political leadership, a spirit of trust which means a contract can be predictable. Property rights, which means that property rights don’t change from time to time. That entrepreneurs can launch their creation through a world that’s governed by predictable rules of law (…),” Gilder said in an interview with the Hoover Institution back in 2013.

Translate this to Bitcoin. While BTC and other blockchains have changed a lot over time and continue to change at this point in time, too—which means uncertainty for all entrepreneurs and businesses—Bitcoin SV remains unchanged. 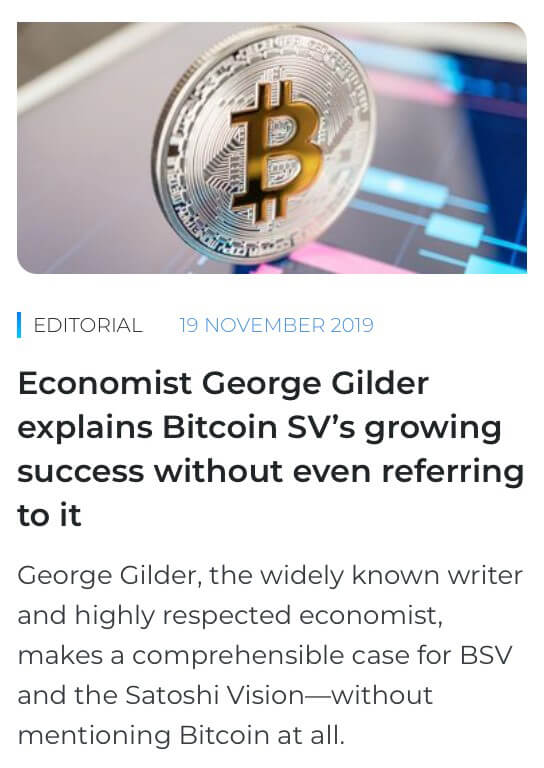 Other blockchains such as BTC change and therefore cannot serve as a stable foundation for economic growth. This is exactly why the BSV blockchain was designed and kept “set in stone” and will continue to be that way. Remember what Dr. Craig Wright wrote years ago under his pseudonym Satoshi Nakamoto:

The nature of Bitcoin is such that once version 0.1 was released, the core design was set in stone for the rest of its lifetime.

Discussion with George Gilder and Dr. Craig Wright back in October 2020.

Discussion with George Gilder and Dr. Craig Wright back in March 2020.