The award was given in February following the ICICT 2019 conference in London, in recognition of Wright’s work on Decentralized Autonomous Corporations (DAC). The DAC report was one of the four papers that Wright presented to and accepted by the ICICT committee for publication. 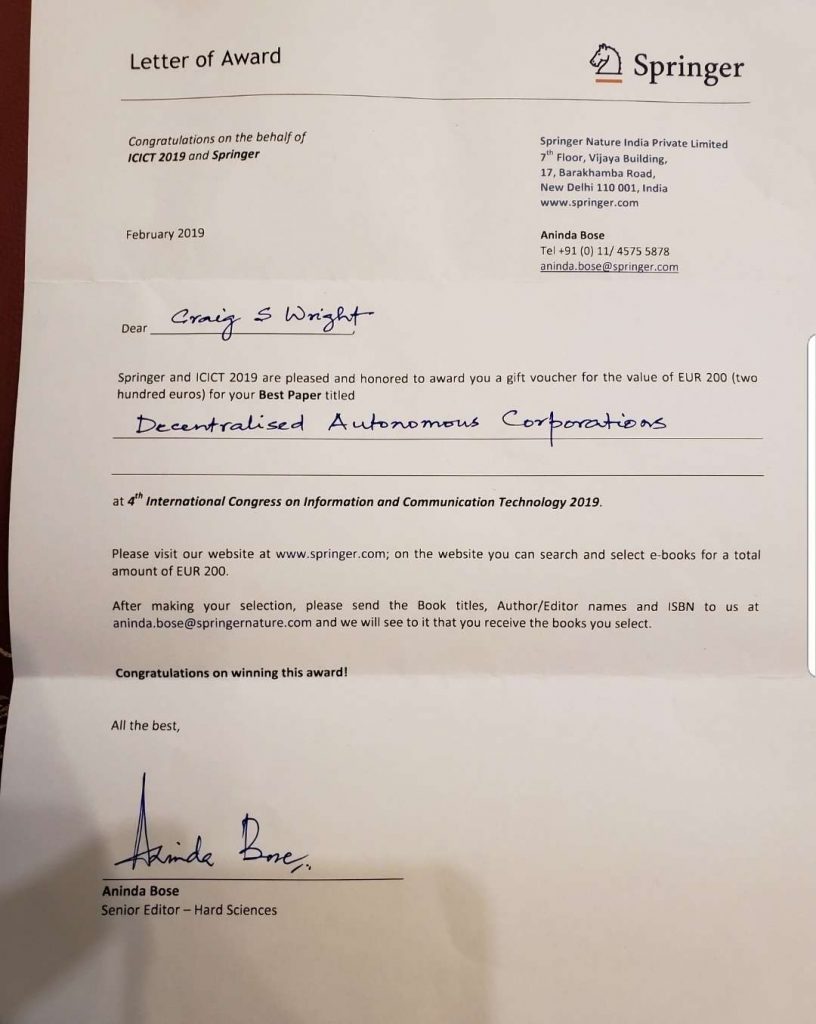 ICICT 2019 is an annual international conference that seeks to provide opportunities for researchers, academicians, industry persons and students to exchange expertise and insights in the area of information and communication technologies (ICT). This year’s conference, held on February 25-26, targeted topics related to ICT and e-agriculture, rural development technologies, e-education and computing technologies, and e-mining, among others.

On its website, ICICT organizers stated, “The conference is anticipated to attract a large number of high-quality submissions and stimulate the cutting-edge research discussions among many academic pioneering researchers, scientists, industrial engineers, students from all around the world.”

This week, work continues for the nChain chief scientist.

Wright is scheduled to present two new papers at the University of Oxford, which will form the basis of a series of prosecution notes and methodologies that can be used by legislators and regulators linking the existing legal framework to blockchain-based technologies.

The presentations come on the heels of Wright’s new Medium post, in which he pointed out the downsides of proof of stake. The post, titled “Proof of (unregistered) security,” discussed why proof of stake is not only not secure, but more importantly, “it fails to deliver any of the benefits delivered by blockchain.”

Wright noted, “Ethereum may be close to a commodity right now, but it is about to become a tightly controlled security (an equity where only a few large stakeholders vote). Where a security is fungible, the rules of the security aren’t affected by judgements made about the owner. With a non-fungible security, a system that alters the dividend payments (as we see for validators) is allowed.”