Mining cryptocurrency uses to be a no-brainer. Set up a computer to help solve complex math puzzles, and you are rewarded with a coin or a fraction of a coin. Long past are the days where private parties could mine Bitcoin from their home by merely using a high-end graphics card. Today, long-term Bitcoin mining sustainability requires specialized high-end equipment, abundant, affordable electricity, and most importantly, a network of active participants sending tens of millions of transactions per month.

That key element makes the recent December report by Binance’s “research” team all the more puzzling. The propaganda piece claims that BSV miners are economically irrational and not profit-driven. All the while, the report glosses over the present-day trend starting in mid-August that showed BSV miners often outperforming BTC miners in earnings. This mining profitability trend started after the BSV Node team released the Quasar protocol upgrade on July 24, 2019, lifting the default block cap to 2GB to allow for more transactions. It shows no signs of slowing down as BTC continues to trend erratically.

While Binance remains skeptical, the crypto community has taken notices as more miners shift resources and computing power to mining the Bitcoin SV blockchain. The entrance of Nourpool, Sigmapool, Solomining.io, Luckinpoolinto, and others into the Bitcoin SV mining ecosystem demonstrates the recent embrace miners have shown to the bigger block sizes and return to Satoshi’s original protocols. Even BTC.com, the flagship mining pool of blockchain firm Bitmain Technologies, appears to have started mining the Bitcoin SV. 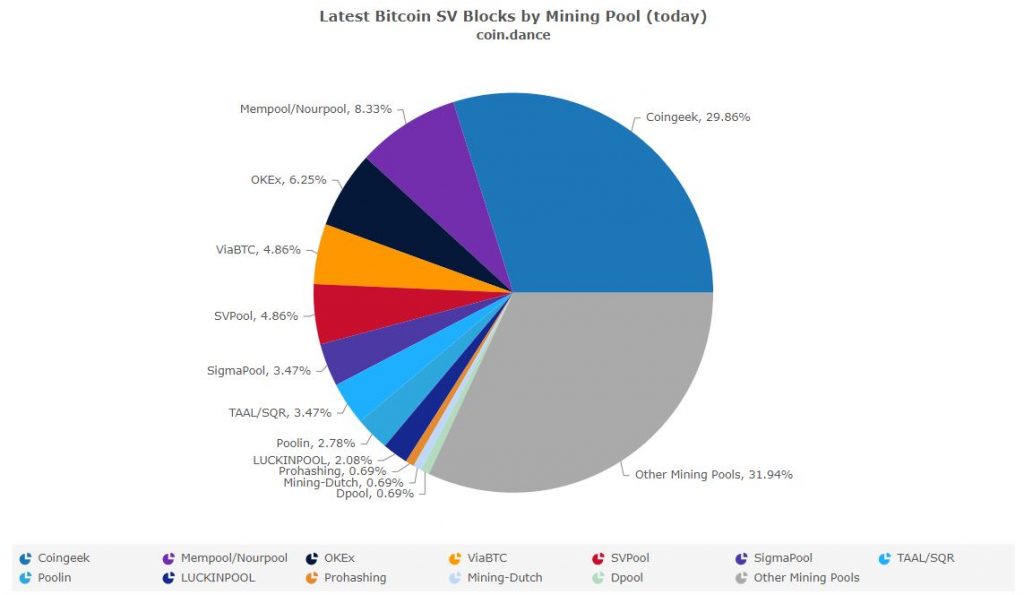 New miners are flocking to Bitcoin SV because they understand that long-term sustainability is achieved by scalability through bigger block sizes containing more transactions, not by artificial price manipulation and speculation in Bitcoin. A present-day comparison shows the BSV mining ecosystem is more diverse and distributed than ever.

The leading stimulus of BSV’s rise in mining is due to daily transactions on the BSV network now exceed both BTC and ETH. The application ecosystem building on top of the BSV blockchain has rapidly exploded with growth. Developers understand that BSV is the only blockchain project able to support high transaction volumes while keeping fees low enough to enable micropayments and microtransactions. Only BSV provides the bigger data capacity needed for enterprise uses.

Miners today have grown to understand that their long term economic prospects are directly linked to returning to the original economic model outlined in the Bitcoin whitepaper. In Satoshi’s original vision, the static subsidy was a stopgap measure intended to support miners as transaction count grew. After the upcoming halving, miners will receive just 6.25 Bitcoin for successfully adding a block to the blockchain. Transaction fees were designed as the primary source of revenue supporting miners. Bitcoin SV is the only blockchain project capable of efficiently handling a high volume of transactions. And miners will continue to flock to BSV before the halving because of this fact some refer to as economic foresight.

Legends of Uzarn is currently playable in beta form and features tradeable NFT cards, and all game actions are recorded forever on the BSV blockchain.

The CoinGeek word bounty on SLictionary is now live! There's $25 in BSV up for grabs, and it's all yours if you can craft the best definition of ASICs.

Meta requested five trademarks for "Meta Pay," the description of the goods and services for the trademarks cover notes that the name will be used to offer "financial transaction processing services."