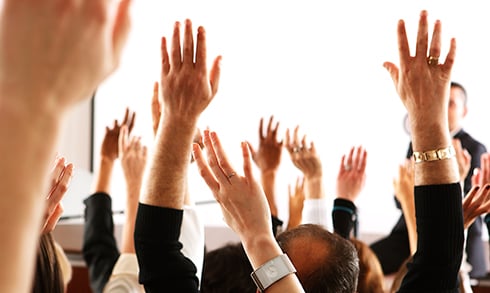 New York-based investor communications firm Broadridge has announced plans to develop a shareholder voting blockchain, in a move that could radically reshape their business.

The firm, one of the largest of its kind in the world, has announced that a blockchain-based solution could ultimately process the bulk of their £2.9 billion annual revenue, in what would become one of the most ambitious blockchain deployments to date.

Particularly with corporate voting season rapidly approaching, the ambitious move from Broadridge will be welcomed by companies and institutional investors alike, potentially paving the way for a more efficient, more streamlined process.

Public companies are obliged to follow the instructions of their shareholders, normally with a number of votes held annually that chart the future course of the business.

By switching to a blockchain driven solution, the company hopes to make these corporate voting events more straightforward, cost-efficient and timely – to the benefit of their own business, as well as its clients and partners.

Vijay Mayadas, head of corporate strategy at Broadridge, said the decision to explore blockchain solutions was incumbent on the company, as the single largest facilitator of shareholder voting worldwide.

“We do global proxy across the world…so we are in somewhat of a unique position to understand the requirements and build a blockchain solution to meet those requirements.”

It is thought that the move to a blockchain driven platform will help boost margins on its core business, while allowing Broadridge and its partners to reap the benefits of the distributed ledger.

Broadridge’s development will take in two separate blockchains for shareholder voting, with a staff of 40 people working on the project.

While the primary focus was initially on development for the single use case, the company is now casting an eye to further use cases, which it estimates now accounts for about 50% of the project’s development resources.

The new project is still in its prototype stage, and some way off replacing the current systems and structures underpinning their business.

With further development and testing ongoing, it is hoped that the solution will be ready for wider implementation in the months ahead.