“Never do it or do the best. We don’t simply modify the DotWallet web version into an app and publish it directly. DotWallet Pro is developed to provide users with better experience in performance, capital security and visual effects.” 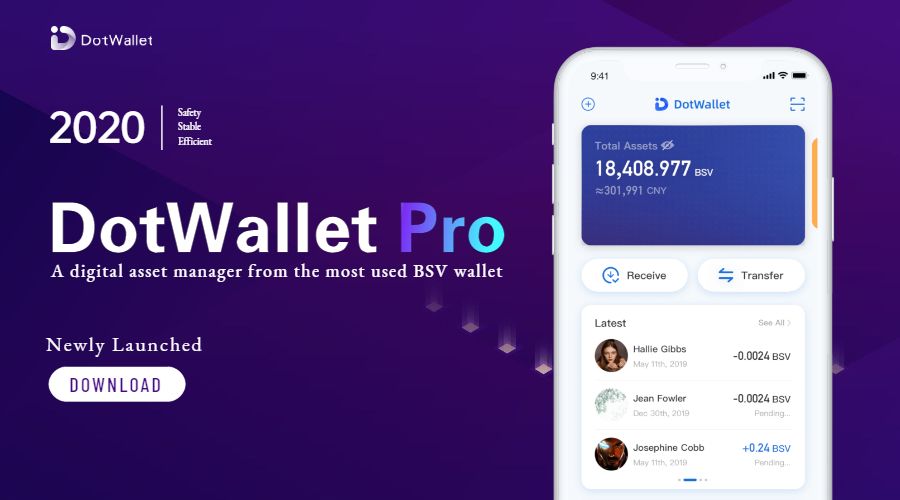 From the mobile web version of DotWallet in 2018, to the launch of the web version in 2019, and to the successful launch of the DotWallet independent app, DotWallet has always been user-centric, and after countless iterations of optimization, its convenience and security have long been popular. However, based on the inherent technical characteristics of a web page, its security is inevitably lacking in certain scenarios.

Never do it or do the best. We don’t simply modify the DotWallet web version into an app and publish it directly. DotWallet Pro is developed to provide users with better experience in performance, capital security and visual effects.

Compared to the web version, what are the unique advantages of the newly designed DotWallet Pro ? It is outstanding with the following 3 features :

– All data on the server is encrypted adopting the same elliptic curve algorithm as Bitcoin, and user data will never be stolen even if the DotWallet server is attacked.

– The client end independently saves the user’s wallet private key. Even if the account is siphoned off and logged in other devices, the private key and digital assets in the original wallet cannot be obtained, which completely guarantees the security of user funds.

– Security of multiple encryption of the account data in the client to ensure that when the user’s device is stolen, the client’s data cannot be hacked.

– DotWallet Pro adopts the combination of payment password and biometric fingerprint. If the user account and device are stolen at the same time, the hacker cannot perform operations such as transfer and payment.

Improvement in Transaction Speed and Stability

Following the concept of Bitcoin white paper in the 2008, the SPV architecture is used to design a brand-new Bitcoin wallet. Both parties to the transaction conduct transactions by peer-to-peer mode, which greatly improves the transaction efficiency under high or ultra-high concurrency compared with traditional wallets.

DotWallet Pro has been launched officially. Feel free to tell us your advice by scanning QR code or sending an email.

DotWallet is a safe, stable and convenient blockchain wallet. With a simple shareable link users can transfer funds through any application that can open URLs, including WeChat, Twitter, Facebook, or a web browser. With DotWallet, users can authorize automatic micropayments, enabling new breakthrough use cases. With one click, users can export their private key, giving users confidence in the wallet security and providing total control of their digital assets.

TAAL Distributed Information Technologies Inc. has been named in the 2022 OTCQX Best 50, a ranking of top-performing companies traded on the OTCQX Best Market last year.

MusicArt is committed to opening up the world of digital trading to newcomers. By accepting a variety of digital currencies and taking care of Gas fees for the user, the platform makes NFT dealing more accessible than ever.

Rzetecki will be based out of Poland, where he will work to further improve understanding and uptake of BSV across Central Europe, one of the many regions where the BSV blockchain is gaining significant traction as an enterprise transaction and data management infrastructure.

Fabriik is entering the world of NFTs with an exciting and innovative new product called FabriikX, with a preview unveiling from January 25. The initial offering of NFTs will be comprised of content from community contributors, allowing anyone interested to be included in the soft launch of the site.