Bithumb said in a (deleted) Tweet that they will compensate customers for the loss.

South Korean exchange Bithumb—the sixth largest in the world, has reportedly been hacked with damages amounting to $30 million in cryptocurrencies. According to reports, Bithumb initially acknowledged the $30 million loss, and said that they will cover any losses suffered by customers.

[Notice for the suspension of all deposit and withdrawal service] We checked that some of cryptocurrencies valued about $30,000,000 was stolen. Those stolen cryptocurrencies will be covered from Bithumb and all of assets are being transferring to cold wallet. 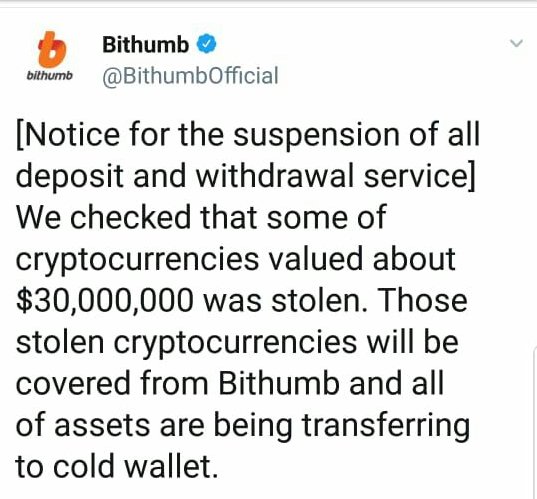 But the Tweet has been deleted, and they have not issued a more formal statement on the matter as of last check. The exchange reaffirmed, however, that they will be compensating any customer losses in a response to another user. 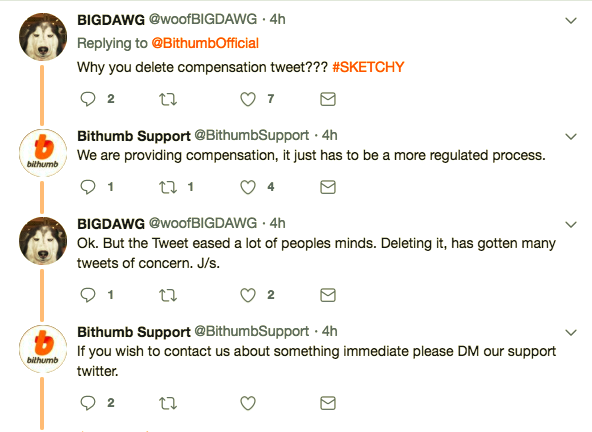 [Notice for the temporary suspension of the deposits]
Due to the increasing safety issues, we are changing our wallet system.
Please do not deposit until we notify.
*All deposits are not deposited into your wallet until all changes are completed.

*All deposit and withdrawal service will be stopped to make sure the security. We will keep notice you of the restart of the service. We apologize for your inconvenience and thanks for your understanding.

Bithumb urgently ask our valuable customers not to deposit any fund into Bithumb wallet addresses for the time being.

According to CoinTelegraph Japan, the exchange noticed an unusual access to its hot wallet on June 16, although the time of the alleged hack has not been specified. They immediately moved large sums of ETH to a cold wallet to prevent further damage.

This is the second time a South Korean exchange got hacked this month. On June 10, CoinRail lost $41 million from yet another hack, forcing it to move their funds and shut down. Although they have said that they will be resuming operations by July 15 “if it is determined that the service is ready to resume.”

Today’s security systems have been on an arms race against hackers, as they find more ways to siphon funds out of blockchain companies. Some hackers even target data repositories and demand ransom in exchange for the promise not to unleash users’ personal data. Early this month, a ransom of $1 million worth of the cryptocurrency Ripple (XRP) has been demanded of two Canadian banks, Simplii Financial and the Bank of Montreal (BMO). The hackers made their way through the banks’ security systems and into their clients’ data— names, passwords, account numbers and balances, social insurance numbers, security questions and answers of over 90,000 customers, and have been threatening to release the information to the dark web.