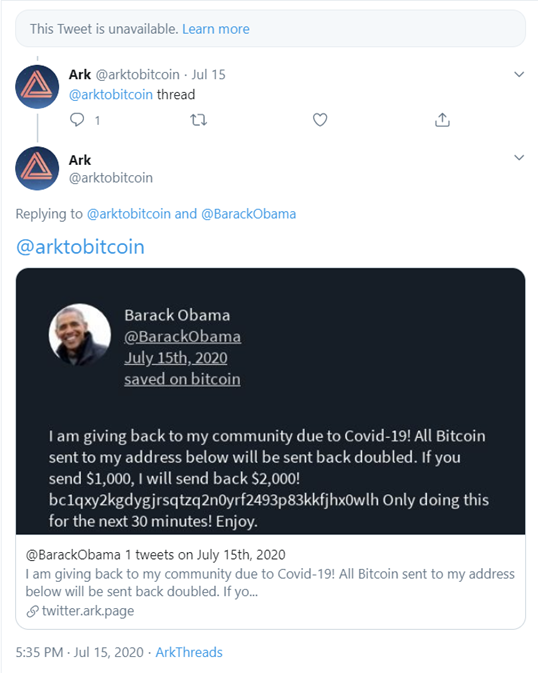 Ark is an app that is still in closed beta, but has a feature where it will automatically archive tweets to the Bitcoin SV ledger if you summon their account via the syntax:

The tweet replied to will display on Ark’s in-app Shared feed, as well as be timestamped on the ledger: 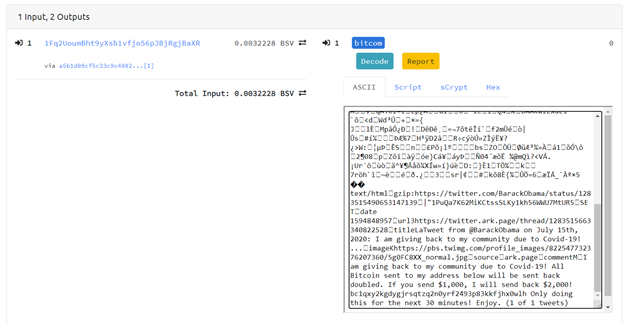 This feature was originally intended to archive long tweet threads so that users could read them later but became quite useful in this catastrophic event for Twitter.

Archiving tweets on-chain was an initial feature of Twetch and was also heavily used during this incident. Users recorded links and screenshots of almost all the hacked tweets, demonstrating the accountability feature of the Bitcoin ledger. Slowly but surely users are becoming aware of how the established technology platforms manipulate what their users see via algorithms and biased moderation. This event could be the final straw as the hack explicitly targeted Twitter’s verified accounts, colloquially known as ‘Blue checkmarks’.

The entire point of this feature was to communicate to users that these accounts have been vetted by Twitter to be authentic, yet hackers effortlessly promoted a scam from top followed accounts, leading to theft of ~$120,000 in BTC. Naturally, some users would fall for it, as they see power couple Kanye West and Kim Kardashian, top financial investors, athletes, musicians, and politicians claiming to ‘give back’ to their communities because of the COVID-19 pandemic. This situation seemingly could not get worse for Twitter when screenshots of features that appear to allow shadow-banning of users were leaked online. The leak hammers home that Twitter possesses absolute control and bias over what their users view.

These social media platforms are holding too much valuable data in private servers—which have led to the formation of honeypots for hackers and potential for abuse of power and corruption. Twitter has revealed itself to be playing God with their customers’ timelines, asserting they know what is best for the users as a former Twitter executive states in the timestamped link below:

These circumstances are enabled due to the flawed security model of the Internet, where the large tech companies have formed central hubs that have wide influence. Such influence, that once hackers compromise one of these points of failure, they obtain complete control.

Comparing the security of the Internet to Bitcoin where only the user has control of their keys and accounts, such a situation becomes near impossible. Each account must be compromised individually—controlling the back end of a company like Twetch or Ark would not yield control over all customers’ accounts.

The amount of disinformation, ‘fake news’ and media manipulation during a tumultuous 2020 is quite overt. Dogpiling on to the situation are companies like Twitter, Facebook and Google who leverage their power to further sow confusion, hate and divisiveness throughout their platforms because not only do they believe what is morally superior, they profit from it all.

This situation seemingly is primed for alternative solutions that Bitcoin can provide, where now tools in the users’ control are demonstrating their effectiveness against abuses of power.