The opening day of the CoinGeek Conference in New York saw Paul Rajchgod, Managing Director of Private Equity at Ayre Ventures, give a presentation titled, “BSV Venture Investments: It’s Time to Scale Up.” Rajchgod’s talk was aimed at educating companies and entrepreneurs in need of additional funding on the type of projects the venture capital arm of the Ayre Group looks to invest in, but also what it avoids like the plague.

As befitting a company founded by Calvin Ayre, Rajchgod said Ayre Ventures has a passion for BSV and other emerging technologies, along with non-tech sectors such as real estate. As the only infinitely scaling public enterprise blockchain, BSV is reshaping the world and Ayre Ventures is helping to create this new reality.

Ayre Ventures invests in companies and industries that are utilizing BSV to their advantage, be it firms building BSV infrastructure, supply chains, gaming, fintech, ad tech, social media, you name it. Ayre Ventures recently closed investments in two such firms—Blarecast and BuzzCast—both of which are presenting at the New York conference.

Rajchgod lured his audience down a dark alley by presenting some “ugly” slides showing an 111% compound annual growth rate, from a starting point of just 66 in 2013 to over 12,000 today. The next slide showed this “enviable” growth continuing to improve by 5-10% on a month-over-month basis. Any entrepreneur worth their salt would find such gains incredible.

But not Rajchgod, who revealed that the slides charted the number of cryptocurrencies that have been unleashed upon the world since 2013. Every day, this total increases by a dozen or two—hobby coins, meme coins, side chains, etc. Most of these are completely unnecessary, don’t work or are outright scams. In some cases, Rajchgod notes, it’s all of the above.

Rajchgod singled out a couple particularly hairbrained schemes, including ‘crypto for the dental industry,’ which identifies its ecosystem’s three pillars as dentists, patients and traders. Only a company that makes trading software has the right to view traders as a pillar and Rajchgod asked the audience how they’d react to a Netflix quarterly report crediting the company’s growth to traders trading Netflix shares.

Rajchgod got a few more chuckles out of some ‘food-themed DeFi’ projects, which he characterized as “an all-you-can-eat Vegas buffet of hacks, failures and pending regulatory problems.” There are DeFi-like offerings (TokenSwap) on BSV but they’ve somehow managed to launch viable businesses without adding yet another ticker symbol to crypto’s alphabet soup.

Ayre Ventures also has no interest in adding ingredients to this increasingly toxic stew. As Rajchgod puts it: “Does every project, every app, every newfangled fintech or loan idea really need its own crypto? No. Do any? Still no. All you need is BSV. One world. One chain.”

Rajchgod said Ayre Ventures’ focus on BSV was due to the technology being “as transformative as the internet itself.” BSV’s infinite scaling capacity not only makes it the ideal platform for micro- and nano-transactions with ultra-low transaction costs, it offers greater efficiency, arguably making BSV the most eco-friendly blockchain.

A number of companies (FYX Gaming, kompany) ultimately made the transition to BSV from capacity-constrained blockchains like Ethereum, a move that Rajchgod maintains will become increasingly common. With BSV capable of acting as an enterprise-level data management and value system, Rajchgod believes “BSV will become such a valuable tool for massive industries that we believe companies will literally need BSV just to stay competitive.”

While Ayre Ventures has led a number of BSV-related investments, Rajchgod noted that Omniscape developer Transmira’s recent funding round was led by a VC from outside the BSV ecosystem. Rajchgod says BSV’s growth hasn’t gone unnoticed by institutional money, with a growing number of VCs and family offices looking to invest in BSV-focused projects and—in some cases—elbow Ayre Ventures out of the lead role.

Rajchgod views this coopetition as healthy, reflecting capital markets in action, but also because it can alert Ayre Ventures to the existence of other companies that could benefit from both BSV technology and Ayre Ventures’ backing. 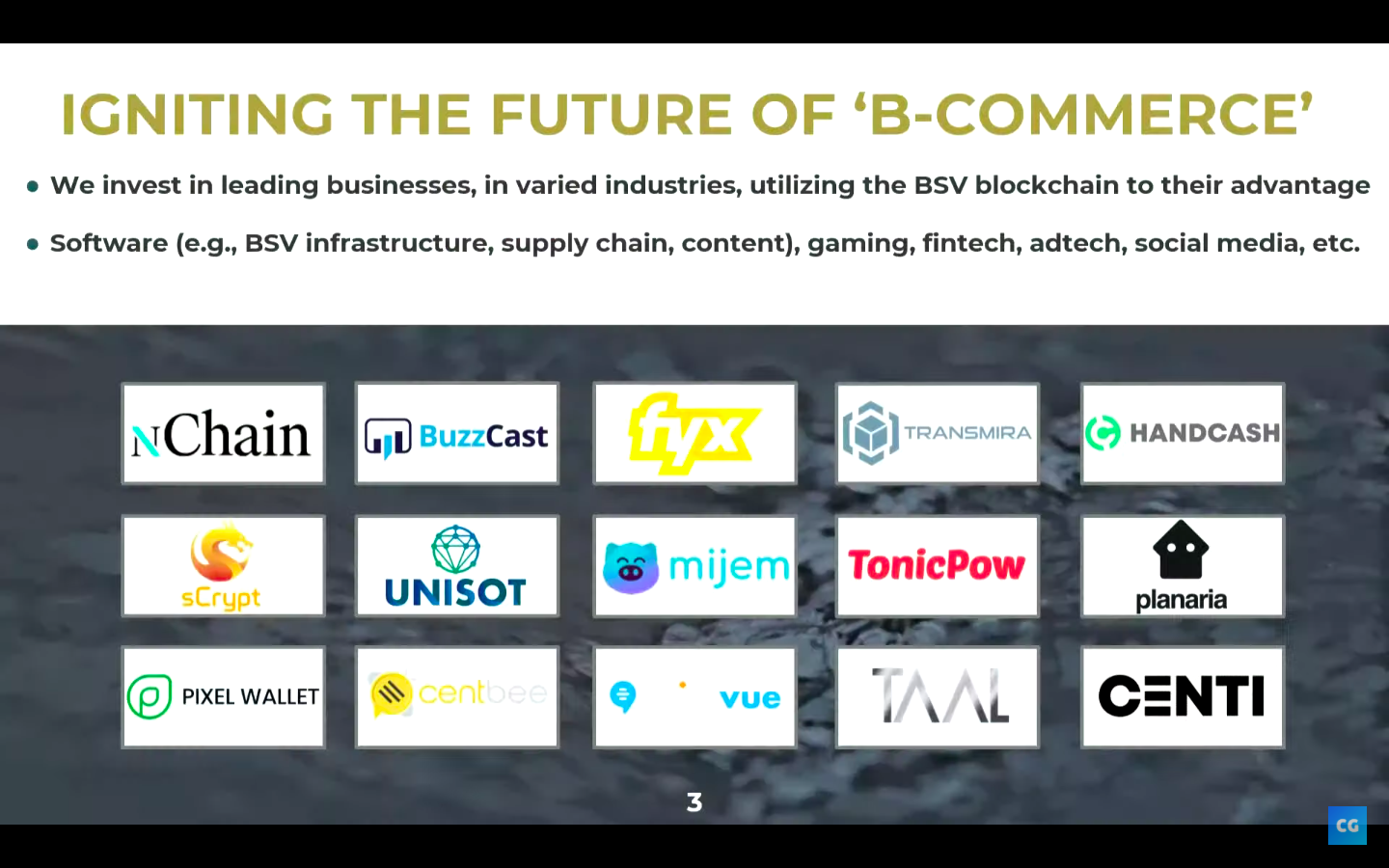 As for the nuts and bolts of what Ayre Ventures looks for when considering an investment, Rajchgod cites business models that scale, recurring revenue, high-margins and low fixed costs. Ayre Ventures favors companies with a complete package, but welcomes both senior growth stage companies as well as start-ups and new entrepreneurs.

Whatever the new opportunity, Ayre Ventures would like to see that it’s already in a growth stage. For a startup, ideally the building should already be underway—maybe it’s in alpha or beta, with some customers already using the product. But Rajchgod also wants to see modernization of massive industries, utilizing technology that allows legacy companies to easily integrate BSV apps.

BSV has alerted enterprises, governments, and end users to the endless possibilities it can offer. Mobile apps, Internet of Things solutions, social platforms and marketplaces, Software as a Service (SaaS) and Bitcoin as a Service (BaaS) platforms, gaming and esports, NFTs, stablecoins, the Metaverse… If you’re ready for BSV, contact Ayre Ventures online and let’s be positively disruptive together.