Block reward miners haven’t had a good year as the prices of most digital assets have tumbled, and for those in Texas, the situation is bound to get worse. The state is going through a record-setting heat wave, driving up the electricity demand, with the miners being among the casualties of the hike in demand.

Texas is no stranger to high temperatures around this time of the year. However, this year, the extreme heat has set in much earlier than in previous months, with one state climatologist telling CNN that the state is “getting August weather in May and June.”

This heat wave has seen many Texans cranking up the air conditioning, leading to record demand for electricity. And while the state’s dire need for electricity has been offset by the rise in renewable energy, which now accounts for 38% of the state’s power, this year’s demand is unprecedented, and it’s claiming victims.

Earlier this month, Texas set a new record for energy usage at 78,206 megawatts (MW), beating the previous record, which stood at 77,460MW. A prediction model by the state’s grid operator shows that this demand could hit 80,000MW this week. 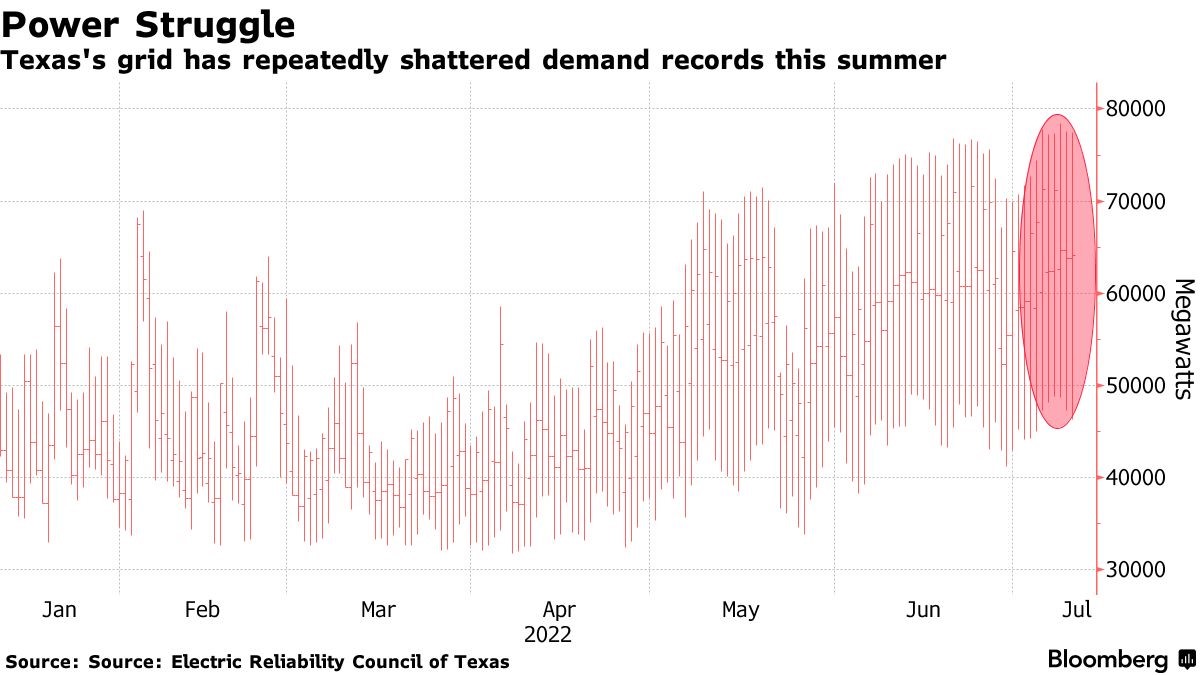 Block reward miners in the state have been among the first victims. Texas is home to several industrial miners who have flocked to the state due to its friendly regulations for the industry and its relatively low energy charges. Many of these now have to shut down operations, heeding the call of the state’s power grid operator, the Electric Reliability Council of Texas (ERCOT).

Speaking to Bloomberg, Lee Bratcher, the president of the Texas Blockchain Council, revealed that the shutdowns will free up over 1,000MW of electricity.

“There are over 1,000 megawatts worth of Bitcoin mining load that responded to ERCOTs conservation request by turning off their machines to conserve energy for the grid. This represents nearly all industrial scale Bitcoin mining load in Texas and allows for over 1% of total grid capacity to be pushed back onto the grid for retail and commercial use.”

Several block reward miners have made statements revealing that they have shut down their mining rigs to ensure that the state’s residents can get as much power as they need during the heat wave, even as the cost of power has almost doubled from the 2022 average.

One of these companies is Core Scientific, with CEO Mike Levitt telling Bloomberg, “Currently, 100% of the machines located in Texas have been powered off to provide support for the ERCOT grid. In troubled situations including the current Texas heat event, we have been curtailing power and will continue to curtail power as needed.”

Core Scientific operates in six other states in the U.S., and according to Levitt, just about 15% of its operations are in Texas.

Argo Blockchain (LSE: ARB), a block reward miner that’s dual-listed in London and on Nasdaq, has also heeded the call to shut down operations. Speaking to one outlet, CEO Peter Wall clarified that the company believes profits should never be placed ahead of human life.

“In times of high-power demand, we believe that people should take priority over crypto mining. When ERCOT sends out a conservation alert, we take it seriously and curtail our mining operations. We did this again this afternoon, as did many of our peers in the mining space,” he said.

Argo has been investing heavily in Texas and will be heavily impacted by the shutdowns. As CoinGeek reported, an information leak last year showed that it was planning to build a $2 billion facility in the state. Since then, it has raised $127.5 million in two separate rounds to fund its Texas expansion, including from NYDIG in May this year.

Riot Blockchain, which operates a mining facility in Rockdale, is also shutting down operations in the state.

And while the shutdowns will impact their BTC mining, the miners will not exactly be walking away with nothing. They are set to receive payment from ERCOT to downsize their energy demands as part of the agency’s demand response agreements. And with power rates shooting up in recent months, taking the payoff might be the most sensible thing for the miners, even as the bear market continues to bite.