The European Central Bank (ECB) recently released Issue 18 of its Macroprudential Bulletin, which took a closer look at stablecoins, DeFi, and climate risks associated with ‘crypto-assets.’

The Macroprudential Bulletins are designed to provide insight into the work the ECB is currently doing in the field of macroprudential policy. You can read the full Issue 18 here or read a summary and analysis below.

Financial stability risks stemming from crypto-assets are rising, and the crypto-asset ecosystem has become more complex and interconnected.

The introduction to Issue 18 takes a closer look at financial risks associated with digital currency assets. It specifically names the rapid rise of stablecoins and their widespread use as requiring “the urgent implementation of appropriate regulatory, supervisory and oversight frameworks.”

The report acknowledges that the explosive growth in NFTs and other digital tokens is reaching the point where they will pose risks to wider financial stability. As a result, it concludes that associated markets need to be properly regulated and supervised. It also calls for a coordinated response among global authorities due to the cross-border nature of digital assets. Such a harmonized approach to global regulations is well underway. Stablecoins and their growing risks

Stablecoins are in the spotlight due to their rapid growth, increasing global use cases, and potential financial risk contagion channels.

Issue 18 zeroes in on and focuses on stablecoins. It acknowledges that their rapid rise and widespread use worldwide could potentially pose a systemic risk to the traditional financial system.

The report explicitly references “events in early May,” indicating that these events show stablecoins might not be so stable after all. It acknowledges their critical role in the digital asset ecosystem and notes that Tether accounted for 65% of trading volume in March 2022.

Just how big has the stablecoin market gotten? The report notes that the average quarterly trading volumes of stablecoins reached €2.96 trillion ($3 trillion), not a far cry from the average €3.12 trillion ($3.17 trillion) volume of U.S. equities on the New York Stock Exchange. In addition, the ECB report found that Tether is involved in half of all BTC and ETH trades.

When addressing the risks of stablecoins as a whole, the report notes potential contagion, the lack of transparency regarding reserve assets, runs on coins, and the potential for stablecoins to implode or depeg, giving UST and Tether as examples. It calls for a “granular and robust” global regulatory approach to mitigate these risks.

“As the mining and expansion of these crypto-assets are fully dependent on energy supply, their valuation is particularly vulnerable to jurisdictions’ climate policies. Increasing financial exposures to such crypto-assets are therefore likely to contribute to increased transition risk for the financial system,” an article on the ECB website says.

The environmental impact of digital currencies and digital currency assets has been of great concern to most governments in the past few years. Issue 18 sheds light on how the ECB is thinking about these risks.

The report notes that some digital currencies, particularly proof-of-work ones, have carbon footprints similar to some mid-sized European countries. It mentions that the valuation of these digital currencies is subject to the risk of jurisdictional climate policies in the quest for net zero. It states that it’s unlikely the holders and speculators of these currencies have priced in the possible policy measures and how they’ll impact token value.

Even more striking is the statement that the yearly emissions for BTC and ETH negate past and target greenhouse gas emission savings for most euro area countries. 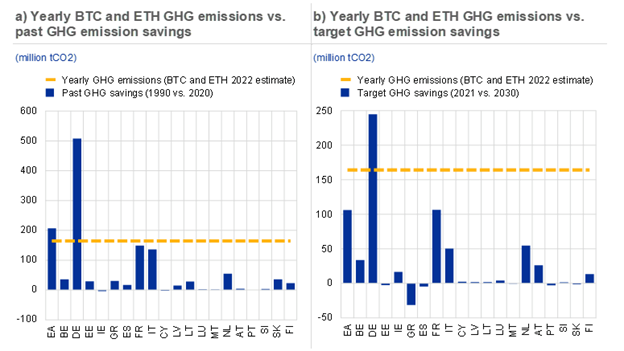 Highlighting the severity of the situation, the report notes that Sweden has called for a ban on proof-of-work mining as it needs the renewable energy targeted by miners to meet its Paris agreement targets.

As for what EU authorities may do to mitigate these risks, the report does not state anything concrete in the works but finds it “highly unlikely that EU authorities will restrict or ban fossil fuel cars by 2035 but refrain from taking action for assets whose current yearly carbon emissions are enough to negate most euro area countries’ past and target GHG emission savings.”

DeFi in name only

DeFi protocols or platforms claim to have a decentralized governance structure, although in reality governance is often concentrated…As such, while purportedly claimed to be decentralized, DeFi applications retain a high level of centralization.

The third area of focus for Issue 18 of the Macroprudential Bulletin is DeFi, or decentralized finance. It begins by noting that the ‘total value locked’ (TVL) in DeFi protocols grew from €18 billion ($18.26 billion) in January 2021 to over €240 billion ($243.49 billion) by December 2021. This figure fell by over 40 billion after the Terra/Luna crash in May.

The report acknowledges that the high-interest rates available in DeFi have been a key driver of its growth. Still, it questions the long-term sustainability of these interest rates and whether the risks have been priced appropriately.

It also delves into how DeFi works, using open-source technology and so-called smart contracts, and briefly outlines how the complexity of these interlinked systems poses ever-greater systemic risk. Noting that holding governance tokens theoretically allows users to influence characteristics of the related protocols, it states that in reality, at this stage, 1% of wallets control 97% of these tokens. It states that the Uniswap team holds 80% of UNI tokens, giving a concrete example of this concentrated hoarding of tokens.

Turning to the risks of DeFi, the report names excess leverage and risk-taking, liquidity mismatches, and the inherent interconnectedness of the DeFi ecosystem. It highlights the recent downward price spirals as one of the biggest risks. It views the absence of banks and central bank balance sheets to act as shock absorbers. Bugs within codes leading to exploits and thefts are also mentioned.

As for regulations to deal with DeFi, the report acknowledges that it will be challenging to regulate and enforce regulations on DeFi effectively. It calls for innovative regulations to close regulatory loopholes and notes that because code must be deployed, upgraded, and governed, DAOs, developers, and governance token holders could be brought under the regulatory perimeter.

As this report shows, the ECB has its finger on the pulse of what’s happening in the digital currency industry. It demonstrates an impressive understanding of the inner workings of the markets and shows it has a firm grasp of its particulars.

It’s also abundantly clear that the EU will not let these risks slide. It’s renowned for being one of the strictest regulators in the world. For example, it was one of the first to tackle issues related to data and privacy, and it’s almost certain to be ahead of the curve on regulating so-called digital assets.

While the reaction of the EU to any of these points should be at the forefront of the minds of speculators, developers, and other industry participants, one of its particular concerns should be its findings on stablecoins and energy usage.

It’s unclear how Tether will survive if the EU (and possibly the USA) demand that it shows its reserves to reduce systemic risk. Since it’s responsible for such a huge portion of trading volume, the secondary risks of a Tether implosion should be obvious.

Likewise, the concerns expressed about energy usage are worrying. The EU is one of the most committed jurisdictions to achieving net zero carbon emissions and overall environmental sustainability. As the report clearly states, it’s not likely to let energy hogs like BTC interfere with its commitments to the Paris Agreement. The best strategy here would be to show utility in exchange for energy usage, but BTC is incapable of doing so. Hopefully, the EU will be able to separate proof-of-work blockchains with utility from those that provide no value rather than going for a blanket ban.

Overall, this was an insightful and eye-opening report detailing how the ECB thinks about the industry and what actions it may take next. You can read the full report here.

CoinGeek’s Kurt Wuckert Jr. recently joined Christopher Messina on the Messy Times podcast to discuss Bitcoin’s history, why big blocks are the way, and what Bitcoin SV is.

The NTS is also looking into individuals using digital assets to evade inheritance and gift taxes, as well as online platforms relocating their servers to tax havens.

Revati Nepal, chief of the currency management department at the NRB, said that the draft bill would be forwarded to parliament immediately after the central bank completes its internal discussions.

Despite approving its licenses, the Thai securities regulator still needs to inspect the firms' operations before they can kick off market activities, a report noted.