Despite what some laser-eyed zealots might have you believe, Bitcoin wasn’t designed to eliminate central banks from the economic picture, and Bitcoin may one day help banks acquire many tools they currently wish they had.

The final panel of Day 1 of the CoinGeek Conference in Zurich featured a lively discussion of The History of Money & The Future of Bitcoin. The quartet of monetary minds sharing their views were Urs Birchler, Professor of Banking, IBF, University of Zurich; Dr. Jürg R. Conzett, Founder & President, MoneyMuseum; Thomas Moser, Alternate Member of the Governing Board, Swiss National Bank; and Dr. Craig S. Wright, Chief Scientist, nChain.

Moderator and Bitcoin Association Founding President Jimmy Nguyen got things started by querying the panel on how important it was for any form of money to serve one or more of the following functions: a medium of exchange, a unit of account, a store of value or a standard of deferred payment.

Conzett noted that an item may embody three of those qualities without functioning as money, while Moser claimed the unique feature of money was as a medium of exchange. Other assets can serve as a store of value but ultimately, money is what people accept as payment in exchange.

Wright noted that livestock was once considered a medium of exchange, but livestock grow old and die, so the same cow might have a very different value five years from now. People need to be able to recognize money as stable over time because money isn’t capital, only a measurement of capital. Money needs to serve as an accounting system and a means of exchanging other items, ultimately functioning as a catalyst and a lubricant for the economy.

Birchler added that money was a social construct, and thus no person can consider something money if others don’t. Money was, essentially, a very productive collective illusion. The early evolution of money saw it embody everything from the cowrie shells of South Asia—Birchler noted that a biologist had recently corrected him that the shells were actually snails—to the giant stone wheels of Micronesia’s Yap islands. The first coins were created around 1,000 BC and Nguyen asked the panel whether these early coins acquired value based solely on the value of the metal or substance from which they were minted.

Compared to those early non-coin monetary efforts, Conzett noted that the use of metals was “the birth of a norm.” Norms are required in other areas, such as electricity or weight, and the establishment of units of comparison—as opposed to units of account—allow the comparison of one thing to another, such as trading three silver coins for a cow.

Nguyen remarked that the first known paper currency/banknotes were introduced in China in 806 AD, growing in number over the next 500 years until their ubiquity led to a rapid depreciation in value and soaring inflation. Nguyen asked the panel what the financial world had learned—or should have learned—from that experience.

Moser said the obvious lessons were that central banking is a very difficult job, that the supply of money matters and one needs ways to manage that supply to ensure you don’t flood the market. The gold standard was one means of restricting this supply, but this standard—introduced in the U.K. in 1816 and in the U.S. in 1900—essentially fell apart during the expansive monetary policy of the Great Depression.

Wright warned that long-term problems arise once you start manipulating the money supply. It’s different in the short-term, in which the right actions can make sectors of the economy grow faster (including by convincing people who sit on their money to start spending it rather than see it inflated into worthlessness). But Wright noted that most central bankers are in thrall to politicians, who have much shorter planning cycles. Whereas a central banker might have a 20-year plan to actually build something that will last, politicians need to resume campaigning for re-election every 18 months or so, making their needs far more immediate (and usually far more destructive).

Moser agreed with Wright’s view, citing research that shows the more independent a central bank is from the political process, the lower inflation becomes. Moser expressed the view that central banking should be a technical process, not a political football.

Birchler expressed concern that fiat money is currently inflated to an unprecedented degree in so many countries at the same time. Central bankers are claiming there’s nothing to worry about, that order will be restored before any catastrophe occurs, but Birchler said it remains to be seen whether a soft landing is possible. If not, consumers may return to the gold standard or embrace new safe havens such as Bitcoin; basically, anything not in the hands of central bankers.

Nguyen asked Wright if Bitcoin was created to replace fiat, a view espoused by many of the technology’s early adopters. Wright said Bitcoin was simply a mechanism and a protocol that wouldn’t stop fiat or central banking. In fact, blockchain technology would allow central bankers to enact silly policies on top of Bitcoin so that there would be a permanent record of how stupid they were for all the world to see.

But Wright also said Bitcoin—in particular the locked protocol of BSV—was a game in which the rules will never change. Every Bitcoin that will ever exist already exists. Unlike gold, there will be no new discoveries that result in a glut of the product underpinning the value of money. That said, Moser said the wild value swings that the BTC token has undergone over the past year posed a major obstacle to becoming a medium of exchange. Conzett echoed this view, noting that all of his colleagues who’d dabbled in BTC had done so in the hope of getting rich, not for the purpose of purchasing any product.

As for BTC supporters hailing the token’s kludgy adoption by online payment processors such as PayPal, Wright argued that this was more a sign that PayPal was no longer afraid that BTC will usurp its business model. Unlike BSV, which aims to facilitate transactions with fees as low as 1/1000th of a cent, BTC transaction fees are higher than Visa, Mastercard and even Amex.

As Bitcoin’s profile rises, there’s been much talk about governments getting in on the action through central bank digital currencies (CBDCs). Birchler observed that there’s a contrast between the ‘sexiness’ of the idea and the practical problem of combining two technologies. Birchler related a popular Swiss saying that you can’t have both the dime and the bagel, and noted that asking too much of a central bank rarely ends well.

Conzett warned that CBDCs could create a second exchange rate problem if a central bank chose to issue too many or too few digital tokens. But he also suggested that investors may not take money seriously for too much longer, and that the credit-based system that has endured for several centuries may need to evolve into something slightly different in order to survive. 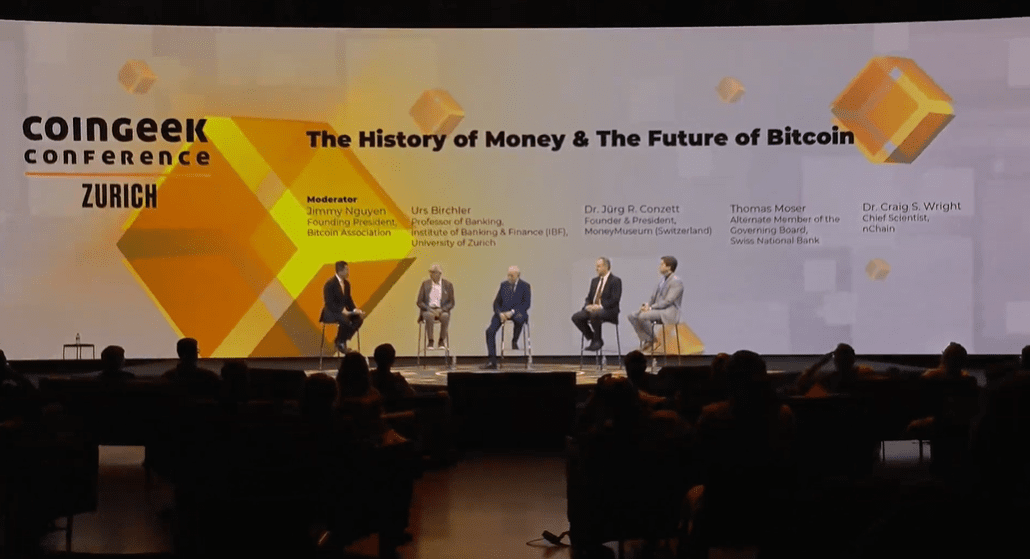 Wright’s vision for the future is of continuing to scale Bitcoin and let banks explore new things to do with the technology. Wright reiterated his stance that Bitcoin wasn’t an anti-bank technology, adding that the headline from the January 3, 2009 edition of the London Times he encoded into Bitcoin’s Genesis block – Chancellor on brink of second bailout for banks – wasn’t anti-bank.

Wright said that anyone who read the article under that headline would understand that he was criticizing the chancellor for telling banks what to do due to political concerns from parliament (specifically, forcing banks to spend money they didn’t have solely to reassure nervous homeowners who’d seen the inflated value of their dwellings tumble).

As for Bitcoin’s future, Wright said the plan was to go on scaling BSV to make it bigger, cheaper and easier to use. And then the fun can really start.