We live in a world where the virtual world is increasingly integrating into the ‘real’ world. With advances in augmented and virtual realities, we’re living in a world in which the distinction between what’s real and what isn’t is growing smaller. Transmira is on the frontline in merging these two alternate realities (AR and VR) into experiential reality (XR). The company’s founder Robert Rice took the stage at CoinGeek Zurich to share with the audience what his company is building on the BSV enterprise blockchain.

Transmira is building the XR Metaverse, an encompassing multiverse that merges AR and VR. Rice described the Metaverse as “everything, everywhere connected.”

“This is what we’re trying to do—bringing all these pieces together and linking it back to the real world. This is the missing thing that most of this industry is completely overlooking,” Rice told the audience.

While introducing Rice, Bitcoin Association Founding President Jimmy Nguyen described him as “the man from the future.” And true to this description, Rice’s presentation ventured into futuristic projects that his company has been embarking on.

In line with blending AR and VR, he revealed that his company wants to make it possible for users to access 3D versions of live locations and be able to interact with the people in these locations, “kind of like holograms of them moving around and interacting with you.”

Rice is out to ensure that everything in the real world ultimately has an equivalent construct in the Metaverse.

“To do this, we need blockchain, and Bitcoin SV is the only one that’s capable of it. I’m frequently asked why BSV and my answer is generally, because it can, now. Not two years to come, now. It’s fast, it’s scalable, it’s stable, the cost is really low and it still brings all the other benefits of a blockchain such as trust and provenance,” he explained.

Transmira’s Omniscape platform, an XR Metaverse, has continued to grow rapidly. As Rice revealed, it’s looking into creating an identity and avatar registry, virtual real estate in which users can buy and own virtual locations and a virtual goods and 3D NFTs marketplace. Omniscape will further allow users to create AI avatars which they can commercialize and have user content creation tools. The platform will encompass all five fundamental building blocks – identity, location, data, commerce and blockchain technology. 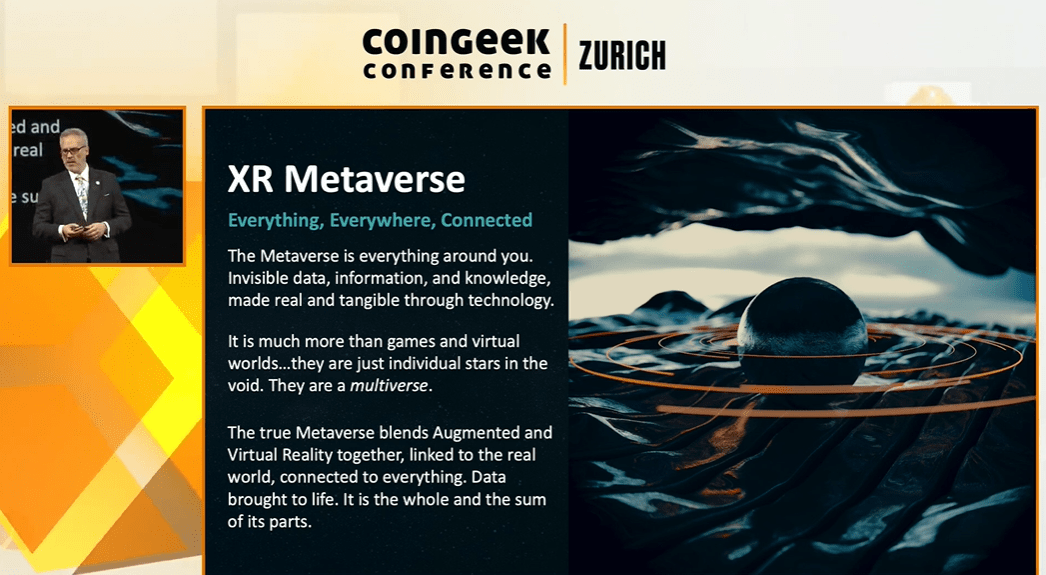 Rice added, “By this time next year, the world is going to be set on fire and they are all going to be talking about BSV and blockchain because it’s going to be powering probably the single most change to how we think about the world around us.”

Transmira expects to launch its virtual goods, 3D NFTs, VR linking, marketplace and a digital airspace rights management platform in the summer this year. In the fourth quarter of the year, the company will embark on a global multi-brand XR campaign dubbed “Back to Retail.” In the coming year, it will launch advanced content creation tools, 1:1 scale digital twins, smart city integration and so much more.

This is going to be pretty freaking cool. All on the blockchain. #coingeekzurich #Bitcoin #BitcoinSV @OmniscapeXr pic.twitter.com/yGthakQDcP