Panelist Konstantinos Sgantzos, a scientific advisor at Bolooba, kicked it off by describing artificial intelligence as an over-hyped term. “There is no intelligence in AI,” he said. “We should redefine it as an analysis of information. When we talk about a narrow AI, we are talking about a specialized agent. We have big data, which is why the blockchain is very important.” 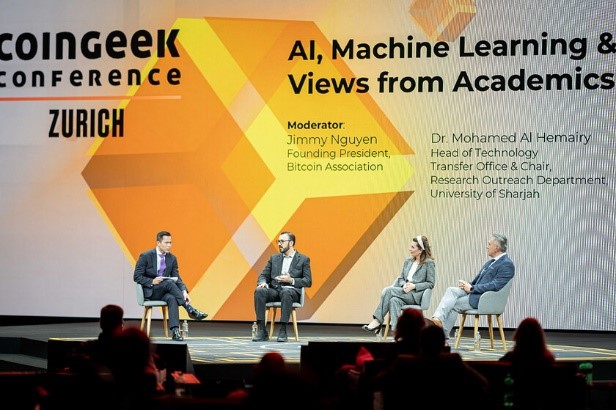 A common misconception, according to Sgantzos, is that AI researchers can train machines with little data. Instead, big and trustworthy data is needed. For him, that is where the blockchain comes in.

Dr. Eva Porras, an honorary research collaborator at Universidad Rey Juan Carlos, emphasized the need for blockchain technology. “The key to everything is accountability,” she said. “The original Satoshi publication describes the only engine that can ensure accountability because it is the only one with safeguards in the protocol.”

“The objective of the whole protocol,” she continued, “is to ensure the truthfulness of data and to guarantee its safety. There is only one truth for me, which is Satoshi Nakamoto’s vision. Others are derivations where someone took an idea and changed it into something else. I’m not particularly eager to get into that as it is far from our interest.”

Dr. Mohamed Al Hemairy, head of Technology Transfer Office & Chair, University of Sharjah, told the audience that his university has several blockchain projects and has recently established a blockchain research center. One of the projects detects fake videos. Faking has become very common, and a recent report claims that by 2022, most consumers will see more fake news than real news.

“With AI, more inexperienced people will be able to create fake videos; therefore, we need to store features like facial borderlines which cannot be changed and can be used as a reference to determine which video is inauthentic and which is real,” he said.

Dr. Al Hemairy announced that more BSV-centric projects will be launched that serve the academic research department to verify and authenticate academic certificates. 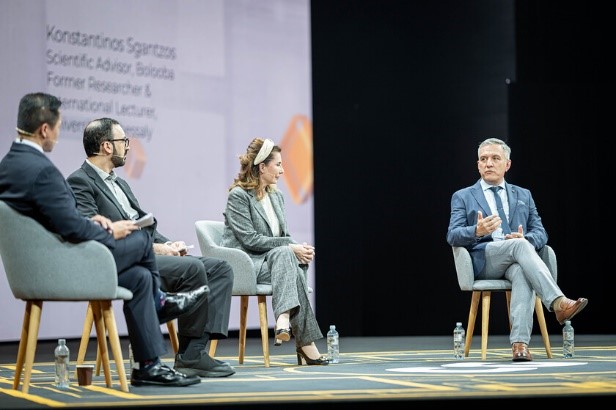 Speaking about a paper on AI implementations using the blockchain, Sgantzos, who wrote it with financial cryptographer Ian Grigg, said: “We have developed smart devices right now: our watches are monitoring health, including heart conditions. So, you can feed this data in a personalized manner anonymously or pseudonymously, which is then fed into an agent on a blockchain who can decide if you need medication or not.”

“Another use case is when an AI researcher needs to learn machine learning, which is very expensive. This is where blockchain makes many things possible. For example, in the context of online comments, we can determine if a comment is positive, negative, or an irony.”

Dr. Al Hemairy added, “The size of the block allows us to put more data on-chain, so the transfer of data and interaction, and also real-time analysis can be done more efficiently. A low transaction fee is one of the vital features compared to other ledgers that have inflated fees. The support and knowledge we get from the BSV community are amazing.”

For Dr. Porras, the blockchain is about people controlling their own lives. “They need to be co-responsible for what happens in society. Transparent engines that can identify menaces like fake news and the fake videos that go with them would be helpful.”

In closing, Sgantzos said computation on the blockchain is possible in many ways: simple tests like deterministic computation and by creating complex devices. However, he stressed the need to outsource machine learning because “it is a very power-incentive tool, and we cannot have something like that with the current AI technology. But we will be at a very different place in 10 years.”