Jerry Chan, CEO of TAAL Distributed Information Technologies Inc (CSE:TAAL | FWB:9SQ1 | OTCQX: TAALF), took part in the CoinGeek Live conference, where he spoke about the wider bitcoin ecosystem, and the urgent need for Bitcoin miners to transform into transaction processors.

Chan said that until now, Bitcoin miners have been pursuing a broken model. At present, miners are seen as infrastructure providers, who are rewarded by block rewards. This rewards the speculative value of bitcoin mining. But according to Chan, there is disconnect with reality—instead, miners should be rewarded based on the utility value of their function.

Currently, miners compete to see who can generate the most hash, fighting each other to grab tokens which don’t yet have the utility value to back them up. Chain said TAAL is thinking beyond the time when the block reward for miners becomes zero—how are miners supposed to support themselves in a world where mining rewards no longer exist? The answer is to shift to becoming transaction processors. Chan said miners would continue to shift their business models from block rewards to a more diversified collection of services in the coming years. There is already a pressing urgency to move towards this new reality, with Chan estimating the traditional model of Bitcoin mining rewards could be in trouble over the next 1-2 years.

Chan argued that declining mining rewards required exponential increases in transaction volumes—and if that point of crossover doesn’t fall somewhere in the next 12-24 months, the mining industry (and the whole Bitcoin ecosystem) would be in jeopardy. As a result, TAAL is focusing on driving transactional volume, as well as identifying new opportunities for miners.

Chain said miners do still have a crucial role to play in the transaction process, and their function will still be needed long after mining rewards have waned. Chan said that every online activity is a transaction, or relies on transactions—any login to a secure site, for example, or any exchange of data. When these are recorded on a global public ledger, there is scope for trillions of transactions to be processed.

With microtransactions on BSV, this presents new opportunities for mining rewards, by acting as transaction processors to facilitate these transactions at scale. Chan estimates at the lower end this would create a market worth hundreds of billions per year, providing the answer to the problem facing all Bitcoin miners in the coming years. 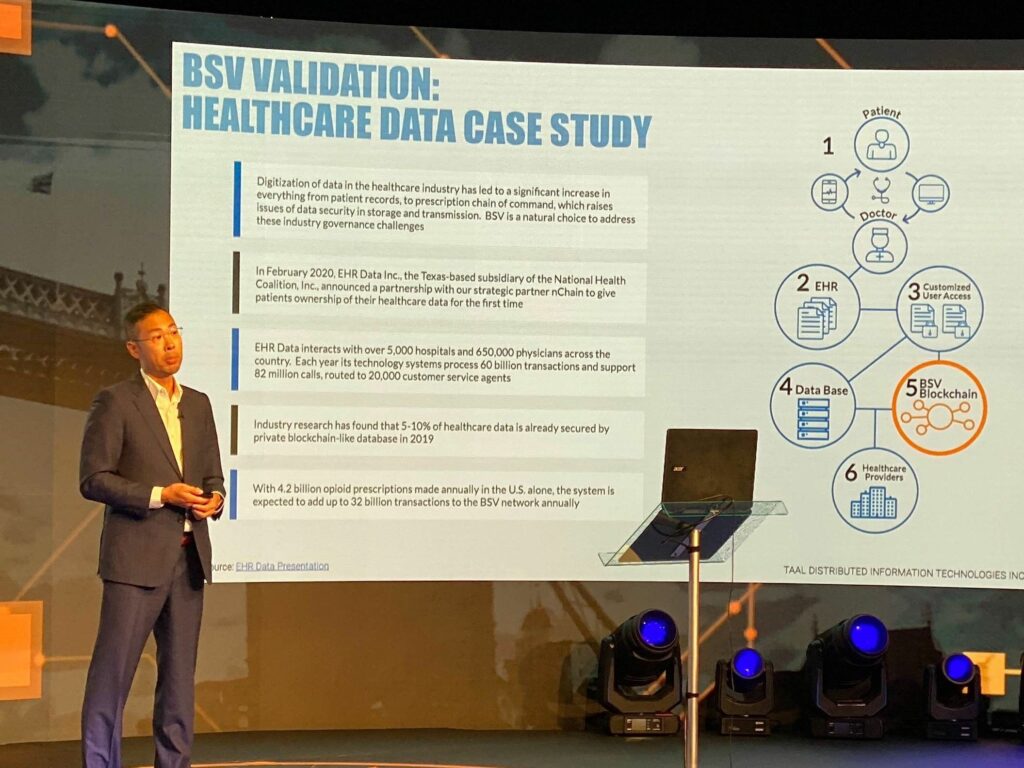 Chan said we are currently seeing the tip of the iceberg on the amount of real world applications that can be powered by blockchain. Citing the healthcare example of tackling the opioid crisis raised in the EHR Data presentation, Chan said that even recording opioid prescriptions on the blockchain would result in up to 32 billion transactions on BSV annually.

According to Chan, TAAL is providing its clients with all the benefits of private blockchains on a public blockchain ledger. The reason this is built on BSV is because it remains the only public blockchain that can scale unbounded. Artificial scaling boundaries mean other platforms are simply not viable for the long-term, and only BSV provides the limitless capacity Chan and the team at TAAL demand for their projects.

Closing the session, Chan points to the establishment of a new IP division, focusing on research and developing new technologies on BSV. This will be based out of their office in Switzerland, where the firm has recently established a presence. Chan said that with the new regulatory environment in Switzerland providing legal certainty, and a supportive legislative framework for blockchain businesses, the country was set to become a global leader for blockchain industries in 2021 and beyond.