Many of the shadier projects in the digital currency space will lay low when they receive criticism, staying quiet and hoping not to draw more attention to their questionable methods. That’s not the case with BitHull. After CoinGeek recently covered BitHull’s product offerings, and questionable promises that anyone could get rich at home, the company has demanded we retract the article, and threaten legal action.

Shortly after CoinGeek published our coverage of BitHull’s offering on April 23, BitHull makes FPGA mining promises that are too good to be true, we received the following request from Matias Milet, self-described as a VP at BitHull, requesting for the article to be removed. 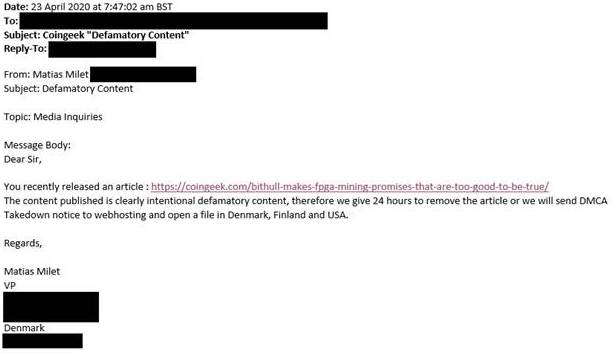 CoinGeek stands by its coverage, as we sourced opinions from mining experts that FPGA mining, which BitHull advocates for, is not only inferior to ASIC mining machines, but couldn’t possibly mine for profits at the rate BitHull was claiming. In response, we reached out to Mr. Milet and offered to interview him, as well as perform a benchmarking comparison.

That wasn’t enough for Mr. Milet, who rather silence our reporting than prove the value of his company’s products. His response insists we should remove our content, and threatens legal action against the writer of the piece, Larry Baker, as well as Ayre Media, Servers.com, and petitioning Google to remove our content from their algorithm. Despite Mr. Milet’s threats, CoinGeek is sticking to its story as it’s based on thorough reporting, and the opinion of industry experts. We called out BitHull because it offers something that’s simply too good to be true, and we were willing to put our money where our mouth was, with a fair benchmark of various mining equipment, as well as a fair interview for Mr. Milet to plead his case.

But BitHull doesn’t want to prove anything, they just want the negative reporting to go away. So rather than compete in the fair marketplace of ideas and facts, they threaten lawsuits and DMCA take down notices.

CoinGeek won’t succumb to these types of bullying tactics, and will continue to report on the digital currency space with facts and expert analysis of the stories. We’ll report further on the next steps BitHull choses to take.