As COVID-19 continues to ravage Europe, fear has gripped the hearts of many who are now trying everything they can to protect themselves. In the U.K, local authorities have warned the public against scammers who are posing as legitimate organizations to lure in their victims. The scammers promise the victims a list of the active COVID-19 infections in their area for a BTC payment.

The U.K. has been one of the worst hit nations in the world, and as such, it’s only rational that the residents are scared for their lives. This is exactly the kind of situation that fraudsters thrive in. As Action Fraud revealed, there has been a 400% rise in fraud related to COVID-19 in March.

In the period between February 1 and March 18 this year, Action Fraud received 105 reports from victims who fell victim to these scams. The total amount lost is estimated to be totaling close to £970,000 ($1.2 million). The majority of these victims relate to people who tried to buy protective masks, hand sanitizers and other related products.

This has caught the attention of a number of local watchdogs which have issued warnings to residents in their jurisdictions against falling victims to these scams. In its warning, the Manchester City Council revealed that one of the tricks the fraudsters are using involves BTC. They send emails to their targets claiming to be from the World Health Organization and the Center for Disease Control, two institutions on the forefront against COVID-19. They then offer to send the victim a list of all the active infections in his local area for a fee which must be paid in BTC. In some instances, these phishing emails redirect the victim to a credential-stealing website.

On its part, the Norfolk County Council has revealed over five elaborate tricks that the fraudsters are employing. They include sending text messages claiming to be from the U.K. government promising the victim £458 ($568) to help them battle the economic effects of the pandemic. They come with a link that redirects the victims to a website that steals their credentials. 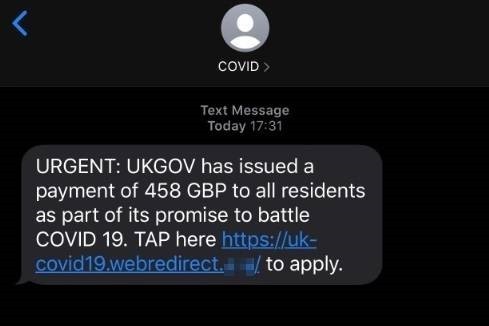 Other maneuvers include emails claiming to be from the Department for Education offering free school meals during school closures; cold calls from the Coronavirus Trust Fund (which doesn’t exist); cold calls from Lloyds Bank referencing Coronavirus which require the victim to authenticate their details; and physical visits from imposters claiming to be insulators sent by the government.

Earlier this month, the Financial Conduct Authority issued a warning against COVID-19-related scams, including those pertaining to digital currencies. “Beware of investments that appear to be too good be true. If you decide to invest in something offering a high return or in a cryptoasset, you should be prepared to lose all your money,” the regulator cautioned.