After nine years of controversial, international infamy, the Ayr United kit launch is now truly going to the dogs. Scottish-based huskies with a strong TikTok following will now take over the modelling of the kit. This is the 10th year of sponsoring Ayr United, making it one of the longest standing sponsorships in the modern era, globally.

With a new owner at the helm there are reasons to be optimistic about the coming season for Ayr United especially coupled with the continued backing of long-term sponsor, Calvin Ayre, using the Bitcoin SV brand for the 3rd year.

This kit launch has prompted shirt maker, Hummel, to look into making replica dog shirts for the teams they sponsor globally. European Marketing Director Mark Hummels commented: “Fans are always wanting to show their true colours and the concept of walking the dog in your teams’ colours is something we will explore for sure.” 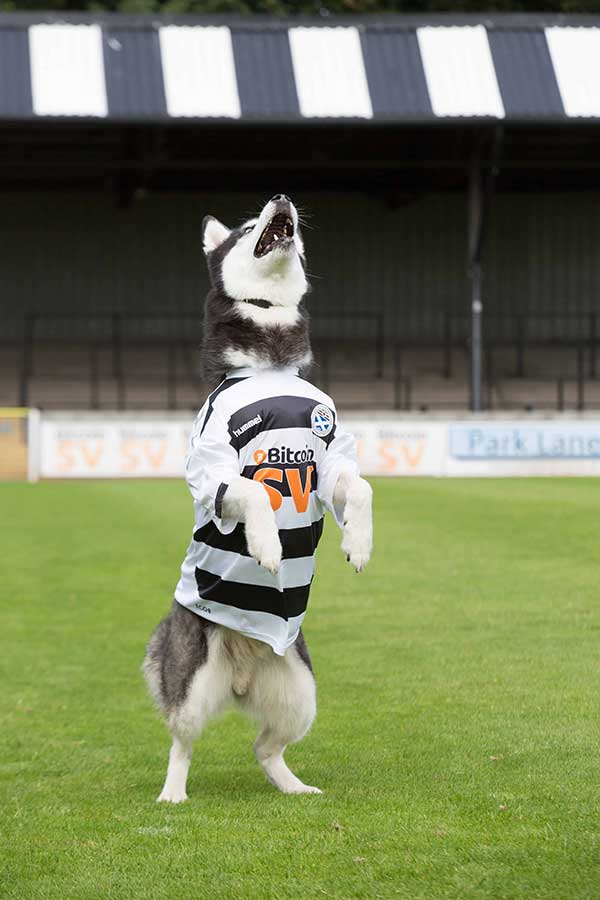 Calvin Ayre wanted to wish The Honest Men good luck too, adding: “I love following Ayr United, it’s been a hell of a ride over the last decade with promotions, demotions and some Cup runs. I love the fact that Bitcoin SV, Bitcoin’s original protocol is on the shirts of the team where my ancestors came from, it’s been a great pleasure and privilege to support Super Ayr United!”

Bitcoin SV (BSV) is the world’s only, unboundedly scaling public blockchain. This gives BSV a global monopoly on being used to solve enterprise data management and valuation challenges. The BSV enterprise blockchain is also the only platform that scales to enable the exchange model of the future that facilitates users to digitally tokenize anything in the world. This opens up amazing new business models like the ‘Internet of Things.’

*whose namesake, Paul Pogba, was Man Of The Match in a pre-season friendly for Manchester United against Ayr at Somerset Park. He later went on to become the most expensive football player on the planet (see attached picture with long term sponsor Calvin Ayre).

The Bitcoin Association for BSV, the Switzerland-based global non-profit industry organisation that supports the use of the Bitcoin SV blockchain, is pleased to announce the appointment of Marcin Zarakowski as its new Managing Director.

nChain, a global leader in blockchain research and development and delivery of blockchain solutions for enterprises and governments, today announces the appointment of Patrick Prinz as its new Chief Operations Officer (COO).

KlimaDAO is a DAO that is driving the development of the Voluntary Carbon Market by building infrastructure that makes the market more transparent and accessible.